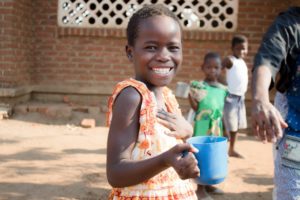 International school feeding charity Mary’s Meals is now reaching more than two million children in 19 countries with life-changing meals every school day, thanks to an impressive grassroots movement taking action all over the globe.

The landmark achievement of the charity feeding 2 million children every school day will be officially announced and celebrated in the remote desert region of Turkana, Kenya, where communities serve the much-needed daily meals to children attending Early Childhood Development centres. One of the children will make the announcement, which will be broadcast as part of a celebratory online event at 8pm (CAT).

The virtual event is open to all and will include reflections from the charity’s founder, Magnus, as well as highlights from the celebrations in Kenya and contributions from hundreds of members of the Mary’s Meals global family.

“Today we celebrate an amazing moment in the Mary’s Meals story. Today, two million children ate Mary’s Meals in a place of education.

“When we set out on this path nearly 30 years ago we were overwhelmed by people’s goodness in donating – and that’s been the story ever since. I thank you with all my heart on behalf of each of those children, for every bit of hard work, for every gift given, for all those unique things each person brings to this enormous Mary’s Meals’ table. Thank you, and please let’s keep going forward.

“For every one of those children that ate today, many more are still waiting for Mary’s Meals to come to their school, so we go on. But this happy day shows us that this vision of ours is possible.”

The charity had humble beginnings to say the least: a one-off good deed from a shed in the Highlands of Scotland eventually led to a small school feeding programme in Malawi, aiming to bring vital meals to around 200 children in two schools while they learned. Now more than 30% of the primary school population of Malawi, about 1,043,455 children, enjoys the nutritious meals, served in schools by local volunteers who are determined to help the next generation to build a brighter future.

Serving daily meals in a place of education helps even the most vulnerable children to attend school and concentrate in lessons, giving them the freedom to learn and the chance to fulfil their potential.

MacFarlane-Barrow often states that the charity’s impressive growth is fuelled by countless acts of kindness from people from all walks of life. The growing global movement – which now has fundraising affiliates in more than 15 countries – has allowed the school feeding programme to expand and continue reaching out to children in the greatest areas of need, often working with local partner organisations in more remote or challenging areas.

Mary’s Meals not only feeds huge numbers of children attending government-run schools in Africa, but also brings daily meals to children finding hope in non-formal education centres in India; the sons and daughters of vulnerable migrant workers in Thailand; young people engaging in education while awaiting trial in prisons in Niger and Madagascar; children affected by the ongoing conflict in Syria – through feeding programmes in Aleppo and neighbouring Lebanon; and many thousands of young learners in Haiti, which has been plagued by years of political unrest and damage from natural disasters.

Mary’s Meals recently published a five-year impact study showing promising results in reducing child hunger, giving children energy, improving children’s wellbeing and helping more children to access education. The charity believes that a steady supply of food in school is changing the story for young people who might otherwise be working or begging for their next meal or too worried about hunger to engage in lessons.

And this latest milestone has prompted changes to another story – the founder’s bestselling book The Shed That Fed A Million Children, which has been fully updated with a new preface, chapter and epilogue and will be published by HarperCollins (in English) on 30 September 2021.

The new material charts the journey of the last six years (since the announcement that Mary’s Meals was feeding one million children each school day) and includes reflections on the way the global pandemic played out for the charity and its partners, and the communities serving the meals. Magnus also gives a harrowing account of conversations with a close colleague working on the front line in Tigray, Ethiopia, to bring assistance and comfort to those fleeing violence across the region.