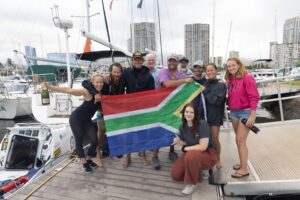 This endeavour is the world’s first solo, wing foil, transpacific crossing, and surpasses Bertish’s previous world record for the longest distance travelled on a wing-foil, solo and unsupported at 212 miles achieved in June 2021.

The TransPacific Wing Project’s mission is to raise awareness of climate change and climate action while enriching minds through ocean conservation and ocean education. 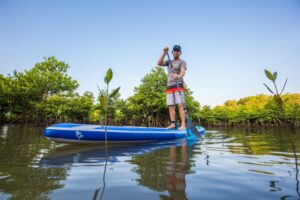 Starting with his late May 2022 launch from Lighthouse Point in Santa Cruz, California, Bertish achieved faster time than planned, arriving in Honolulu after 48 days, 15 hours and 15 minutes at sea. This journey required Bertish to complete the equivalent of more than two full marathons per day, winging a minimum of 8-12 hours per day, unsupported and completely unassisted. To aid in climate change efforts, Bertish’s craft, named Impifish was carbon net-zero, powered solely by wind, solar energy and hydropower.

The first four weeks of his adventure included battling big waves, strong wind currents, stormy seas, thick fog, freezing cold, and constant wet weather. He anticipated extreme conditions immediately leaving the California coast and employed strategies to counteract perilous conditions of fog, choppy waters, trade winds and dangerous waves. Such weather conditions abated for the latter part of his voyage as he ventured out further west into the Pacific Ocean and out of local wind anomalies.

“It’s an unbelievable feeling to set a goal that appears insurmountable, do all that you can to achieve it, and reach the finish line far sooner than expected,” said Bertish.

“The first part of the trip was super intense due to extreme weather and coming into the Hawaiian Island with Tropical Storm Darby on my heels, making for some of the most extreme and scary ocean conditions I have ever experienced.” 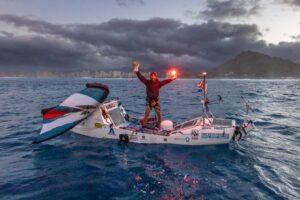 To immerse supporters in his experience, Bertish shared a tracker during his 2,550–mile journey across the Pacific Ocean, posted weekly “Captain’s Vlogs”, and shared valuable ocean temperature, and plastic and noise pollution data that he collected along the way. During his oceanic travels, Bertish has observed fewer sea creatures and whales than anticipated and had the company of sea birds including black stormy petrels and the Laysan albatross. Data collected included plastic pollution and polystyrene fish nets, plastic bags and Styrofoam, all logged for Citizen Science, which will be shared with the environmental organization, Parley for the Oceans and University of Hawaii at Manoa.

“I don’t think the extreme conditions were nearly as frightening as the amount of ocean pollution I saw along the journey,” commented Bertish.

“I only saw five fish, but saw 67 pieces of floating polystyrene and plastic, and that in itself tells us how much of a global crisis we really are in and how important these kinds of projects are, to create awareness for these issues and be the change we want to see in the world. As my famous mentor and global icon, Mr. Nelson Mandela has always said, ‘It always seems impossible until it’s done.’ By living in that practice as I do each and every day, we can all achieve far beyond our personal expectations of ourselves. We can achieve literally anything, even the seemingly impossible. We are in a race against time, a race we have to win. We need to stand up, collaborate, and take action against climate change and the pollution crisis now!” 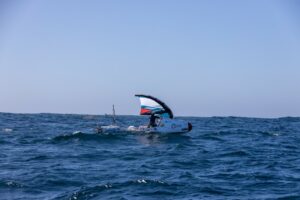 Along the journey, Bertish hosted a pre-recorded “Ocean in Motion” virtual classroom to give back to education. Class episodes were released on YouTube during the expedition. Chris hosted classroom session discussions with experts across ocean health and climate change challenges, focusing on solution-driven thinking and how all humans can minimize their negative impact, take action, and mitigate the effects of climate change.

The TransPacific Wing Project is raising money and awareness for ocean conservation through partnerships with Conservation International and Sea Shepherd, all facilitated through the Chris Bertish Foundation, a 501c3 organization established in 2020 with the goal of building awareness, giving back and being a beacon of inspiration and positive change for youth and the world.

Chris Bertish is driven by passion and commitment and has achieved some of the greatest feats in surfing and stand up paddle boarding history. He is a waterman who turns adversity into opportunity and no challenge is too great or impossible for him. As an international speaker, Chris inspires audiences with stories of courage, determination, resilience and overcoming insurmountable odds to achieve seemingly goals and dreams, while raising awareness for challenging ocean conservation and climate change issues globally.