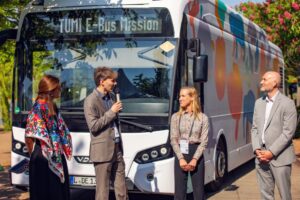 Headlining the launch of the TUMI E-Bus Mission at the International Transport Forum in Leipzig were Angela Maria Orozco, Minister of Transportation for the Republic of Colombia; Jens Giersdorf, Head of the TUMI initiative at the Deutsche Gesellschaft für Internationale Zusammenarbeit (GIZ); Heather Thompson, Chief Executive Officer for the Institute for Transportation and Development Policy (ITDP); and Ben Well, Director of Integrated Transport & Innovation at WRI Ross Center for Sustainable Cities.

Often referred to as the “greenest city in the world,” Curitiba, Brazil, has long been held as a model for urban sustainability due to its green space, recycling programs, environmental education – and especially its extensive system of dedicated-lane bus rapid transit.

But what of the buses themselves? As of 2020, only 4 percent of Curitiba’s buses were hybrid and none were electric. The city wants to move one-third of its buses to electric by 2030 and completely decarbonize its fleet by 2050 — and it is receiving strategic planning and technical assistance from the Transformative Urban Mobility Initiative (TUMI) E-Bus Mission.

Developed from the Action towards Climate-friendly Transport Initiative launched at the 2019 UN Climate Action Summit, the TUMI E-Bus Mission supports 20 deep dive cities, including Curitiba, in their transition to electric bus deployment. These cities – all in the Global South – were chosen based on readiness, potential for GHG mitigation, and sphere of influence. 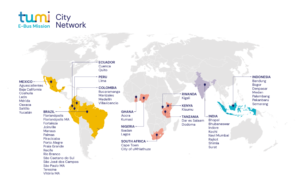 Expanding to a broad learning network

Now TUMI is expanding its E-Bus Mission to a larger learning network of cities across India, Indonesia, Africa, and Latin America – the first of its kind in the Global South. Through the TUMI E-Bus City Network, co-led by ICLEI and the International Association of Public Transport (UITP), member cities benefit from shared knowledge and resources, exchanging both best practices and lessons learned while seeking to accelerate the transition to e-bus fleets.

The TUMI E-Bus Mission is aiming for 100 network cities by 2022 and 500 by 2025. The initiative is a peer-to-peer exchange as well as capacity building for cities at different stages of procurement to plan and implement electric buses. While the 20 deep-dive cities already have concrete goals to electrify their bus fleets over the next few years, network cities can learn from the experiences of the deep dive cities in setting and implementing goals of their own. 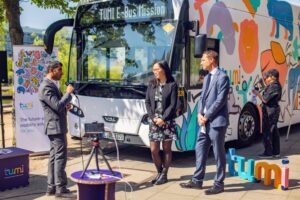 The purpose is not simply to increase the number of electric buses, but also to incentivize maturation of e-bus technology, leading to mass rollout worldwide, said Jens Giersdorf, Head of the TUMI initiative at the Deutsche Gesellschaft für Internationale Zusammenarbeit (GIZ), which is implementing the program on behalf of the German Federal Ministry for Economic Cooperation and Development (BMZ).

“The deep dive cities are important to creating a mass market for e-buses. Most of these are large cities, and their goals for electrification of public transport will shape national and regional markets. It will be easier to reach economies of scale,” Giersdorf said.

“The regional city networks are important to share these experiences, discuss challenges for smaller cities, and further scale up e-bus deployment.”

The ultimate objective is for both deep dive and network cities across the Global South to procure more than 100,000 electric buses, reducing greenhouse gas emissions by more than 15 megatons as well as curtailing the particulate air pollution and noise pollution from gasoline or diesel-fueled urban bus fleets. 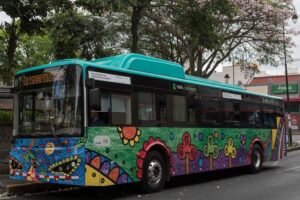 Such an ambitious goal is not without challenges. Electric buses have much lower fuel and maintenance costs, but higher up-front purchase costs, so cities need to develop new business models to plan for procurement. An extra layer of complexity is added in cities where bus fleets are owned and operated by several different public and private entities.

Having a learning network for cities making the e-bus transition — including requirements for data collection, transparency, monitoring, and evaluation — is critical to meeting these challenges. “The work in the deep dive cities can help to build transparency and data on key performance indicators of e-buses. Depending on region, geography, or even air conditioning usage, charging infrastructure and bus schedules may need to be adjusted,” Giersdorf said.

Besides GIZ, partners for the TUMI E-Bus Mission initiative include C40 Cities, ICLEI – Local Governments for Sustainability, Institute for Transportation and Development Policy, International Association of Public Transport, International Council on Clean Transportation, and World Resources Institute. The project is funded by BMZ. 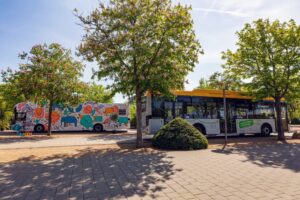 “It is important for cities to learn and exchange experiences and discuss planning and implementation of innovative solutions to common problems. This is the case for electric buses where there is a huge potential for cities in the Global South and emerging economies to leapfrog and accelerate transport decarbonization.”

“At UITP we work every day to advocate for the necessary cause of clean modes of transportation and collaborate with our members worldwide on solutions that enable change,” said Guido Di Pasquale, Co-Director of Knowledge and Innovation at UITP. “It is projects such as the TUMI E-Bus mission that facilitate the exchange of knowledge and ensure the key potential of electric buses is translated into action across the world, in particular the Global South.”