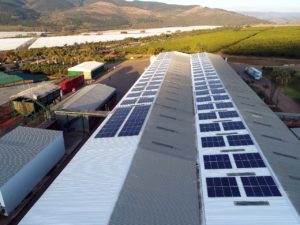 One of South Africa’s largest citrus farms are celebrating their second solar-versary. Their 265.98 kWp roof-mounted solar plant, that is made up of 806 x 330Wp Canadian Solar Photovoltaic panels, was commissioned in June 2019 and has been harnessing the sun’s energy and converting it to electricity to power the farm ever since.

Joubert en Seuns is a well-established farming operation based in Schoemanskloof, Mpumalanga. Over the years, the brother duo, Kobus and Francois Joubert converted their father’s vegetable and maize farm into a large-scale citrus production and packing business.

Now focusing on citrus, including Lemon, Navel, Valencia, Mandarins and others, as well as Macadamia nuts, they currently export in excess of 9 000 tons of produce to the northern hemisphere each year, with approximately 2 000 tons going to the local market. 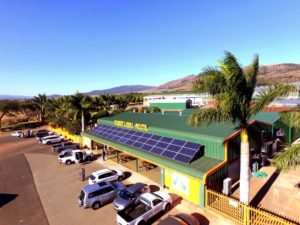 685 hectares of the 1 000 hectares under irrigation on the property are dedicated to various citrus orchards, with the rest allocated to Macadamia trees.

Complementary to the farming business, Joubert en Seuns operate a much-loved farm stall on the arterial road connecting Mpumalanga and Gauteng, renowned for its freshly squeezed orange juice and local produce. This popular stop for tourists and business travellers in the area is on the same property as the packing warehouse.

The solar plant was built by New Southern Energy. 768 panels were mounted on a large flat section on the pack house roof with an additional 38 panels on the farm stall roof for visibility from the road, that also contribute to the overall renewable energy share. This way, their commitment to renewable energy is loud and clear for all to see. 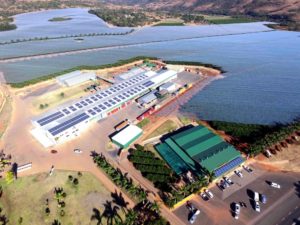 Since the installation of the solar plant, the farm’s electricity bill has decreased between 33% – 38% per month, depending on the property’s energy usage. Initial calculations estimated that the solar plant would amortize itself within 6 – 7 years. However, due to increased electricity costs and the high efficiency of the solar system, the system will now amortize within an estimated 4,5 years.

While the solar plant has significantly reduced the carbon footprint of the farm, Joubert and Seuns are concurrently busy with other interventions, such as the “Farming for the Future” certification, to ensure that their farming practices are as sustainable and beneficial to the environment as possible.

This is a grid-tied system, meaning that it is connected to the national electricity grid. 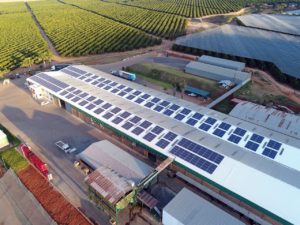 “The long-term goal is ultimately to export the surplus electricity produced by the solar plant in off-peak months so that others can also benefit from our system, once we are able to finalize an export agreement with the regulator” explains General Manager Lionel Eva. “In the meanwhile, the solar system has not only been a valuable contributor to our operation, but also a great conversation starter with regular questions being asked about it by intrigued visitors to the farm stall,” he added.

“The system’s performance is monitored and controlled through a master controller, which can also communicate with the system’s inverters. All of the data is logged and saved in cloud-based storage,” said David Masureik, CEO, New Southern Energy.

“Furthermore, the performance can be monitored in real time via a smart phone app, meaning that faults can be identified and rectified quickly,” he added.