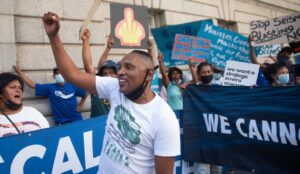 Just months after two separate High Courts granted interim urgent interdicts against two different seismic surveys off the East and West Coasts – both predominantly as a result of insufficient consultation with affected communities – Tosaco Energy received authorisation from the Department of Mineral Resources and Environment (DMRE) to proceed with seismic blasting in Block 1 (from Alexander Bay to Hondeklipbaai, off the West Coast of South Africa), despite communities’ calls for improved public consultation.

Last week, following the submissions from small-scale fishers in Alexander Bay, Port Nolloth, Kleinzee, Hondeklipbaai, and Kommagas, The Green Connection also lodged its appeal against the authorisation granted to Tosaco.

According to the Green Connection’s Community Outreach Coordinator Neville Van Rooy (pictured above), who recently visited several communities in Northern Cape, these communities are fighting similar issues that ultimately led to the interdicting of the Shell and Searcher projects, in the first place.

“First there is a similar lack of meaningful consultation with those who would be affected. During interactions in Kleinsee and Hondeklipbaai this week, communities said that they clearly requested that Tosaco’s consultants Environmental Impact Management Services (EIMS) come back to do proper consultation at more suitable times. The fact that most of the fishermen were not available to attend the meetings should have been an indication that they face many limitations and challenges, which should have been taken into account,” says van Rooy.

Also, since many fisherfolk do not have access to the internet, it is impractical to have consultations over Zoom, excluding many of those people who will be affected from participating in the Environmental Impact Assessment (EIA) process. This is why communities believe that this approval is not only unacceptable but also illegal. By now, as demonstrated by the Shell and Searcher cases, Tosaco and any others who have the idea to pursue offshore oil and gas in South Africa must know, that proper consultation with the people is not negotiable. Equitable and effective participation in the decision-making process as required by the National Environmental Management Act (NEMA) must be ensured,” says van Rooy. 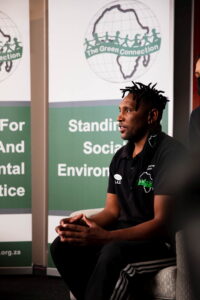 The Green Connection says it also questions the legality of the environmental authorisation, since it was during the pre-application phase already, that EIMS and the Petroleum Agency of South Africa (PASA) had decided that two specialist studies would suffice, without affording relevant stakeholders an opportunity to comment on this pre-application decision.

Van Rooy says, “However, if we consider the judge’s finding in the Searcher interim interdict judgment, applicants who want to conduct seismic testing are required to meaningfully consult with small-scale fishers and fishing communities that rely on the oceans for their livelihoods and culture, and cannot only rely on desktop studies to understand the impacts of seismic testing operations, especially since there is a growing body of scientific evidence exposing the negative impacts to marine life and ecosystems..”

In addition to the procedural issues related to the granting of the authorisation, the evidence is clear that seismic surveys do cause direct and indirect physical harm to individual species and marine ecosystems. The Green Connection also submits that, based on expert advice received, the mitigation measures proposed by Tosaco would not effectively prevent the likely harm caused. And since the seismic activities involve loud explosions (from airguns) in the ocean, The Green Connection considers the lack of acoustic modelling relevant to this area, as another fatal flaw in the assessment. Evidence shows that marine species will be affected, even “mortally injured as a result of the seismic survey.” 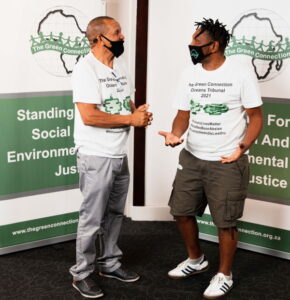 The Green Connection believes that because it underestimated the potential extent, range and magnitude of the impacts of the proposed seismic blasting, EIMS and Tosaco also failed to adequately consider the effects on the small-scale fisheries sector. For instance, according to EIMS, small-scale fishing activities take place much closer to shore than it really does. However, the reality is that some fishers venture much deeper offshore to reach fish stocks. The assessment also underestimates the effects of seismic surveys on the behaviour of fish, particularly hake and snoek, within the 3D seismic survey area. As a result, it also underestimates the potential impact on catch rates and the knock-on effect such impacts would have on small-scale fishers and communities that rely on fishing for their livelihoods and culture.

Samantha Cloete from Kleinsee says, “Already we are seeing a difference in the snoek catch which, during this Easter period, used to be abundant, there was not enough space to store all the fish. However, we have seen a decline in snoek stock over this period, which I believe is a result of the offshore oil and gas projects happening in our oceans. This, along with the lack of meaningful public participation with the local communities that will be affected, are some of the main reasons that we reject Tosaco’s application to explore our ocean for more oil and gas. We want an inclusive and socially owned projects that are in line with the just transition and which addresses the climate crises. We want wind and solar energy. These not only have economic potential but also will not harm our environment.”

Due to the lack of consideration for these small-scale fishers, community activist Andy Pienaar from the Kobush Development Association says, “We are shocked and disappointed that our government has given Tosaco the go-ahead to do a seismic survey. We are also disappointed that the consultant did not explain the document in our languages and in a way that ensures we understand the information. This was something we had previously specifically requested, in addition to requesting that they acknowledge and recognise the indigenous and local knowledge of the people here.”

Pienaar says, “The lived experience and reality of our communities must be considered and should have formed part of the application. But there is no evidence of this in this cut-and-paste document because it does not include inputs from local small-scale fishers, nor does it include inputs from our community elders. This is very disappointing. We hope that the authorisation will be set aside on appeal and that there will be other opportunities for our voices to be heard.. However, as it stands, we are extremely dissatisfied with this entire process.”

Concerned citizen Dawie Markus from Hondeklipbaai says, “What they call consultation is not what we consider to be consultation, where they force decisions down our throat. As small-scale fishers, we are concerned about the potential negative impacts on our ocean and environment. We have been completely blind-sided with this project approval because we know little-to-nothing about it. But what we do know is that seismic testing in our ocean will harm marine life and the marine ecosystem and as a result, is likely to affect our livelihoods, for us here on the West Coast. We cannot allow government to force such bad decisions down our throats.”