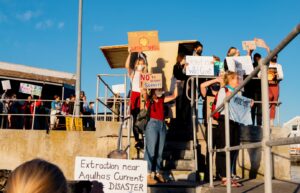 In the run-up to next week’s highly contentious court hearings to stop Shell’s seismic surveys and any further bids to explore the Wild Coast for offshore oil and gas, communities in the Eastern Cape are speaking out against traditional leaders who, at the end of April, following secret meetings with Minister Gwede Mantashe (in February 2022), agreed to support oil and gas developments. However, the communities, who are applicants in the case, were not consulted.

In the Makhanda High Court decision (28 December 2021), the court found that Shell’s consultation with affected communities, many of whom are small-scale fishers who rely on the ocean for a living, was insufficient. The judge found that the consultation process was substantially flawed, ruling that a “king” cannot make representations on behalf of all community members. Judge Bloem therefore interdicted shell from continuing until the matter could be fully debated in court.

From 30 May to 1 June, next week, the court battle continues. Communities argue that Shell needed an Environmental Impact Assessment (EIA) under the National Environmental Management Act (NEMA) and that there has been insufficient consultation. They also believe that the environmental harm that will take place during the seismic surveys could undermine livelihoods and customary practices in the ocean. If the court action succeeds, this will have a significant impact for any further offshore oil and gas exploration and should serve to promote good governance of our oceans.

The Green Connection believes that due to the climate crisis, we should halt all oil and gas exploration and that we should protect our oceans and support those communities whose livelihoods depend on a healthy ocean.

Spokesperson for the Amadiba Crisis Committee in Xolobeni Nonhle Mbuthuma says, “I am not surprised that the traditional leadership in our region are welcoming the seismic surveys. There is a clear conflict of interest here. These traditional leaders, who consulted with and support the Minister of Mineral Resources, are currently on the payroll of the State. So, it makes no sense to claim that these should be viewed as meaningful public consultation with the affected citizens because they were, in fact, consulting with state employees, not with civil society.”

Mbuthuma says, “The Amadiba Crisis Committee has long been fighting for our right to say “No, to mining!” We demand that our government start to respect our communities, rather than undermine us. It is our constitutional right that when developments are proposed, communities MUST be consulted. Furthermore, this top-down approach is an insult to our customary law. You cannot just consult traditional leaders and think it is done deal. Traditional leaders are only leaders because of the people.”

Cromwell Sonjica From Amadiba Administrative Area Eastern Cape says, “It is an insult to the people that traditional leaders take decisions without consulting communities. This is a great shame for our local community. These decisions to conduct seismic surveys were taken without considering the environment. It makes me both sad and angry that our traditional leaders are being negatively influenced by big corporations who do not take the climate crisis, which is hitting us the hardest, into consideration, especially since we want to promote more eco-tourism and agroecology for more sustainable living. In terms of customary law, the people must be consulted, not only traditional leaders.”

Provincial Coordinator for the Eastern Cape Environmental Network (ECEN) Owen Sibusiso Ndidi says, “Honestly, we are not surprised that these traditional leaders support Shell’s seismic surveys. These are ‘leaders’ who have a long history of taking decisions on their own. They then introduce development projects and programmes in villages, many of which ultimately fail because they went ahead without any consultations with their communities. We are not surprised and frankly, we smell a rat, in this instance because we have not been informed, through any community meetings nor have we been convened traditional councils nor has the company come here to meet with us. So, in fact, this is a decision taken by the traditional leaders and not a decision taken by the people. As a network we fully support those traditional leaders who demonstrate that they have the interest of the people at heart. These leaders respect the views of their communities and promote meaningful dialogue, and who ultimately seek to support a sustainable future.”

ECEN’s Zukisa Mankabane says, “I am not shocked that the traditional leaders have agreed to the seismic surveys for the exploration of oil and gas. These traditional leaders get paid by government to get support of such projects. However, we are against this process, as seismic surveys will lead to harm to the environment, which will affect our fishing activities. We want our fishing rights to be protected. We live through fishing in the ocean. There are people within the community who have fed their children and taken them to school through the money they make from fishing. Some of their children are now successful from that upbringing. We are tired of being promised temporary jobs. Down with seismic survey down!”

Small-scale fisher Ntsindiso Nongcavu from Port St John’s says, “The statement made by the Nyandeni leaders about supporting Shell seismic surveys, while ignoring those who do not, means there is a divide between traditional leaders and fishers. These leaders never consulted with the people that will be affected by the surveys. We are already experiencing the consequences of global warming and climate change, and the more they exploit the remaining offshore fossil fuels, the more it will impact us and our ability to sustain our livelihoods. While these leaders receive salaries from the State, we are the ones who go to bed hungry when there is no fish to catch or when we are barred from entering the ocean. Also, we know of the devastation Shell has caused in other places and we do not want that here. We therefore continue to oppose oil and gas as well as seismic surveys! We repeat, we are totally against seismic surveys!”

The Green Connection’s Community Outreach Coordinator Neville van Rooy says, “There is a clear and persistent trend of government and oil and gas companies seemingly refusing to engage with the coastal communities who will be affected by these offshore exploration and extraction activities. Over the past year alone, The Green Connection has called out numerous occasions of insufficient meaningful public consultation on decisions that may significantly affect the environment, particularly the ocean, as required by the National environmental Act (NEMA).”

“Coastal community representatives and supporting civil society organizations highlight that South Africa has a long history of communities being excluded, from colonial to apartheid times until now. Is this an attempt to capture traditional leadership? What is this new language of stakeholders? Who are the stakeholders? Where are the communities? The rights of people to secure livelihoods are being taken to the dustbin. Nothing that the minister says appears to acknowledge those who are directly affected,” says van Rooy.

From Saturday 28 May to Monday 30 May, a number of gatherings are planned in various locations around the country, in support of coastal communities’ calls to stop all offshore oil and gas projects. The Green Connection will be in Gqeberha on from Tuesday 31 May, to support communities at court.