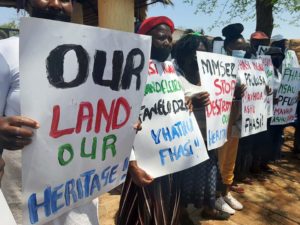 As the world prepares for COP26 (starting on 31 October 2021 in Glasgow Scotland), a small community in the far north of Limpopo province grow increasingly concerned about the potentially devastating impacts of the proposed Musina-Makhado Special Economic Zone (MMSEZ) mega-project.

The women of the Mulambwane Community – about one hundred of whom held a peaceful demonstration at Lekkerlag in Musina on Saturday (23 October 2021) – believe that the MMSEZ is a threat to their natural environment, a risk to their livelihoods and a huge threat to their heritage.

According to community activist VhoTshiwela Tshihuwa, “The MMSEZ, set to be a mega-polluting project, will also be bad news for the intensifying climate crises. For us, conserving nature and our heritage sites, well known as ‘Mupo’ and ‘Zwifho’, is of utmost importance and above everything else. Development should never be at the expense of Zwifho (heritage), Mupo (environment) or people’s health. We reject the entire Environmental Impact Assessment (EIA), which did little to convince us of the benefits or explain the costs (we believe there will be many costs). Furthermore, too many from our communities were not involved and did not have their say. This leads us to believe that we do not matter to government nor these developers and this is why we commit to continue raising our voices against this development.” 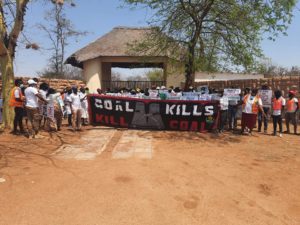 Tshihuwa says the Mulambwane Community Women hope, as the climate discussions unfold at COP26 over the next few weeks, that Limpopo Economic Development, Environment and Tourism (LEDET) will review its decisions regarding the MMSEZ. She says her community prefers that this project be scrapped, in its entirety, in favour of other, more sustainable, and genuinely developmental projects that will create decent jobs and livelihoods for communities.

She says, “In addition to the implications for the climate, from this project, we know far too little about the potential negative impacts on our precious water. From the day the project starts, everything will be affected. The trees will no longer grow the same and our livestock will not live the way they used to. South Africa already has a water shortage problem, how can we be willing to risk even a drop? And in our already water-scarce province, where will the MMSEZ find the water to sustain the project? To us, water is more than just a basic need, it is woven into our culture. If our rivers and other water supplies are affected, where will we perform our rituals?”

According to Tshihuwa, claims that the community had agreed to the relocation of ancestral graves are untrue. She says, “According to our people and our cultural heritage, nothing should be touched, and our land should not be interfered with.” 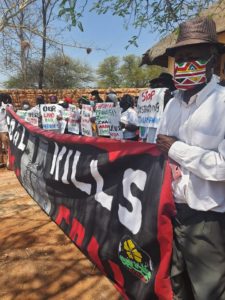 She continues, “The community of Mulambwane do want and need development and jobs but we do not want it through destructive projects, such as the MMSEZ. We are the owners of this land, and we want this land to be used in a good way, so that our communities can thrive, and our children have a future to look forward to. Our people do not want to work in mines any longer. We cannot allow the lives of our youth to be cut short, as it was with their forefathers. We are talking about jobs that will benefit the villagers, a way that works for all of us. We need jobs, but we do not want this project. There are things such as agricultural projects which are more sustainable.”

“Deforestation and removal of our bushes, to make way for their structures, will only worsen our air quality. Already we are in a bad situation. There are things we used to have that are no longer there because of damage cause by previous projects. Projects like MMSEZ have both reversible and irreversible effects. We need to focus on reversing what we can, instead of causing more irreversible damage,” commented another community member, at the recent People’s Eco-Mapping Hearings (held in Makhado, last month.)

On top of the environmental risks, there are also concerns about what social implications such a large project would have on the surrounding communities. Issues around safety of local women and children, is top of mind. 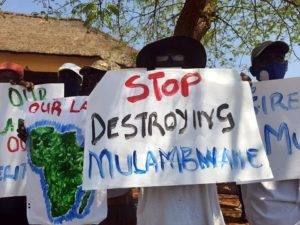 “Even before the project has started, we feel disrespected by our government and the company trying to push through this project. What will happen once they are here with all the equipment and workers? This is why we must continue to fight for our land.”

Earthlife Africa Johannesburg’s Coal Campaigner Thabo Sibeko, “Southern Africa is warming at twice the global average and is therefore considered a climate change hotspot. It is projected that our region will become “drastically” warmer and drier, which will have devastating consequences, ultimately limiting our options for adaptation. By ignoring the climate science, by pursuing projects like the MMSEZ, we jeopardise the #JustTransition, putting more of our people in harm’s way and further disadvantaging our vulnerable communities. South Africa must cut its current rate of emissions to keep global warming below the new goal of 2 ̊C. By now, from what the climate science has revealed, South Africa already be robustly investing in renewable energy projects, rather than piecemeal proposals. The SA government must stop pursuing fossil fuel projects. These will only aggravate the rapidly deteriorating climate situation.