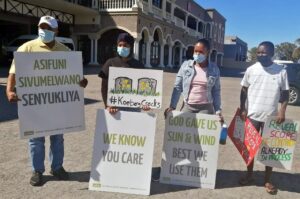 The Southern African Faith Communities’ Environment Institute (SAFCEI) joined communities and other eco-justice NGOs – including Project 90 by 2030, Koeberg Alert Alliance, 350 Africa, the Federation for a Sustainable Environment, and more – for a peaceful demonstration outside the National Nuclear Regulator’s (NNR) offices in Table View, Cape Town on Thursday.

According to SAFCEI’s Executive Director Francesca de Gasparis – who handed over a memorandum of demands to the NNR – the picket aimed to draw much-needed attention to the need for increased transparency from the regulator, during a period where critical and far-reaching decisions are being made.

“The suspension of the NNR Board’s community representative is a pressing issue because the public has no representative on the board, while the NNR continue to make critical decisions about the country’s nuclear energy future. According to the NNR Act and Board composition, the purpose of the community representative is to represent the views of who may be affected by nuclear activities, whether or not these are pro- or anti-nuclear is not stipulated. In our view, for Minister Gwede Mantashe to state that someone cannot be on a regulator board because they are anti-nuclear, weakens our nuclear governance. Surely the representation on the board should reflect a diversity of views to better ensure the effective oversight of nuclear safety regulation. Those who ask the tough and uncomfortable questions about this outdated and dangerous technology, should not be silenced through exclusion from the board,” says de Gasparis. 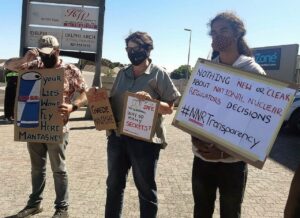 “It is already unacceptable that for the better part of the past decade, South Africa’s National Nuclear Regulator has been operating without the oversight of a civil society representative on its board. Now, after just a few months, the same Energy Minister who made the appointment, has suspended Peter Becker. Mr Becker’s position on nuclear energy was known when he was appointed to the Board so to use that against him now is questionable,” she adds.

De Gasparis says, “The suspension of Mr. Becker increases the risk of a further lack of transparency around the NNR’s activities, a significant concern at a time when the NNR Board will be considering Eskom’s application to operate Koeberg Nuclear Power Station beyond its current 2024 end-of-life.”

According to SAFCEI’s Khulekani Magwaza, in a country that is rife with government corruption – as exposed in the State Capture report – we need more transparency, not less. He says, “I believe that the Minister must reinstate our civil society representative. How can it be that only the nuclear industry and other related sectors still have a voice on the board, but communities do not? We believe that Mr. Becker is a great choice because he is knowledgeable about the nuclear industry, and he consistently demonstrates that he advocates for the greater public good. If what he has done is so egregious, then why are the NNR and the Minister being more transparent about the reasons for his suspension? Do the people not have a right to know why their representative has been suspended? Right now, it feels as though the NNR is a private institution with private interests, rather than one that is accountable to the public. And what are the plans to fill the position because we still need a voice on the NNR board?” 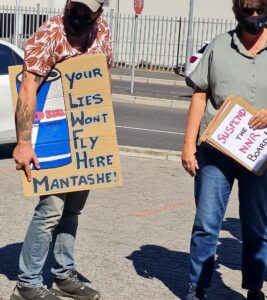 Faith leader and member of SAFCEI Lydia Petersen says, “In its role as regulator, we do not believe that the NNR exercises due transparency, as is the case with this suspension, neither does the Minister. Instead, we find Minister Mantashe playing cat and mouse games with us. The public should have received notice and reason for the suspension/dismissal already. By not doing so, public mistrust in the NNR and DMRE will continue to deepen. The question is, who will keep us informed if there is no-one there to represent our interests? As a safety measure, to protect the people, we demand that no decisions be taken by the NNR board while there is no civil society representative.”

Project90’s Gabriel Klaasen says, “It was exceptionally powerful to watch so many people of different generations and backgrounds and parts of civil society come together and call for transparency from the National Nuclear Regulator. Collectively calling for Gwede Mantashe to take action and reinstate our only civil society representative, Peter Becker, who has been suspended from the board. The time for a co-designed energy future is now! We cannot do that if our voice as civil society has been silenced.”

Minister at Assemblies of God Association Western Cape Rev. Joy Aline Chetty says, “The people of this country are not getting the service they deserve from the NNR in its role as regulator of nuclear safety. The area around Koeberg has grown exponentially since the time it was first built. Many more communities, who would be affected should there be a Chernobyl-level nuclear catastrophe, have not yet been meaningfully involved in the plans to extend the lifespan of the ageing plant (which should be decommissioned in 2024). We demand that all these processes be put on hold until our communities are represented on the NNR Board. As people of faith, we do not believe that nuclear energy forms part of South Africa’s just energy future. With the just transition, we must move away from this type of centralised energy source to those sources which are more socially inclusive and decentralised.” 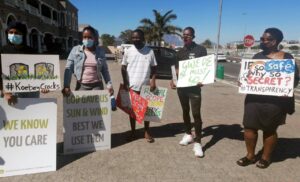 Rastafarian environmental activist from Gqeberha and member of SAFCEI’s Faith and Eco-Justice project Ricardo Swanepoel says that he has grown increasingly disillusioned with the NNR. Referring to public hearings regarding plans to build a new nuclear site in Thyspunt, Swanepoel says, “Our input is ignored. Never have we seen any written or oral statements in response to our contributions, nor have we seen anything that demonstrates that they acknowledge our inputs and how these will be reflected in government’s plans. It is troubling that we are expected to just accept these plans – like a new plant in Thyspunt or the life extension of Koeberg – and accept that government has resolved to ignore us? We are rendered dogs with no bite, as far as they are concerned as they have been steamrolling us for over a decade.”

According to Professor in Nuclear Engineering Dawid Serfontein, “The Minster indicated that to serve on the board of the National Nuclear Regulator (NNR) members cannot be anti-nuclear. Since Becker is clearly anti-nuclear, the Minister believes that that disqualifies him from the board. 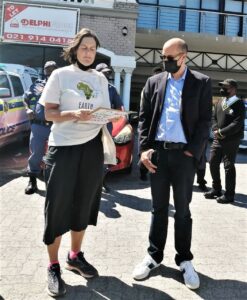 As a Professor in Nuclear Engineering, I personally know many scientists and engineers involved in running nuclear organisations in South Africa. In discussions, many of them have indicated to me that they do not accept the theory that radiation causes large numbers of cancer cases. Therefore they are AGAINST the safety measures promoted by the NNR. One could thus say that they have an anti-nuclear-safety bias. Yet, it is these people that the Minister suggests should serve on the board of the NNR, while Becker who is pro-nuclear-safety should be disqualified.

The job of any watchdog is to bark when things are wrong. Each time, when such a watchdog barks, it causes reputational harm to government. The Minister indicated that because Becker (rightly or wrongly) barked, he caused reputational harm and should thus be fired. It therefore seems the Minister wants a nuclear watchdog that is not allowed to bark! That clearly defeats the purpose of the NNR.”

Professor in the Department of Political Sciences at the University of South Africa Jo-Ansie van Wyk says, “’The Minister’s position on civil society involvement and participation runs counter to legislation (e.g. NNR Act) and the constitutional rights and obligations of both the State and South African citizens. Mr Mantashe’s position is highly regrettable and has set a grave precedent for the country’s energy future. A just energy transition also requires a just decision-making process. Democratic oversight affirms transparency and, ultimately, a respect for the people of this land. Ad hominem attacks against Mr Becker is not only unfounded but also displays government’s unwillingness to entertain opposing views. Democratic decision-making must be robust. We cannot afford Nuclear Groupthink as we proceed to consider South Africa’s energy options.” 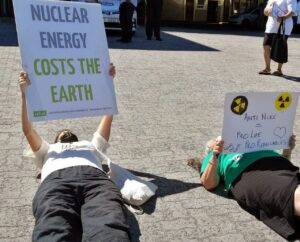