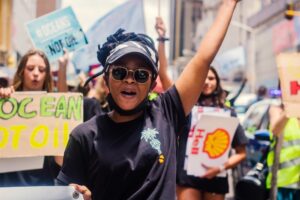 As the countdown begins to Shell’s seismic survey off the east coast of South Africa, conservationists are up in arms and are trying to beat the clock in efforts to stop Shell from following through with this operation.

Shell announced their plans to commence seismic surveys along the Eastern Cape’s Wild Coast, an area renowned for its high marine biodiversity, in just less than a week’s time.

Amazon Warrior, the survey vessel which will be conducting seismic surveys along the Wild Coast for Shell has left Cape Town and is off Port Alfred accompanied by a support vessel, the Ocean Fortune, and a guard vessel, the Astra G.

The seismic surveys are set to start on 1 December and continue for 5 months. There is evidence that seismic research conducted by a single vessel can have noise impacts as far as a 1000kms. 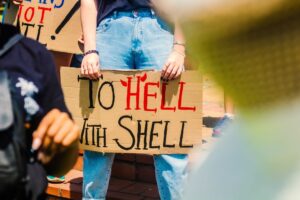 The youth of Durban delivered a Memorandum of Understanding to the Department of Mineral Resources on the 25 November 2021. Youth from Youth4MPAs, African Youth Summit, Ocean Stewards, Youth Planet and more took to the streets to show their stand against the blasting of the oceans.

Merrisa Naidoo, Youth Coordinator at WILDOCEANS said, “Developing countries, especially in Africa, have fallen victims to oil and gas giants, leaving the environment degraded, local people at war and with little to no resources remaining to sustain themselves. Shell has a history of this in the Niger delta. In Africa, mineral resource exploration has always been the exploitation of both our environment and our people.”

“We are the Youth4MPAs, a youth-led movement in South Africa comprising of more than 378 ocean advocates and ambassadors across South Africa and the African continent. We aim to promote the protection and conservation of South African oceans, create awareness about its importance, and foster the involvement of youth in crucial decision making involving the ocean. We envision having a sustainable future where marine life and society benefit from a healthy ocean.” 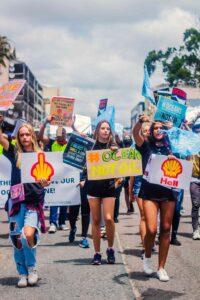 The youth are deeply concerned about the upcoming Shell seismic surveys set to take place at the Wild Coast, which falls under the Transkei Exploration Area under Exploration Right 12/3/252 between Port St Johns and Morgans Bay in the Eastern Cape. Shell exploration has tasked Shearwater GeoServices to conduct 3D seismic surveys in this area, which involves blasting the seafloor with airguns that reach sound frequencies up to 200 decibels every 10 seconds for 24 hours to detect oil and gas.

The Youth for MPAs stands firmly with many environmental activist groups, NGOs and concerned citizens in opposition to the harmful surveys and related activities scheduled for the Wild Coast by Shell. For the following reasons, we are saying #ToHellWithShell.”

Oil and gas companies use deafening seismic surveys that generate the loudest human sounds in the ocean, short of those made by explosives. Seismic testing involves blasting the seafloor with high-powered airguns (a kind of powerful horn) every 10 seconds and measuring the echoes with long tubes to map offshore oil and gas reserves. 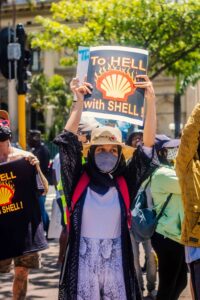 Liz McDaid, Green Connections’ Strategic Lead said, “Internationally, the writing is on the wall; Oil and gas projects just are not worth the risk. South Africa must safeguard its oceans – which is held in trust by the State, on behalf of all citizens, including future generations – to ensure that coastal communities’ livelihoods are sustained and that we are all still able to enjoy and benefit from it.

The Green Connection hopes that politicians take note and stop supporting fossil fuel extractive projects. It is the road to disaster. Furthermore, we do not believe that large amounts of gas are needed to supplement the national electricity grid, especially since renewable energy is a recognised reliable and cost-effective source of energy.”

There is growing evidence that noise from seismic surveys conducted to locate offshore oil and gas deposits result in negative environmental impacts which disturb, injure, and kill marine wildlife. Harmful effects can include tissue and hearing damage, interference with sounds used to detect prey or avoid predators, as well as behavioural changes (such as displacing some species from their feeding and breeding grounds). These harmful effects add to existing acoustic pollution of the oceans (e.g. noise from shipping and use of sonars). 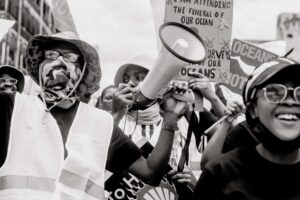 “It is extremely concerning that we are still exploring for more fossil fuels directly after we have committed to significantly reducing our emissions this month at COP 26,” said WILDOCEANS’s Dr Jean Harris.

“South Africa should be investing in green energy solutions and not undertaking unnecessary seismic activity that results in immediate negative impacts to marine ecosystems and species as well as having long-term climate implications due to continued reliance on oil and gas.”

Minister Barbara Creecy recently confirmed South Africa’s commitment to the Paris Climate Agreement at COP 26, and in the same week said that South Africa is playing its part to make COP26 a successful conference because the world is watching all our actions and that it is important that we do our best to deliver on our people’s expectations. 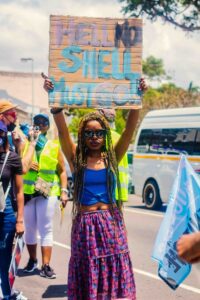 In a stark contradiction to this statement and a major cop out, the South African government has extended Shell’s oil and gas exploration permit for a further 2 years.

This means seismic surveys will start before the humpback whale migration season ends and during the peak of the turtle hatchling season. Endangered turtle hatchlings are carried passively in the fast-flowing Agulhas current from the nesting grounds in iSimangaliso MPA, and will be swept through the seismic survey area unable to void the blasting.