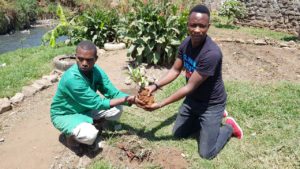 Jack Mazingira, Founder of a community-based organisation located in the slums of Nairobi called Towards Green Environment, has seen climate illiteracy first hand. 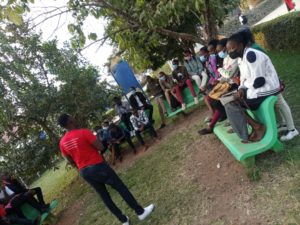 Many people have asked him to sell them climate change because they have no idea what it is. Seeing people with little to no climate awareness while living under the devastating impacts of climate change motivates Jack to wake up every day and use his knowledge to empower others.

If you know Swahili, you will know the word Mazingira – meaning environment. Jack is known to many as Mazingira since his Swahili teacher first gave him the name in primary school. Jack got his new nickname because of his passion for the environment, which has stayed with him and led him to pursue a tertiary degree in Environmental Science. During his early years, one of the things Jack enjoyed most was studying under a tree.

He even planted his first tree in Primary school – and that one tree led to a whole forest being named “Mazingira” after him. Jack also created awareness through recycling projects at school, and during his time as a head boy at Osodo Primary School, his main goal was to encourage others to take care of the environment. 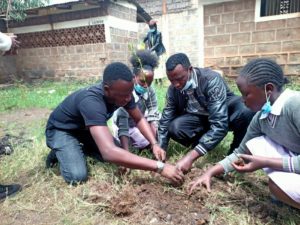 Even though Jack has always been passionate about environmental issues, he once had no idea climate change. Jack first learned about climate change in 2012 at University through an environment club. After much research and reading, Jack realized he was learning about what was already happening in his village. Jack soon became involved in advocacy work as the chairman of the environment club.

After finishing University, he visited schools, public buses, churches, and other organizations and community spaces to create awareness and educate people about climate change. Jack has a target to plant 2 million trees in the next few years and he has planted over 3000 trees so far.

As a young boy growing up in a Kenyan village, Jack experienced the impacts of climate change first hand before he even knew what climate change meant. From seeing trees cut down to make fires and to support people’s livelihoods to experiencing pollution, floods, and droughts, Jack always knew there was something wrong with how people were treating the environment.

Jack has seen how the climate crisis affects real people today, as floods displaced many people in his community, and his school was used as a haven for hosting displaced families. 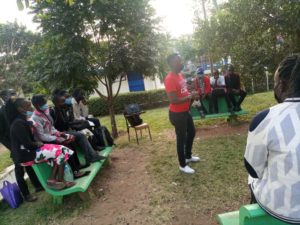 Jack has seen the most devastating impacts of climate change as well as negative human-environment interactions. For instance, community members have died from crocodiles and hippopotamus attacks as the rivers have dried out from droughts. He started placing dikes (barriers) along the banks of the river as a way to combat flooding by regulating or holding water back from a river. Due to lack of resources, he had to use temporary dikes constructed of reeds to support the river banks – unfortunately, these did not last very long.

Along with environmental impacts, the climate crisis has also contributed to job losses and increased poverty, with many families being displaced. This is due to the fact that many local companies have had to close down, and others relocated due to the infrastructure damage from flooding.

Due to poverty, people have also started sand mining – but this is unsustainable and has numerous consequences ranging from damaged roads and land degradation. Many people have lost their lives due to the infrastructure damage in roads and unstable bridges that collapse. Jack’s niece is one of the victims – her hand was amputated after an electric pole from a sand mining site fell on her, and she was electrocuted.

The Climate Reality Leadership Corps’ global training helped Jack see that he is not alone in the fight against the climate crisis. He has met other people who share the same struggles as him, which motivated him to do more. 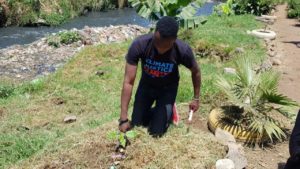 He has started an initiative called “taka taka Wednesdays” in his village; “taka taka” is a Swahili word for rubbish. Every Wednesday, Jack has clean up campaigns in different parts of the village. He has also recently started traveling the country to educate people about climate change and create awareness.

During these clean-up campaigns, Jack collects plastics and encourages people to reuse and recycle. Jack’s dream is to see the youth most affected by the impacts of climate change taking part in the policy decision-making processes and creating policies that will bring about meaningful change. He believes that educating people about climate change is the first step to achieving this.

Jack believes that the fight against climate change is a collective endeavor.

“It doesn’t matter what you are doing and how you do it, start small and grow as you go. Anything you do does make a difference in people’s lives. The impact is created by small acts done every day,” says Jack Mazingira.