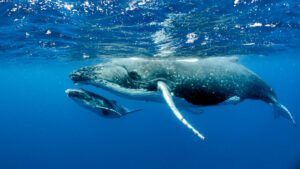 A humpback whale and its calf. To them, a seismic blast is like a bomb repeatedly going off in their home every 10 seconds – a home they can’t flee. Image: Getty

Many of us remember being told by our elders when we were young to hold a shell to our ears to hear the ocean, no matter how far you were from a seashore.

Later on one learns that it is the reverberant air moving inside the hard, curved inner surfaces of a shell’s cavity, which produces the coincidental, pleasant sound similar to waves on a shore.

Interestingly the mammalian inner ear has the spiral shell shape in order to boost sensitivity to higher frequencies. Marine mammals (especially cetaceans) have some of the most evolved ears of all mammals, capable of sophisticated, sensitive hearing and auditory processing and hear up to 200 kHz. 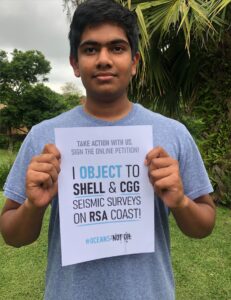 A long coiled inner compartment, rather than a short and straight one, provides more space for additional octaves of hearing range. The sense of hearing is central to cetacean sensory ecology that has enabled vital behaviours such as locating prey, detecting predators, identifying members of the same species, and navigating, however, increasing levels of man-made ocean noise are impacting many of these activities.

The fleshy external ears of humans are shell shaped, both outside and in, and our cochlea (the hollow, coiled shell-shaped bone found in the inner ear) are filled with fluid. Fluid transmits sound waves better than air does. Plus the fluid in the cochlea is a necessity for moving the hair cells and triggering the electrical impulse necessary for hearing. Trapped air alone would not be able to achieve this. Human appreciation for sound, it seems, is largely dependent on liquid and the shape of a shell, but only if the shell shape is a cavity with one opening.

The Shell Transport and Trading company, founded in the 1830s, derived its name when its British owner expanded from selling antiques to importing seashells, popular for interior décor at the time, from eastern and southeastern Asia. This established the import- export business that became a global fossil fuel major, but also the brand logo: a scallop shell. The scallop is a free-living animal enclosed by two hinged shells, flattened on one side and more concave on the other. Scallop shells don’t produce the magical sounds of the ocean when held to the ear. 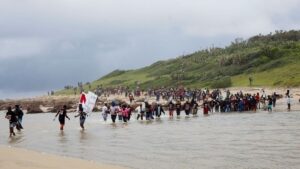 If those at Shell Exploration and Production South Africa cared to listen, they would know that scallops ‘cough’ when sea water quality becomes low through pollutants and decreased oxygen. More thoughtful environmental engagement with ocean inhabitants would reveal to Shell Exploration and Production South Africa that scallops and other bivalves represent invaluable archives of climactic data and the ocean environment, recording temperature and salinity, oxygen or contaminant levels, states of the phytoplankton in the sea in trace elements in their shells.

However, increasingly ocean acidification as carbon dioxide from fossil fuel emissions reacts with seawater to form carbonic acid, dissolves the shells of marine organisms. This harms the animals living inside them, which in turn impacts food availability in the ocean food chain and service benefits for humans. Understanding the ramifications of the profound ecological shifts stemming from these dissolving external carbonate skeletons of corals through to scallops and plankton surely brings an understanding of the supreme need for precaution against further exploration for fossil fuels?

To “throw oil on the water ”of the public outcry, over 400 000 objections voiced in the Oceans Not Oil petition and national beach protests around Shell’s seismic testing off the Wild Coast of South Africa, Shell South Africa chair Honiphizwe Mtolo declared in an open letter this last week, that seismic surveys were safe to the ecosystem of the ocean off the Wild Coast, and produced sounds similar to “many naturally occurring and other man-made ocean sounds.” 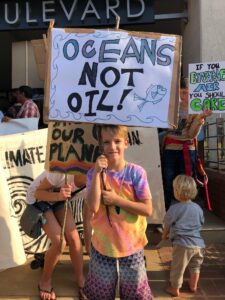 It is cruelly ironic that scallops, when exposed to seismic airgun exposure used in offshore oil and gas reconnaissance have been “found to have significantly increased mortality rates; disrupted behavioural patterns and reflex responses, both during and following exposure; and altered hemolymph (scallop ‘blood’) biochemistry, physiology, and osmoregulation capacity. These results indicate that air gun exposure has a harmful impact on scallops and raises concern over the impact on bivalves, due to their global ecological and economic importance.”

If scallops were Honiphizwe Mtolo’s children, this would be termed “conclusive evidence of irreparable harm” by seismic surveys.

That the Deputy Director-General of the Department of Mineral Resources and Energy, Ntokozo Ngcwabe, has declared that as early as the last drilling exercise by Total last year, Shell’s preparations to apply for its production right were already at an advanced stage means that the outcomes of applications are predetermined and the department is not listening to the mass response of South Africans to the application for reconnaissance, let alone exploratory drilling and exploitation. 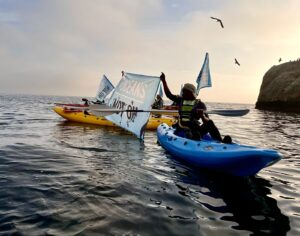 This speaks volumes about why the protests have been so loud and so vocal – South Africans, of all shapes, sizes and heritage, feel that they are not being heard. It speaks volumes about the deep lack in efficient and inclusive public hearing in offshore oil and gas development.

Mineral Resources and Energy Minister Gwede Mantashe must take care when he perversely starts calling the environmental activism around Shell’s seismic survey in Wild Coast waters “apartheid and colonialism of a special type.”

Has Mantashe actually seen and heard the traditional healers, leaders, fisherfolk who have applied for the two urgent interdicts to stop this survey? Has he not seen how united coastline communities are around this issue? Has he not grasped that the call for Oceans Not Oil is a decolonial movement that seeks alternative economic development to quicken a just transition away from fossil fuels and towards a climate resilient future? 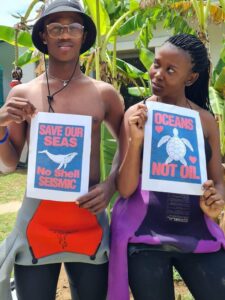 It suggests that Mantashe and his department have become too disconnected from the wider community, which hints at becoming a future political liability for the ANC.

Social movement research has found that you only need 2.5 per cent of the population to be in a political movement for it to be large enough to drive major political and social reform. That is enough for the everyone to have friends and family involved and to feel personally connected to the issue. With nearly 425 000 signatures the Oceans Not Oil movement is a third of the way there.

Oceans Not Oil awaits the results of the second urgent interdict seeking to stop Shell’s seismic survey off the Wild Coast. The matter is set down for hearing on the 17 December 2021.