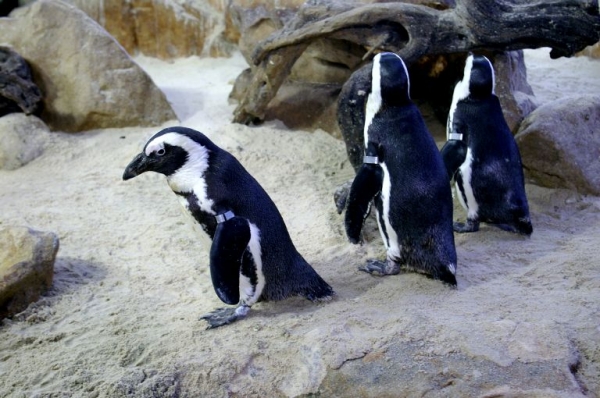 The Two Oceans Aquarium will join a number of facilities around the country to celebrate International African Penguin Day. The day is dedicated to raising awareness of the plight of the African penguin. It is estimated that only 60 000 of these birds remain in the wild and that they could be extinct within the next 15 years.

A number of activities will take place at the Two Oceans Aquarium. A mini Penguin Waterfront Waddle will kick things off. Gathering at 09h00 for free coffee, juice and face painting, the Waddlers will easily waddle their way to the Mouille Point lighthouse and back.

The route is approximately five kilometres and all are welcome to join. All Waddlers are encouraged to “bring their own bottle of water” as bottled (plastic) water is not supported by the Penguin Promises campaign.

The Aquarium’s AfriSam Children’s Play Centre will buzz with penguin arts and crafts for the day. Special screenings of the hit penguin documentary, ‘City Slickers’ will take place in the Metropolitan Think Tank while Shoreline Café, the Aquarium’s in-house restaurant, will have special meal offerings. Visitors to the Aquarium will also be encouraged to make a ‘Penguin Promise‘ in support of the Penguin Promises awareness campaign.

Only found in southern Africa

The African penguin (previously knows as the Jackass penguin) is endemic to southern Africa. They are only found from the Namibian coast in the west, to Algoa Bay in the east. These charismatic, flightless birds are classified as endangered according to the IUCN Red List of Threatened Species. Capetonians are very fortunate to have two land-based penguin colonies on their doorstep. The first is at Boulders Beach, Simon’s Town and the second is at Stony Point, Betty’s Bay. Other penguin colonies around Cape Town include Robben Island and Dyer Island near Gansbaai.

It is estimated that, at the turn of the century, the African penguin population numbered approximately 1.5 million. Today, less than 60 000 remain. The reasons for the extreme decline in numbers are both historical and current. In the past, large numbers of African penguin eggs were collected for consumption. Thousands of tonnes of penguin guano were also removed from the islands where the birds nest. This destroyed the penguins’ nesting material as African penguins dig into the thick guano deposits to create nests which shelter the eggs and the chicks. Without the guano, the nest, eggs and chicks are left exposed to the elements as well as predators. The practices of removing eggs and guano are now banned, but their effect on the penguin population has been lasting.

Today, penguins face more direct threats including oil spills and food source depletion. During oil spills the penguins are vulnerable in two ways. When a penguin is covered in oil, its feathers loose their waterproofing. The penguin is therefore unable to swim and hunt for food. Also, when the penguin tries to clean itself, it ingests the oil, which can lead to the bird’s death.

African penguins feed mainly on small, shoaling fish like pilchards and anchovies. This puts them in direct competition with humans. Studies have found that African penguins have to travel further and further away form their colonies in search of food. This is detrimental to penguin chicks as they rely on their parents for food and protection. The adult penguins are also suffering, as they have to consume enough fish to sustain them, as well as their chicks.