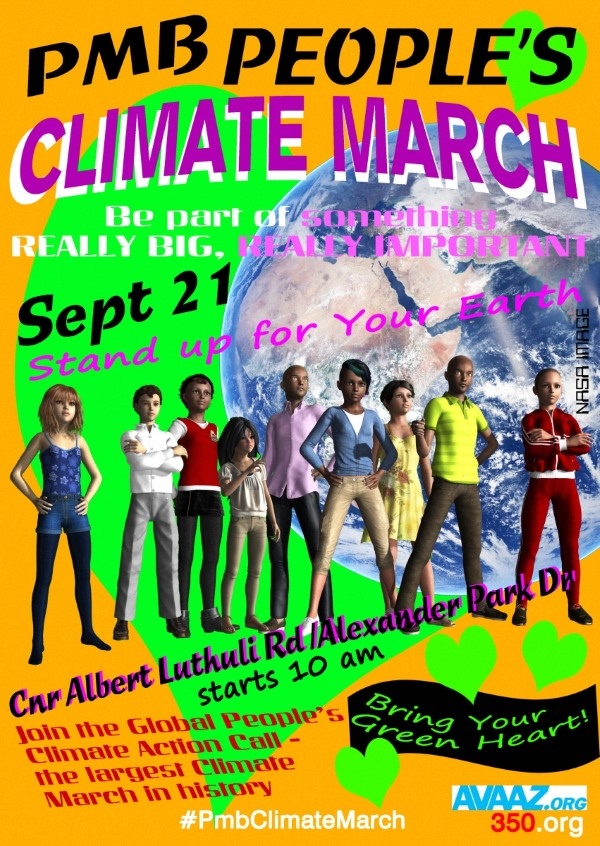 We call on you to join the Pietermaritzburg’s People’s Climate March, part of the largest climate mobilization in history, where we’ll be calling for a clean energy future for our City and Province, our people, our planet.

On 21 September, an Emergency Summit of World Leaders in New York chaired by UN Secretary Ban Ki Moon will meet to discuss a unified global response to climate change. They will be met by the People’s Climate March, made up of local, national and international civil society organizations with hundreds of thousands of supporters. At the same time, thousands of marches and petition deliveries to local governments will take place in main cities from over 88 countries around the world, demanding a maximum push to clean energy.

We the people of Pietermaritzburg request support from you, your organization, company, school, religious group or club, by bringing your group of supporters with placards & banners to our peaceful climate march on the 21st of September and signing the petition.

In Addition, citizens unable to attend the March can make their own “green heart groups” in open spaces around PMB from Friday 19 to Sunday 21st September, and post their pictures online using #PmbClimateMarch.

WHY: The overwhelming cumulative scientific evidence of human-induced climate change can no longer be disputed.
The real effects of climate change are already being felt across the world as the number of natural disasters increase.
Business-as-usual regarding fossil fuel usage for energy generation word-wide can no longer be contemplated by any nation, because such usage rates are already on-trend to push the earth’s global temperature past a 2 degrees Celsius rise, the agreed maximum safe level of increase.

Urgent action is needed by our own government to lower South Africa’s greenhouse gas emissions, the vast majority of which are from coal (Eskom is the 7th largest electricity generator in the world, and South Africa is the 11th largest carbon dioxide emitter globally).

Participants are requested to make placards and banners with relevant slogans expressing their group’s requests to our city and indeed the World’s leaders, for example “We demand a change to clean renewable energy” ,”No to More Coal-fired Power Stations”, “Let all our rooftop solar systems feed the Energy Grid”,
“Power to the people via local Concentrated Solar Voltaics”.

Join or organise a local March for Change near you on 21 September to demand the world that we know is within our reach: a world with an economy that works for people and the planet; a world safe from the ravages of climate change; a world where communities are not destroyed by conflicts over gas and oil, a world with good jobs, clean air and water, and healthy communities.

Join # We Lead You Africa here and find out about the Climate March initiatives throughout Africa and closest to you. Sign the petition to our African leaders here.