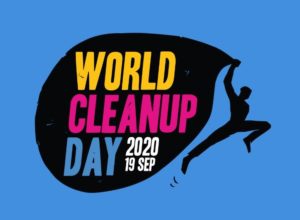 One day. One planet. One goal. World Cleanup Day is here.

On 19 of September 2020 millions of people across the globe will unite to clean up the world and raise awareness of the problems caused by mismanaged waste.

On 19 of September, volunteers and partners worldwide will come together to free our planet from trash – cleaning up litter from our beaches, rivers, forests and streets.

Last year, more than 20 million people in 180 countries took part in World Cleanup Day. It was the biggest civic action in human history, where over 100,000 tons of waste was collected.

A powerful ‘green wave’ of cleanups started in New Zealand and ended 36 hours later in Hawaii, with millions of people working towards one goal: a clean and healthy planet.

World Cleanup Day harnesses the power of everyday people to achieve incredible things by joining together. Its beauty lies in cooperation and collaboration: building bridges between disparate communities, and including all levels of society – from citizens, to business, to government.

A world changing idea with a humble beginning. The movement was born 12 years ago in Estonia, when 4% of the population came out to clean the entire country of illegally dumped waste, in a matter of hours. This captured the imaginations of people worldwide, who were inspired to follow suit with the same ambitious ‘one country, one day’ formula.

This was the beginning of a global bottom-up civic movement, Let’s Do It! World, which has spread like wildfire around the globe. The movement has grown to be the biggest of its kind in the world – uniting people from all corners of the planet to work together in cleaning the world of trash.

But, the Let’s Do It! movement has never been purely about cleaning up trash. It also works to raise global awareness and implement lasting changes to end the global waste epidemic, once and for all.