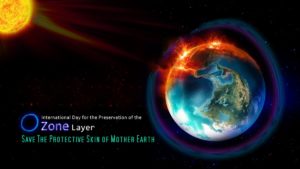 The phaseout of controlled uses of ozone depleting substances and the related reductions have not only helped protect the ozone layer for this and future generations, but have also contributed significantly to global efforts to address climate change; furthermore, it has protected human health and ecosystems by limiting the harmful ultraviolet radiation from reaching the Earth.

So, when scientists working in the late 1970s discovered that humanity was creating a hole in this protective shield, they raised the alarm. The hole – caused by ozone-depleting gases (ODSs) used in aerosols and cooling, such as refrigerators and air-conditioners – was threatening to increase cases of skin cancer and cataracts, and damage plants, crops, and ecosystems.

The global response was decisive. In 1985, the world’s governments adopted the Vienna Convention for the Protection of the Ozone Layer. Under the Convention’s Montreal Protocol, governments, scientists and industry worked together to cut out 99 per cent of all ozone-depleting substances. Thanks to the Montreal Protocol, the ozone layer is healing and expected to return to pre-1980 values by mid-century. In support of the Protocol, the Kigali Amendment, which came into force in 2019, will work towards reducing hydrofluorocarbon (HFCs), greenhouse gases with powerful climate warming potential and damaging to the environment.

World Ozone Day, held on September 16, celebrates this achievement. It shows that collective decisions and action, guided by science, are the only way to solve major global crises. In this year of the COVID-19 pandemic that has brought such social and economic hardship, the ozone treaties’ message of working together in harmony and for the collective good is more important than ever. The slogan of the day, ‘Ozone for life’, reminds us that not only is ozone crucial for life on Earth, but that we must continue to protect the ozone layer for future generations.

A number of commonly used chemicals have been found to be extremely damaging to the ozone layer. Halocarbons are chemicals in which one or more carbon atoms are linked to one or more halogen atoms (fluorine, chlorine, bromine or iodine). Halocarbons containing bromine usually have much higher ozone-depleting potential (ODP) than those containing chlorine. The man-made chemicals that have provided most of the chlorine and bromine for ozone depletion are methyl bromide, methyl chloroform, carbon tetrachloride and families of chemicals known as halons, chlorofluorocarbons (CFCs) and hydrochlorofluorocarbons (HCFCs).

The scientific confirmation of the depletion of the ozone layer prompted the international community to establish a mechanism for cooperation to take action to protect the ozone layer. This was formalized in the Vienna Convention for the Protection of the Ozone Layer, which was adopted and signed by 28 countries, on 22 March 1985. In September 1987, this led to the drafting of The Montreal Protocol on Substances that Deplete the Ozone Layer.

The principal aim of the Montreal Protocol is to protect the ozone layer by taking measures to control total global production and consumption of substances that deplete it, with the ultimate objective of their elimination on the basis of developments in scientific knowledge and technological information. It is structured around several groups of ozone-depleting substances. The groups of chemicals are classified according to the chemical family and are listed in annexes to the Montreal Protocol text. The Protocol requires the control of nearly 100 chemicals, in several categories. For each group or annex of chemicals, the Treaty sets out a timetable for the phase-out of production and consumption of those substances, with the aim of eventually eliminating them completely.

The timetable set by the Protocol applies to consumption of ozone depleting substances. Consumption is defined as the quantities produced plus imported, less those quantities exported in any given year. There is also a deduction for verified destruction. Percentage reductions relate to the designated base-line year for the substance. The Protocol does not forbid the use of existing or recycled controlled substances beyond the phase-out dates.

There are a few exceptions for essential uses where no acceptable substitutes have been found, for example, in metered dose inhalers (MDI) commonly used to treat asthma and other respiratory problems or halon fire-suppression systems used in submarines and aircraft.

In 1994, the United Nations General Assembly proclaimed 16 September the International Day for the Preservation of the Ozone Layer, commemorating the date of the signing, in 1987, of the Montreal Protocol on Substances that Deplete the Ozone Layer (resolution 49/114).

Implementation of the Montreal Protocol progressed well in developed and developing countries. All phase-out schedules were adhered to in most cases, some even ahead of schedule. Attention focused initially on chemicals with higher ozone-depletion potentials including CFCs and halons. The phase-out schedule for HCFCs was more relaxed due to their lower ozone-depletion potentials and because they have also been used as transitional substitutes for CFCs.

On 16th September 2009, the Vienna Convention and the Montreal Protocol became the first treaties in the history of the United Nations to achieve universal ratification.

The Parties to the Montreal Protocol on Substances that Deplete the Ozone Layer reached agreement at their 28th Meeting of the Parties on 15 October 2016 in Kigali, Rwanda to phase-down hydrofluorocarbons (HFCs).