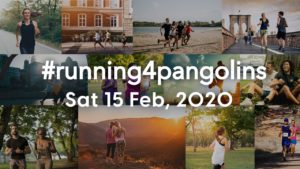 Conservation non-profit organisation Pangolin.Africa has launched a World Pangolin Day campaign to involve ordinary citizens around the globe in what is expected to be the biggest one-day awareness event for the African pangolin ever.

The #running4pangolins campaign aims to generate mass global awareness on Saturday 15 February by inspiring everyone from armchair athletes to competitive runners to hit the tar, track, trail or treadmill in support of pangolin conservation.

No fixed route or distance has been designated, so as to make participation in #running4pangolins accessible to anyone, anywhere. Runners will receive a campaign race bib on signing up, which will visibly identify them as supporters of the pangolin awareness initiative, and participants may then choose to complete a weekly parkrun, to do a social run with friends or just run solo.

While the organisers hope that participants may choose to raise money through sponsorship from friends and family to help fund Pangolin.Africa’s conservation projects, they stress that it this not a prerequisite for taking part in the event.

Says director of Pangolin.Africa Toby Jermyn, “Participating in the campaign is easy, fun and free. Whether you run marathons, fun runs or just run for the bus, here’s the chance to do something really amazing for the most trafficked wildlife species on earth and show your support for the future of this extraordinary animal, by simply becoming a ‘running billboard’ on the day.”