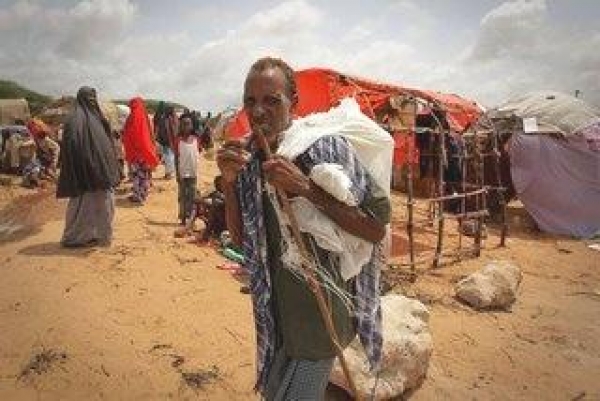 Realist Foreign Policy refers to the policy of a sovereign state in its interaction with other sovereign states. It might seem strange that an article that opens with a line like this finds itself in an environmental publication. Yet, it is not strange at all, as environmental issues like climate change don’t ‘respect’ state boundaries.

There is an environmental side to Foreign Policy and diplomacy and the only actors on the international stage that have the power to influence policy decisions are no longer only states. Various NGOs and intergovernmental organizations now voice their opinions and continually challenge old policies on climate change.

What is the link between politics and the environment in the horn of Africa?

‘Somalia is facing its worst food security crisis in the last 20 years,’ says Mark Bowden, the UN’s top official in charge of aid to Somalia.

As a result more than 80 000 people have died of starvation so far, according to Prof Abdi Samatar, a Somali-born associate professor at the University of Minnesota. He has done intensive research on the geo-politics of the area and recently presented a seminar on the topic at the University of Pretoria.

Christian Parenti, author of Tropic of Chaos: Climate Change and the New Geography of Violence, says ‘the famine in Somalia is a tragic human catastrophe. But is the drought that is driving the famine really a natural disaster or has it been in large part produced by bad policy?’

Scientists believe this drought fits the pattern of climate change increased drought, punctuated by extreme flooding, that we will see spread across the world if emissions are not cut. But the famine is also the product of bad economic and military policies in the recent past, all of which helped cause state failure in Somalia and continue to cause famine to spread in other countries. But what is the direct link between climate change and policy? Is climate change truly to blame for the famine? Or could it simply be blamed on governments’ failure to act?

It is commonly believed that when something goes wrong within a state, despite the involvement of non-state actors like multinational corporations or rebel insurgency groups, it is the government’s responsibility to fix it or to make it better. But Somalia’s government is too weak to enforce strict policy.

One of the most complicated reasons why aid has not reached all the parts of Somalia is because of an Al-Qaeda linked terrorist group called Al-Shabab. The World Food Programme (WFP) was the first to deliver aid via airlift, but the Al-Shabab, which controls much of central and southern Somalia, has banned the WFP from its areas.

The weak interim government – backed by the 9000-strong African Union force – controls about 60% of the capital, Mogadishu, including the airport, the port, the presidential palace and areas around the city’s largest market, according to BBC News. When more than one group wants to be in charge chaos usually erupts. A servant cannot serve two masters. This makes it practically impossible to formulate any kind of policy that would create enough order to bring about stability, and eventually prosperity, in Somalia.

We have to build bridges

How does this link to the seventeenth Conference of the Parties (COP17) that will be hosted as part of the United Nations Framework Convention on Climate Change (UNFCCC) in Durban this year? Policy. Policy is still the only way to enforce a binding agreement and a binding agreement is the only way to force states to cooperate towards a goal that might not directly, or at all, benefit them.

Lesley Masters, a Senior Researcher for the Institute for Global Dialogue in the foreign policy and international diplomacy programme, says that negotiations at COP17 will ‘seek to shape the future of the climate change regime, drawing Africa and other vulnerable states into the centre of the discussions will be paramount. And in bringing divergent positions together at COP17, South Africa will need to adopt the role of a bridge builder.’

Bridge building is a political act that has many facets. It is the link between politics and economics that makes climate change relevant to political discussions. It influences the means of production that in turn determines which markets commodities are sold on. In the end it’s about resources and money. That is why after long periods of discussion, often no agreement is reached between states. No state is willing to – as a government might see it – inhibit its production at the cost of its own population, if other states are unwilling to do the same. This is one of the main reasons the Copenhagen Climate Conference in 2009 failed. States hide behind sovereignty. And so no climate change or carbon emission policy is formulated and we carry on with business ‘as usual.’

To flee or die

Except, it’s not business as usual for the people in Somalia, who have to flee their homes not to starve. Their situation is the very basic visualization of the economics mentioned in the previous paragraph. Donors are sending aid to the famine stricken regions of Somalia, but will this really solve the problem?

Nancy Kachingwe from Action Aid writes (about COP17 negotiations, although the same applies to the crises in Somalia) that ‘there is always the potential that with large amounts of money being thrown at the process by donors, our interventions create chaos and conflicts. It is important for International Governmental Organizations to spend time coordinating their work.’

Imbewu Sustainability Legal Specialists director, Andrew Gilder, makes a valid point when he says that ‘it seems to me that we are expecting way too much from an environmental international convention like the UNFCCC. To address climate change in a comprehensive and significant manner, we need to radically change our economic models and ensure a transition to a low-carbon economy.’

In addition to this, our political models need to change also. We need to be stricter about other, more political factors that are adding to environmental damage.

A good place to start is perhaps to utilize the aid to Somalia to help a credible government onto its feet, so it can implement proper policy and so protect its people and the environment simultaneously.