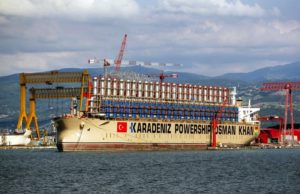 On 16 August 2021, the Green Connection submitted its response to the appeal – by Karpowership SA, and others – against the decision by the Department of Forestry, Fisheries, and the Environment (DFFE) to refuse environmental authorisations for the floating power plants (FPPs).

Small-scale fishers from the West Coast and other stakeholders are also sending responses to Environment Minister Barbara Creecy commending the DFFE, urging her to uphold her department’s refusal decision because of the several serious flaws in the Environmental Impact Assessment (EIA). The deadline for comments is this Thursday 19 August.

Upon analysing the EIA report with its legal team, the Green Connection felt that it was flawed.

There was no underwater noise study, and it was therefore not possible to understand the impact that the power ships, running for 20 years, would have on the marine environment and on the fish that small-scale fishers depend on. The Green Connection made its submissions to the DFFE and welcomed the Minister’s refusal to grant Karpowership SA an EIA authorisation.

In their appeal against the DFFE refusal, the Environmental Assessment Practitioner (EAP) and Karpowership SA subsequently provided noise levels for their ships operating in Ghana. Based on this information, it was concluded that the power ships have a low impact on marine ecology thus ‘proving’ that Karpowership SA’s operations will not have a negative impact on the marine life in South African ports.

Not a sound basis for decision making

The Green Connection’s Community Outreach Coordinator Neville van Rooy says, “These noise studies have been critically analysed by an expert and found not to be credible nor independent and not a sound basis for decision making. The initial recommendations of the Marine Ecology Specialist study and Specialist Study on Noise Impacts, presented for public comment on the Draft EIA report, was not based on modelling of sound that would be produced by Karpowership SA’s vessels in the South African ports where they are intended to be located. Additional evidence on underwater noise was introduced for the first time in the final report EIA report, at which point the public was not afforded the right to comment, and as such was deprived of the right to controvert such evidence. The Green Connection has now submitted its comments (a 320-page document) on Karpowership SA’s appeal.”

“In our view, Karpower failed to undertake a meaningful underwater noise impact study, which is critical to understanding the cumulative impacts on the Saldanha marine environments, which is not Ghana in the first place. Since small-scale fishers in the area depend on fish (including juvenile fish) for their livelihoods, it is particularly important for them to understand these impacts and make their inputs to the decision-making process,” says Van Rooy.

“We are extremely concerned that the power ship project could undermine other important local economic sectors, such as small-scale fishing and aquaculture are important contributors to the local economy. The Green Connection also believes that there are several renewable energy options that could fill the short-term electricity generation gap – with less greenhouse gas emissions than the power ships, more local opportunities, and which do not harm the fragile marine environment,” says Van Rooy.

He says, “As we understand it, Karpowership SA has said that the reason they cannot measure the impacts of underwater noise and vibrations, resulting from the operation of the gas turbines on the power ships, is because there are no power ships in the bay. Yet, affected fishing communities need to know if the noise will chase their fish away. Our ocean is too precious and our small-scale fishers too valuable for us to be satisfied with this ‘wait-and-see-what-happens’ approach. If Karpowership SA want to operate in SA’s ports, it is their responsibility to conduct all the required studies and modelling to predict the impacts on the marine ecology of underwater noise, as well as other impacts such as sea water warming and air pollution (including climate change impacts).”

“It only makes practical sense, before these floating power stations dock in our bays, that we have this data to assess the risks. If these kinds of requirements can be bypassed, then what exactly is the point of doing an EIA – which is meant to predict and assess the potential environmental impacts of projects proposed? It is important to understand what behavioural shifts are to be expected in the marine ecosystem. Will these be temporary or permanent? How will these shifts impact on the health of marine life, small scale fishers, and existing and future aquaculture in Saldanha Bay?” adds Van Rooy.

The Green Connection believes that the controversial power ships are not needed and is hopeful that the Minister of DFFE will uphold her department’s refusal to authorise these floating power stations.

According to its appeal, Karpowership SA claims that “the EIA clearly lists the location where the floating power plants (FPP) will be moored into. The ship will be moored into Big Bay area in the port of Saldanha. The Big Bay area is not a fishing zone and never was. We can safely assume that the operations of Karpowership SA will not threaten the livelihoods of small-scale fishermen because they are not operating in a fishing zone.”

This is disputed by small-scale fishers. According to Natalie-Jane van Wyk of Coastal Links Saldanha Bay Community, “Subsistence fishers in the West Coast have been fishing here for decades. For generations, our livelihoods have come from the ocean. This is where our skills and expertise lie. We are familiar with the marine species that live and breed here in Pepper Bay (known to most as Big Bay and Small Bay) and are not willing to risk these for a bit of electricity that could be generated in a number of other, more sustainable ways that do not threaten fisher jobs. Sadly, even with our knowledge, small-scale fishers are always excluded from decisions regarding the ocean.”

“We believe that Karpowership SA has not done the necessary research to assess and evaluate the effects of the equipment and operations on the environment and marine life. If our livelihoods are sacrificed for a little electricity to give a boost to other sectors, who will help us put food on our tables or send our children to school, or even college or university? Do others matter more than us? Even though South Africa is in a desperate energy situation, powerships are not the answer. There are other ways this problem can be dealt with, in a cleaner manner and with consideration for the livelihoods of so many small-scale fishers, who already face poverty,” adds Van Wyk.

Chairperson of Saldanha Bay Coastal Links, Carmelita Mostert says, “We were happy that the DFFE has denied Karpowership SA from parking their ships in our harbours, since it could have an extremely negative impact on our fish species, making them move away to quieter places. The consequence for us, if this happens, is that we will literally not be able to survive. We will not be able to feed our families or raise our children. This is a very scary reality for us small-scale fishers and should not be allowed.”

Solene Smith of Coastal Links, Langebaan adds, “I really am disheartened by business’ appeal of the government’s decision, because the bottom line for us, as subsistence fishers, is that when you put a noise generating ship in the ocean, it scares away the fish. What will that mean for us, since our livelihoods and our survival depend on the fish? Our people have been fishing on this coastline for generations. We have an ancestral right to fish in these waters and we will do everything we can to protect that right.”

Barend Fredericks, a small-scale fisher from the Bigai Knysna Community, also welcomes government’s decision. He says, “These ships are intended to be anchored in our ports for 20 years. That is 20 years of noise and potential environmental disasters that will not only affect our fish stocks but could threaten endangered species like the seahorse. So, we call on the government to seriously consider using renewable energy sources instead of the power ship option.”

Subsistence fisher, Sibusiso Ndidi of the Eastern Cape Environmental Network (ECEN) adds, “We support the government’s decision to deny Karpowership SA. We feel that there was not enough public participation involving the communities who would be most affected by the project, since it was done virtually. We also feel that not enough has been done to understand the impact of noise pollution on aquatic life, and that more research should have been done in this regard. We are also concerned that these power ships will likely lead to further increases in electricity prices, which consumers must pay. We remain adamant that the best solution to South Africa’s power crises is for government to fully commit to renewable energy.”

Ntsindiso Nongcavu, a small-scale fisher and Chairman of Coastal Links Port Saint Johns in Eastern Cape says, “I hope government does not backtrack on its decision. This whole process emphasizes the importance of consulting the community in decisions that affect us directly. We are asking government to take us seriously as small-scale fishers because, at the end of the day, small businesses will also help revive our economy, not only the commercial ones.”

Pumza Kalimashe, also a small-scale fisher with Coastal Links Port St John’s says, “Power ships are not the answer. The reality is that only big business will benefit from this, while small scale fishers and our communities will suffer. We would prefer that government invest in tourism in our area instead of allowing our environment and livelihoods to be threatened by these power ships.”