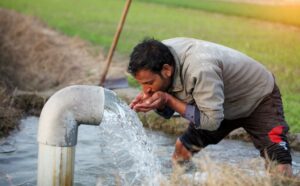 The Department of Forestry, Fisheries and Environment has released proposed regulations for onshore oil and gas exploration and production, including the use of hydraulic fracturing (“fracking”).

Responding to the proposed regulations, Jonathan Deal, CEO of Treasure Karoo Action Group (TKAG) said that “The scale and magnitude of drilling and fracking operations have proven to be beyond the grasp of established oil and gas producing countries and states, such as the United States of America, where are pollution and drilling incidents, including the contamination of water resources, have continuousy been recorded, posing a public health risk.”

“This despite the fact that oversight bodies, such as the Environmental Protection Agency (EPA) in the United States, are equipped with 15,000 trained and organised staff and an annual budget of $10 billion, when compared to South Africa’s environmental department and inspectorate. It is well known that the regulation on mines in SA is an absolute failure and that the local community always carries the cost of pollution, while those few connected individuals who champion the industry walk away with great riches.”

“The government’s interest in shale gas is motivated by a facile assumption around promises of jobs, a so-called abundance of energy and financial gain. These ridiculously inflated figures have fallen like dominies in the past decade as the claims have been disproven by unparalleled local research, such as the Strategic Environmental Assessment and the Academy of Science of South Africa’s report on SA’s technical readiness for supporting a shale gas industry. Nevertheless, the government appears to be determined to forge ahead despite scientific data to the contrary.”

Deal stated that TKAG and Afriforum are in the process of preparing a robust joint response and have urged South Africans to submit their comments on the proposed regulations before 28 August. After ten years, this fight will go down to the wire and it is up to the local communities to stand together against this great risk – just the same as they did in the E-toll saga. This government has proven itself incapable of managing even day-to-day services, let alone a complicated and dangerous technology steered by profiteers.

“The long-impacts of thousands of abandoned well points with potential future casing failures and groundwater contamination, across such an expansive geographic area, is a ticking time bomb that would dwarf the acid mine drainage issue in South Africa. Moreover, the gas will not be cheaper than buying from sources such as Angola and Mozambique – it will cost more, risk water and agriculture and the local community will sit with the mess whilst the ministers who facilitated this will escape liability,” Deal concluded.