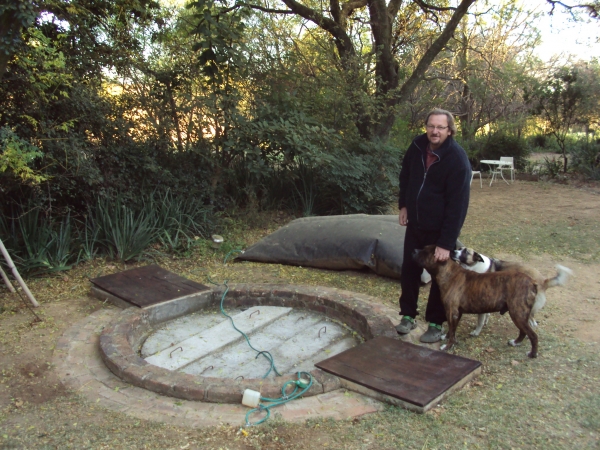 In the pursuit of a greener, healthier lifestyle we are constantly on the lookout for new ways to turn our wasteful lives into a more logical nature-simulating exercise, as Nature is always our best teacher. In nature there is no waste – everything is re-used to benefit some other organism, often as food.

Of all the eco devices that we can now implement to lead lives that make more sense in terms of the future of this planet – there is one that stands out for me as one of the kings. And not having one is simply stupid, as are many of the aspects of our wasteful lives. Like flushing the toilet with drinking water here in Africa.

Today we’re talking about the biodigester. The what? Amazing how few people know what this is – it’s one of my favourite discoveries in my 20 odd years of eco writing.

Natural methane to cook your food

I am talking about a container in your garden into which your sewage flows, where it decomposes and traps the resultant methane gas. This methane is then piped to your kitchen for cooking purposes, for lights, or heating. Voila! You never need to buy gas again. You manufacture your own from your family’s natural waste products, which we normally pump to overstretched sewage farms.

Though the thought of re-using one’s own effluent might be frowned upon by most, this resistance is just one of many which we will need to let go of in our endeavor to live more ecologically. Plus now we have energy for an entire family’s cooking and heating needs. 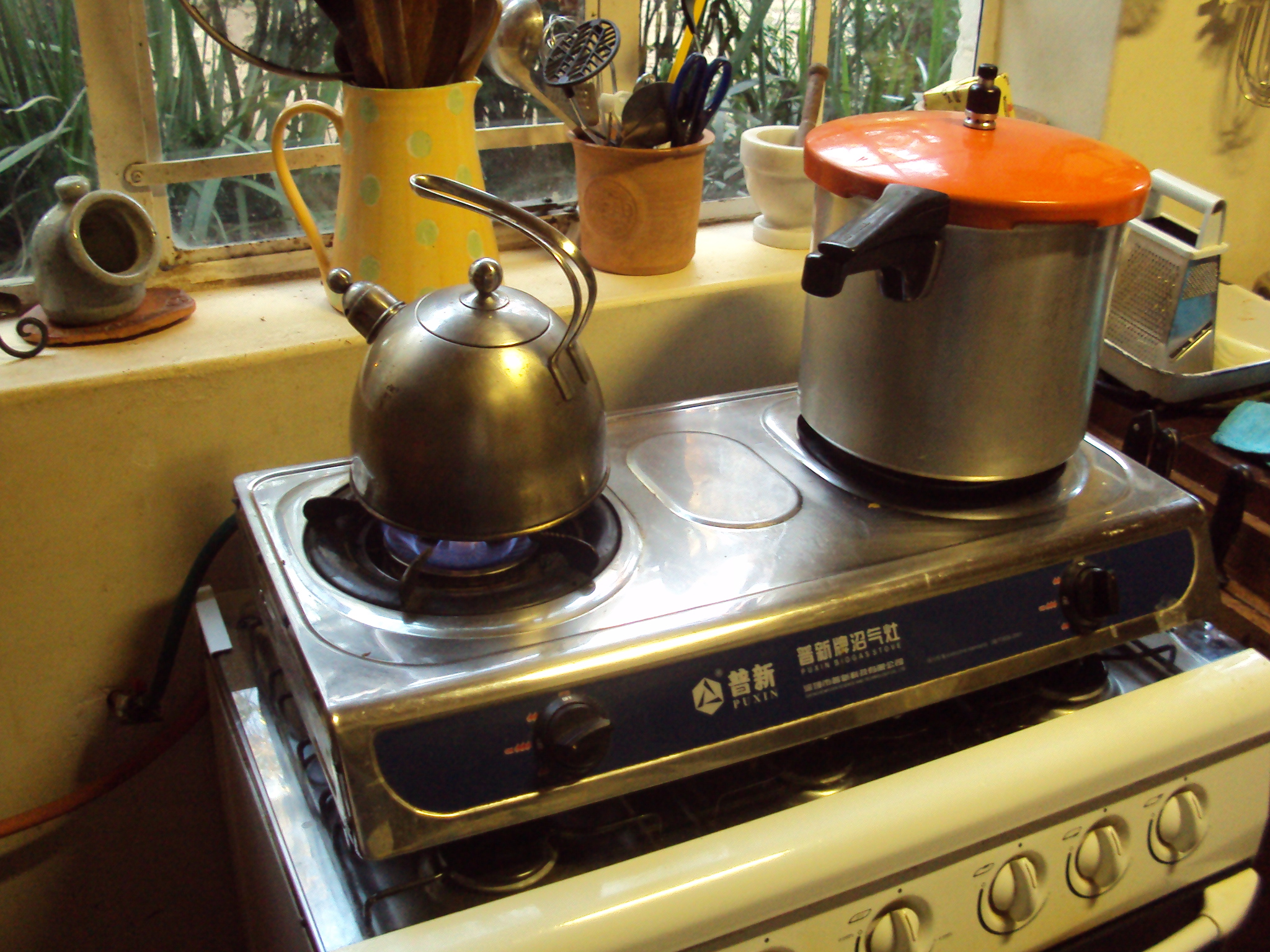 Human effluent, cow dung and garden refuse are no longer seen as waste by the local biodigesters service providers, but as a very natural resource and easily accessible alternative energy source.

Waste to energy in your own back yard

But how does it all work? The concept is quite simple. The biodigester is a natural waste management system that uses organic agriculture and human waste to produce biogas (fuel) and boil (natural fertilizer) by means of anaerobic digestion.

The biodigester could be made of flexible plastic and semi-buried in an open trench in the ground. Or you dig a big hole in the ground, line it with concrete – or you pop in a pre-manufactured tank created for this purpose.

While the methane released by the break-down of the organics is captured in a controlled manner, the heat generated from the production converts the waste into a nutritionally rich fertilizer. 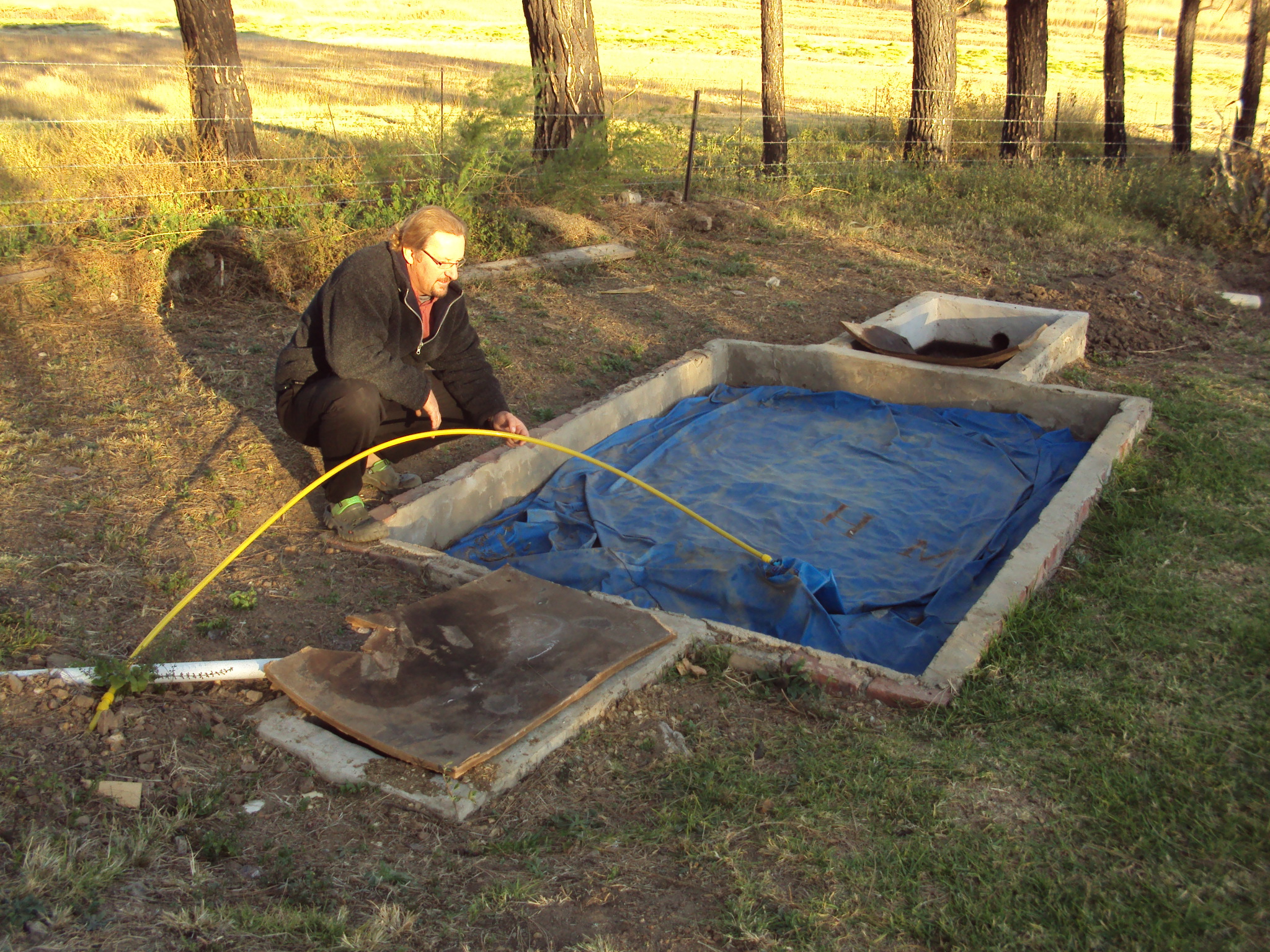 The end product? A safe substitute for propane and other gasses which can be used for heating, cooking and lighting – producing around 700 liters of gas per day, enough to cook for about three hours.

There are various models on the market. In the one the biogas is stored in a reservoir made of plastic, which acts as a cylinder. These reservoirs have to be placed near the kitchen and in a protected area under a roof. The reservoirs keep the biogas under pressure. Without reservoirs, the biogas would only last about 20 to 30 minutes.

Every time a biodigester is loaded with fresh manure and water via the inlet pipe, 80 litres of biol (natural fertilizer) comes out at the other end (outlet pipe).

It not only comes with huge ecological benefits, such as reduction of deforestation due to the collection of firewood for cooking and saving carbon in not using electricity, but could also reduce the country’s sewage and electricity trouble.

Very often the sewage emanating from our country’s informal settlement areas are not being treated properly (toilets and sewer systems are either incomplete or overloaded) so the impoverished communities bear the brunt. This also leads to diseases and other ill effects, ending up in our groundwater and rivers. (See our water section for more stories).

According to the National Committee on Climate Changes, if radical improvements are not made South Africa’s freshwater resources are expected to be fully depleted and unable to meet the needs of the people and industry by 2030. One of the big threats is sewage. Then there’s our electricity supply crises due to our dependence on dirty coal.

Apart from saving money in terms of gas, paraffin or electricity, it also has an impact on the greenhouse effect and climate change emissions by capturing methane gas, which prevents it from being released into the atmosphere. The detrimental impact of methane is 23 times greater than carbon dioxide. 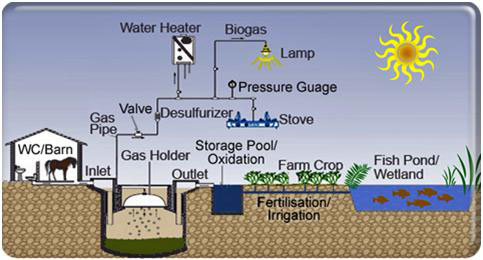 I was lucky to spend time with one of the biodigester pioneers in the country, Mark Tiepert from Biogas SA. When he moved into a smallholding near Hartebeespoort, the old sewage system was dysfunctional, so he decided to replace it with the obvious solution for a practical green man like Mark. As purchasing a premade one was not cost-effective, he built his own. I saw the big hole he dug in the ground and lined with concrete. And experienced a delicious supper cooked with their own gas. See the diagram above to understand how it works.

Mark also sells a do-it-yourself kit for around R7000, which makes the whole thing affordable to eager greenies without loads of money. It’s basically a big plastic balloon which can lie anywhere out of sight in your garden inside which the digesting takes places. A small pipe travels through the garden to your kitchen.

From Mark’s site www.biogassa.co.za: Biogas is one of the most untapped sources of natural energy available. Although biogas is used all over the world (India for instance has more than 4.5 million digesters), biogas in South Africa is practically unknown. Only a very small number of digesters have successfully been built and commissioned to date here in South Africa, both on a small domestic scale, as well as larger commercial installations. As a source of alternative, sustainable energy it fulfils all the criteria relating to environmental sustainability, requires relatively low technological input and is cost effective to implement.

We browsed around for the other guys in this business and found the following: