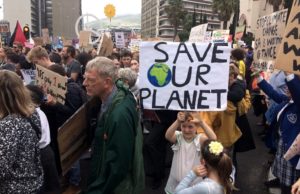 It was time. Human limits had been reached and overstepped. How long did the children have to bear the conflict between what they know and how the world is run? For how long do we expect them to trust that somehow some miracle will save them? We have raised them to ask questions – they are informed. They can no longer be placated.

It was a bittersweet experience to march with the embattled youth to Parliament in Cape Town during the Climate Strike – the biggest ever world-wide gathering on this planet. I was moved by the distress, the outrage and indeed the determination of the generation inheriting the mess.

As a mother my natural inclination was always to want to protect the children from the information that those in charge should be sorting out. To try to reach those in decision making positions to govern intelligently and boldly. My generation. Yet we have to admit that didn’t help much… somehow most discussions still remain just talking. What are we doing to our children? 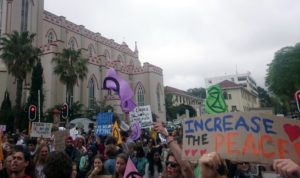 “Action is an antidote to despair,” is what we activists believe. And indeed it helps to do something, rather than sit and complain, but change nothing.

I also felt a sense of relief and hope that finally common sense can perhaps return to this planet. The guts to face what is wrong and make it right – no matter which comforts you need to purge. Undeterred by the narcissistic inability to register your own mistakes. At least the youngsters are informed and aware. Gatvol. And not captured by the trap that paralyses those in charge – the ego, the disbelief, the guilt perhaps. 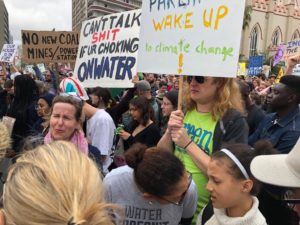 There was even a sort of apology by Archbishop Thabo Makgoba who said this matter was left too long. That early warnings were ignored. That we failed to look after the earth entrusted to us by God. With most churches now on-board with the climate cause in a unified call for stewardship there is indeed a gathering of the forces. Anyone with any moral sense has to be moved by this our self-created existential threat.

I do believe now that the baton is in good hands. Let us throw our full weight behind the innocent and vulnerable, the brave and the bold and MOVE our politicians towards total transformation. 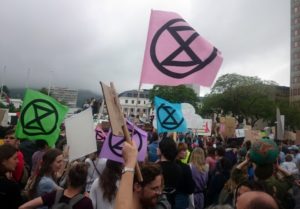