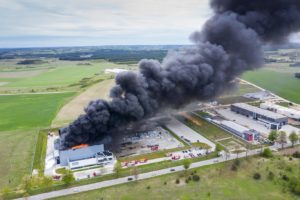 Greenpeace Africa volunteers have launched a petition demanding accountability from United Phosphorus Limited following the July explosion of their chemical warehouse in Cornubia in Durban.

An investigation by amaBhungane has uncovered that the warehouse stored hundreds of chemicals with known adverse health effects, including Masta 900, methamidophos, and paraquat. It also stored chemicals with active ingredients known to cause permanent damage to DNA, according to the investigation. The fires caused many of the toxic chemicals to disperse into surrounding communities, with many people reporting symptoms as a result of exposure.

Desiree Laverne, Greenpeace Africa Volunteer, has said, “It is truly horrifying that United Phosphorus Limited has been so secretive when they have caused such suffering. After the fires, many people reported the stench of chemicals in the air. I felt like my chest was going to explode. There was nothing we could do to avoid breathing the chemicals in and suffering the effects. We even shut all the doors and windows and wore double masks inside.”

United Phosphorus Limited have made multiple attempts to avoid disclosure of the warehouse’s contents. As revealed by the amaBhungane investigation, the warehouse did not follow any procedures to assess the safety and possible risks of storage of the chemicals. The absence of environmental permits and risk assessments shows that the company does not have community and environmental health and safety in mind.

In their own media statement, United Phosphorus Limited indicate that it was initially their own view that neither a risk assessment nor an environmental assessment were required. These views were only later confirmed by the company’s legal consultant – after the fires and resulting damage.

“The company’s history is tainted with negligence. They have a history of pollution accidents, environmental violations, illegal dumping of toxic waste, and even workers’ deaths. They have been fined for operating without valid authorisation in the past. They are just another company interested in putting profit over people, and they need to be dealt with as such,” ended Laverne.

Greenpeace Africa volunteers urge the public to sign their petition and demand that United Phosphorus Limited are held accountable. Their lack of transparency and failure to obtain environmental permits or formal risk assessments have had dire consequences for the health of surrounding communities as well as the local environment. UPL must be charged for clean ups and incur the cost of any further damages caused by their negligence.