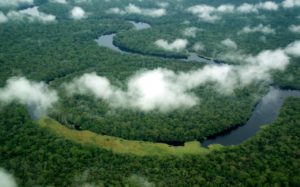 The UNESCO World Heritage Committee has decided to remove Salonga National Park in the Democratic Republic of the Congo from the List of World Heritage in Danger.

The decision follows clarification “provided by the national authorities that the oil concessions overlapping with the property are null and void and that these blocks will be excluded from future auctioning.”

Oil blocks overlapping with Salonga were awarded by President Joseph Kabila in the twilight of his regime. Greenpeace Africa has repeatedly demanded their cancellation, while local leaders voiced their opposition to the project in light of its impacts on communities.

“A decision by President Felix Tshisekedi to cancel all oil blocks in Salonga Park must be followed by a decision to cancel oil blocks in Virunga Park and across the Cuvette Centrale region. These are vast areas rich in biodiversity that provide clean water, food security and medicine to local communities and which render environmental services to humanity,” says Irene Wabiwa Betoko, International Project Leader for the Congo Basin forest.

The Salonga National Park, which is Africa’s largest tropical rainforest reserve, was inscribed on the World Heritage List in 1984. The park plays a fundamental role in climate regulation and the sequestration of carbon. The park is also home to numerous endemic endangered species such as the pygmy chimpanzee (or bonobo), the forest elephant, the African slender-snouted crocodile and the Congo peacock. Salonga had been inscribed on the List of World Heritage in Danger in 1999, due to pressures such as poaching, deforestation and poor management. The government of DRC later on issued oil drilling licences that encroached on the protected area, posing a threat to the wildlife-rich site.

“DRC’s auctioning of oil blocks has not only been scandalously lacking transparency and menacing for particularly sensitive environmental areas – they neither benefit Congolese people nor the planet. Instead of privileging a small group of beneficiaries of the toxic fossil fuels industry, diversifying the DRC’s economy should be done through renewable energy investments that will make energy accessible and affordable for all,” Irene Wabiwa concluded.

Greenpeace Africa urges full transparency from both UNESCO and the DRC government and calls for the publication of all supportive documents regarding the decision to cancel the aforementioned oil blocks, as well as the map of the nine oil blocks that are still being auctioned in the Cuvette Centrale region.

The Congo Basin Forest shelters millions of local people and protects endangered wildlife. It also actively fights climate change. But we are losing this vital forest to the hands of industrial logging and agribusiness?

In recent years, the rate of deforestation has increased at an alarming rate. The inadequate control over the forest sector and increased demands from international markets have left agribusiness and industrial logging to expand and exhaust forest resources.