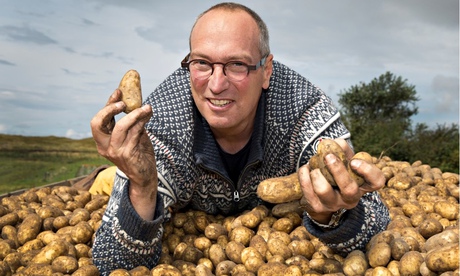 Marc van Rijsselberghe with some of his experimental crop of salt-tolerant potatoes. Image: Observer

In a small army field-hut Dr Arjen de Vos shows off his irrigation machine with pride. Pipes lead out to several acres of muddy field, where only a few stragglers from the autumn harvest of potatoes, salads, carrots and onions are left. The tubes are lined with copper to stop corrosion because – in a move that defies everything we think we know about farming – de Vos is watering his plants with diluted sea water.

Last week the project beat 560 competitors from 90 countries to win the prestigious USAid grand challenge award for its salt-tolerant potato. “It’s a game changer,” said de Vos. “We don’t see salination as a problem, we see it as an opportunity.”

Here, on one of the Netherlands’ northernmost islands, windswept Texel (pronounced Tessel) surrounded by encroaching ocean and salt marshes that seep sea water under its dykes and into ditches and canals, an enterprising farmer has taken the radical step of embracing salt water instead of fighting to keep it out. And now he thinks he might just help feed the world.

Inspired by sea cabbage, 59-year-old Marc van Rijsselberghe set up Salt Farm Texel and teamed up with the Free University in Amsterdam, which sent him de Vos to look at the possibility of growing food using non-fresh water. Their non-GM, non-laboratory-based experiments had help from an elderly Dutch farmer who has a geekish knowledge of thousands of different potato varieties.

“The world’s water is 89% salinated, 50% of agricultural land is threatened by salt water, and there are millions of people living in salt-contaminated areas. So it’s not hard to see we have a slight problem,” said van Rijsselberghe. “Up until now everyone has been concentrating on how to turn the salt water into fresh water; we are looking at what nature has already provided us with.”

The scarcity of fresh water has been labelled as the planet’s most drastic problem by the World Bank, NGOs, governments and environmentalists. A fifth of the world’s population already lives in areas of drought, and climate change is only going to exacerbate the problem. Poor farming practices, along with road and pavement building, is raising water tables and increasing the salination of rivers and lakes – in the Western Australian wheat-belt alone, salinity has caused a 50% fall in the numbers of wetland bird species, and threatened 450 plant species with extinction.

No need to desalinate sea water

Attempts to desalinate sea water are going on around the globe – the UK has a £270m plant on the river Thames and Saudi Arabia produces 70% of its drinking water through desalination. But removing the dissolved minerals is expensive, requires much energy and the leftover concentrated brine has to be disposed of. The process is far too expensive to be used for irrigation in poorer countries. But thanks to a partnership with Dutch development consultants MetaMeta, several tonnes of the Texel seed potatoes are now on their way to Pakistan where thousands of hectares of what until now had been unproductive land because of sea water encroachment have been set aside for them.

If the experiment works and the potatoes adapt to the Asian climate, it could transform the lives of not only small farmers in Pakistan and Bangladesh, where floods and sea water intrusion wipe out crops with increasing regularity, but also worldwide the 250 million people who live on salt-afflicted soil.

Bunch of lunatics with an idea

Van Rijsselberghe is happy to be seen as an entrepreneur whose interest was to grow a “value added” food crop that would tolerate Holland’s problems with water. He says he used a trial and error approach in development. “We’re not a scientific institution, we’re a bunch of lunatics with an idea that we can change things and we are interested in getting partnerships together with normal farmers, not people who want to write doctorates.” As a pioneer of organic farming in the 1990s, he faced heavy opposition, while a project to grow sea aster – a salt marsh-grown salad popular in high-end restaurants – ended in disaster when 3,000 migrating ducks made an unexpected stop and ate the entire crop in three hours. ”

He says the Netherlands needs to rethink its approach to food: “A third of the country is sensitive to salination. We put up dykes and pump away the water; we feel safe. We believe that outside the dykes is for the fishermen and inside the dikes is for the farmers. I think we have to stop that and talk to each other. What can be grown on the salt marshes and in the sea? Can we grow prawns in the lakes? We need to have these conversations and rethink the way we produce food.”

Where does all the salt go?

But where does all that salt go? Aren’t we in danger of overdosing on salt if we eat the Salt Farm Texel crops? “What we find is that, if you tease a plant with salt, it compensates with more sugar,” said de Vos. “The strawberries we grow, for example, are very sweet. So nine times out of ten the salt is retained in the leaves of the plant, so you’d have to eat many many kilos of potatoes before you’d exceed your recommended salt intake. But some of the salads are heavy with salt, you wouldn’t eat them by the bucketful.

“And there are other potentials, too – if we could find a grass that was salt tolerant, then it would make a big difference to all those golf courses built in developing countries that are using up all the locals’ fresh water. Nature has already laid out some helping hands for us. Mankind just hasn’t realised it.”