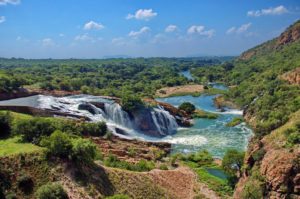 As South Africa battles the third wave of Covid-19 vaccinations and amidst the chaos, destruction and looting that has taken place in parts of South Africa in recent weeks it’s easy to forget another looming catastrophe: a water crisis with potentially devastating consequences.

In the Eastern Cape dam levels are perilously low after a multi-year drought with dams servicing Nelson Mandela Bay at record lows. The province’s main water supplier is Kouga Dam, which is currently at less than 4% capacity – of that only 1.5% is usable water. The second largest dam in the province is Impofu Dam, which is at 16.64% capacity. Severe water restrictions have been imposed in the province to delay a potential Day Zero from occurring.

While the Eastern Cape’s water shortages are primarily the result of a six-year long drought, the situation has been exacerbated by poor management of water infrastructure.

“A well maintained and sustainable water and sanitation system is essential for any functioning economy,” says Raymond Obermeyer, Managing Director at SEW-EURODRIVE.

Managing our water resources sustainably and responsibly, he adds, is even more important given the fact that South Africa – classified as the 30th driest country in the world – is a water scarce country.

“The Department of Water Affairs and Forestry estimates that South Africa will have insufficient water supplies by 2025 unless we manage our water resources more efficiently.”

South Africa’s water infrastructure is in a woeful state after decades of mismanagement and inadequate maintenance.

“The Department of Water and Sanitation is well aware of the extent of the crisis and has admitted that 56% of its 1150 treatment plants are in a poor and critical condition with 265 in a state of decay,” says Obermeyer, pointing out that Iris dashboard data confirms this revealing that 75% of wastewater treatment plants run by municipalities achieved less than 50% compliance to minimum effluent standards in 2020.

“In addition to poorly managed water infrastructure the country has also allowed many of its rivers and dams including the Vaal River and the Vaal and Hartebeespoort dams to become polluted in recent years,” he adds.

Earlier this year the South African Human Rights Commission argued that government’s continued failure to address the issue of pollution in the Vaal River and Vaal Dam has become a human rights issue and that responsible government officials should face criminal charges.

“In 2006 the South African Institute of Civil Engineering started publishing an Infrastructure Report Card, which detailed the views of its members on the condition of a range of public infrastructure, including water infrastructure assets. The inaugural report was followed by subsequent report cards in 2011 and 2017. The most recent report classified the country’s bulk water resources infrastructure and water supply for non-urban areas as at risk of failure and blamed the deterioration on insufficient maintenance and neglect, funding shortfalls and a depletion of skills at senior levels.”

Government has finally started to acknowledge the scale of the looming water crisis with the accelerated establishment of a National Water Resources Infrastructure Agency and the prioritisation of 11 water and sanitation related infrastructure projects valued at R106 billion. Four of these projects, valued at approximately R68 billion, are ready for investment with construction expected to commence in the next two years.

For several years there have been calls for the establishment of a National Water Regulator, based on the theory that the Department of Water and Sanitation cannot be both a player and a referee in this space. Obermeyer explains that a regulator would ensure that regulatory oversight is separated from water resource management and water services provision.

“Encouragingly, it appears that we are moving closer to the establishment of a water regulator with both National Treasury approving the idea and the Presidential Infrastructure Coordinating Commission Council formally proposing its establishment.”

Obermeyer questions why it has taken so long for government to start acting more proactively.

“The reality is that South Africa’s water challenges are not going to be solved overnight. It takes many years to build water infrastructure and is expensive to fund. Given the constrained state of government’s finance there is the very real risk that funding challenges will delay these projects. As a result it may very well be public-private partnerships that will fund, implement and manage these water projects.”

“In a water constrained country such as South Africa, water must be treated as the very precious resource it is. We cannot afford waste through water leaks, for example.”

“We need measurable action when it comes to managing water. A key element of this is to better manage our scarce water resources sustainably with infrastructure that is fit for purpose. Should we fail, the Eastern Cape will not be the only province contemplating a day in the not too distant future when the taps run dry.”