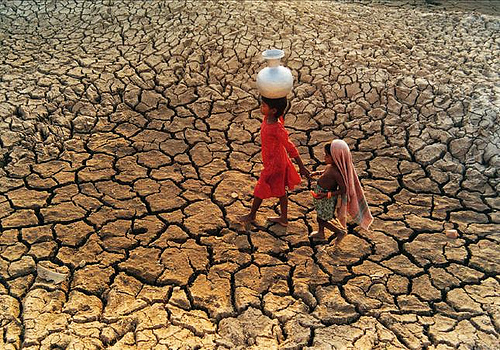 Climate regions in Africa are undergoing change due to global warming. Droughts are becoming more widespread, and more and more areas are now threatened by deforestation. Image: English Online

WWF South Africa is concerned by the vague and defensive position taken by the SA government in its latest climate change statement of intent (its Intended Nationally Determined Contribution – INDC to the 21st United Nations climate change negotiations conference). There is much room for improvement, and there is still time to do this before the INDC goes to the UNFCCC.

Allowing for South Africa’s needs as a developing country with deep poverty, South Africa initially set itself high targets for cutting its greenhouse gas emissions, and has shown the way in international climate change negotiations. This is subject to receiving international funding, technological and capacity-building support – our economy doesn’t have deep-enough pockets ourselves to pull it off.

From 17 to 23 billion tonnes of greenhouse gasses and more

“Since South Africa first tabled our targets in 2010, there has been a steady erosion of the quantity we are aiming to cut. Measurements and calculations at the time mean we would have restricted ourselves to emitting only 17.8 billion tonnes of greenhouse gases over the period 2010-2050. This has inflated to a broader emissions peak-plateau-decline range with 23 billion tonnes as the upper limit in national policy, and even that is being contested domestically,” says Louise Naudé of WWF South Africa.

“With extra international support, South Africa’s fair share of the global carbon budget to keep average temperature increases below 2 degrees Celsius would be at most 14 Gt CO2e over 2016-2050.”

South Africa’s INDC should commit to quantified overall limits to our emissions to 2050. Instead it uses varied methodologies, start dates and numbers to package the peak-plateau-decline range as a reasonable middle ground for its fair share.

Ms Naudé comments, “Having already overshot our path to ‘peak’ emissions, we need to come down faster and more sharply, not keep giving ourselves more slack. For example, the INDC should fix the business-as-usual baseline and not let it be conveniently recalculated, allowing big emitters and other special interest groups to avoid their obligations.”

The organisation urges our government to stand firm against special interest lobbying and act in the greater developmental interest. This means setting a quantified limit to our emissions to 2050, and clarifying how much of our emissions reductions we will do on our own and what further reductions need international support.

We call for the contradictions between our international position in climate negotiations and domestic action to be eliminated, and for all infrastructure and programmes to incorporate climate proofing of our economy.

“It is understandable that South Africa wants to leave itself a lot of negotiating flexibility in an international context where developed economies, among others Australia, Canada and Japan, are not doing their part. But to maintain South Africa’s standing as a global leader in the climate change negotiations, and as co-chair of the G77+China, it needs to table a stronger INDC given its position as an emerging economy which is among the world’s top 20 emitters,” says Tasneem Essop, WWF’s international Head of Delegation to the UNFCCC.

Other developing countries are doing more

“Other developing and least-developed countries who can ill afford it are doing more. It is time for Africa’s powerhouse to do the same.”