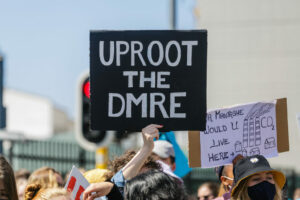 Solutions to South Africa’s crippling energy and climate crisis exist. Yet they are being blocked by the Department of Mineral Resources and Energy (DMRE) under the leadership of Minister Gwede Mantashe.

Mantashe’s DMRE is holding back a rapid and just transition to renewable energy – the fastest, most affordable way to solve load shedding. Instead, they are working to lock South Africa into an expensive, polluting and outdated energy future. They’re also ignoring the voices of mining-affected communities and allowing polluting corporations to put profit above people.

That’s why the Climate Justice Coalition is calling on President Cyril Ramaphosa to replace Mantashe and work to transform the DMRE.

The DMRE is in charge of our energy policy, and responsible for causing our devastating load shedding and energy crises. Under Mantashe they wasted vital years on a failed, four times delayed emergency power procurement programme, seemingly so they can force through the corruption-scandal ridden +R200 billion powership programme.President Ramaphosa’s own Presidential Economic Advisory council warned that Mantashe’s disastrous emergency power procurement programme appeared “to be specially written for more expensive powerships and gas-to-power projects” and “to exclude competition from renewables projects,” which would be cheaper and cleaner, while also creating more jobs.

Renewable energy would also be the fastest way to bring new energy online and address the energy supply shortage that drives load-shedding. Yet the DMRE has spent years and years preventing new renewable energy from coming online, with over half a decade wasted during a vital time to address both the load shedding and climate crises.

Looking forward, the DMRE’s outdated and flawed 2019 Integrated Resources Plan (IRP) is not bringing on new energy fast enough to address our growing energy supply gap. In the face of an energy supply shortage, the IRP constrains new renewable energy, even though doing so means load shedding may continue and deepen well into the future.

Even though the DMRE is mandated to update the IRP every two years, they refuse to do so, seemingly so they can try to lock us into unnecessary, expensive and polluting new coal and gas projects. It also constrains renewable energy 10 times slower than needed to meet South Africa’s (arguably insufficient) climate goals, even according to the oil and gas friendly National Business Initiative.

The devastating floods in KZN have made clear yet again that we are in a climate emergency.

The floods followed shortly after the world’s leading scientists delivered yet another major report warning that we are fast running out of time to avert the world careening into catastrophe. In response to the report, UN Secretary General Antonio Guterres said that investing in new polluting coal, oil and gas infrastructure is “moral and economic madness.”

Three years ago, President Ramaphosa told the UN Secretary General that he shared his “sense of urgency” when it comes to addressing the climate emergency. More recently, he also told the people of South Africa that we must undertake “an ambitious and just transition” to tackle climate change, for the risks of not doing so are far too great.

The science is clear though that the world must rapidly move away from coal, oil and gas to avert climate catastrophe. In this context, the actions of Mantashe’s DMRE to trap South Africa into polluting and expensive coal, oil and gas infrastructure are “moral and economic madness.” It is also in defiance of what the people of SA have long been demanding.

Last year, thousands of people representing dozens of civil society organisations marched to DMRE offices in every province across the country, under the banner #UprootTheDMRE. Together they delivered a list of demands, included below, aimed at transforming the DMRE and ensuring an ambitious and just transition.

The response from the Minister and his department has been appalling. The Department itself has failed to respond. Minister Mantashe has threatened civil society leaders with lawsuits and spread wild and false claims that civil society and the media are funded by foreign money funnelled through an unnamed research centre at the University of Cape Town.

This forms part of a long standing trend, where the DMRE has been hostile to the people it is supposed to serve. They ignore our people’s pleas, deny communities their right to free prior informed consent, and fail to uphold social and labour plans, putting the interests of polluting corporations above communities.

We cannot go on like this with a hostile and unaccountable department plunging us further into social, environmental and economic turmoil. A different road is possible.

South Africa faces not only a climate and energy crisis, but a crisis of unemployment, poverty and inequality. A truly transformative program to tackle the climate crisis can go a long way to tackling those interconnected crises by being the greatest economic stimulus and job creation program in the history of SA.

If we are to achieve true transformation though, we must first remove the obstacles and put in place transformative leaders. With the Director-General of the DMRE, Thabo Mokoena, stepping down, now is a vital moment to ensure that the right person is at the helm of the DMRE. Beyond replacing individuals though, the DMRE requires deep systemic and institutional change.

The DMRE must be transformed from serving the rapacious and polluting minerals energy complex, which has made South Africa one of the world’s most polluting and unequal countries. Instead it should have a new mission to drive forward a rapid and just transition to a renewable energy powered economy serving the well-being of all of SA.

Below is a summarised list of demands from the #UprootTheDMRE mobilisations:

The Climate Justice Coalition is a South African coalition of dozens of trade unions, grassroots, community-based and non-profit organisations, working on advancing a transformative climate justice agenda. Please sign their petition to the Office of the Presidency.