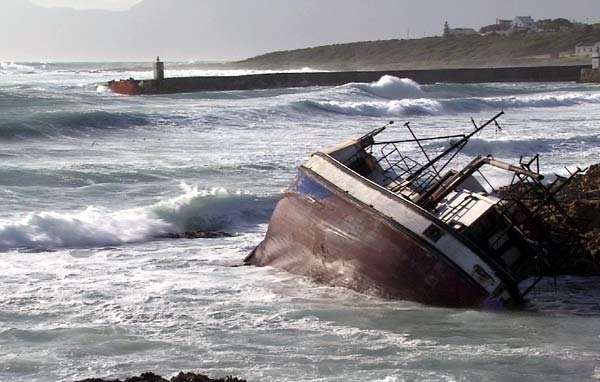 A treacherous maze of jagged rocks and tiny islands, the Cape of Good Hope has claimed some 2,700 shipwrecks in its cold, turbulent waters. Image: Jean-Michel Cousteau

On Thursday 8 August a cargo ship ran aground off the coast of Buffels Bay, Knysna. Oil is seeping into the sea and endangering the marine and coastal wildlife of the Goukamma Nature Reserve.

After a mechanical failure Chinese cargo ship, Kiana Satu, beached 50m from the shore at Buffels Bay. The 168m vessel was on course to Gabon couriering 15 000 tonnes of rice and 30 tonnes of heavy fuel. Emergency evacuation was required by helicopters for the captain and nineteen crew members. Initial inspection revealed no pollution or leaks, but by Saturday 3 tonnes of oil had spilled into the Atlantic Ocean.

This called for immediate attention and the Department of Environmental Affairs responded with a plan demanding the collaboration of the local municipality, SANparks and CapeNature, as the spill occurred in a protected area. SA Marine Safety Authority (SAMSA) is responsible for salvaging and managing the spill before it escalates to an environmental disaster.

According to SAMSA spokesperson, Nigel Campbell, the leak originated from the engine room and a crack in the hull. Actions are being implemented to curb the pollution and protect the marine and coastal wildlife.

“We are deploying teams to the beach to pick up any oil landing on the beach.” Booms have also been set up East and West of the spill to contain the oil and protect the estuary.

The Kiani Satu has stranded in the middle of a marine protected coastline. The Goukamma Nature Reserve stretches 14km along the coast and 1.8km into the ocean. The Department of Environmental Affairs’ oil spill aerial surveillance aircraft, Kuswag 9 (K9), show that very little of the oil, approximately 1%, made it to the beach and the rest remains in the ocean.

SAMSA hopes to have the wreck cleared by Tuesday, before the cold front sets in. It has been challenging to stop the oil leak because the ship is fairly inaccessible and underwater welding is made impossible by the rough seas. Heavy equipment and the cargo load have had to be airlifted by helicopter.

“We are doing our best to limit further damage and are preparing a flotation operation on Monday to take the vessel back to sea,” says Campbell.

The salvage team is drilling into the damaged tank to pump the oil in order to be transferred into another tank. SAMSA are also hoping to float the ship further out to sea by Monday because the vessel cannot withstand the battering of 7m waves from the predicted cold front. However, Campbell says this is problematic as the equipment is delicate and need to be “carefully removed” by helicopter.

CapeNature spokesperson Marietjie Engelbrecht says it is very important to contain damage to the Goukamma Marine Protected Area of 2500ha, which is vital for conservation of marine resources.

“This region is also a natural feeding area for fish species that migrate past,” she states. Pierre De Villiers, also from CapeNature, says they are doing what they can to prepare themselves if birds covered in oil emerge from the ocean and at the moment there is no “positive identification” for change.

According to CapeNature, the situation is being carefully monitored by SAMSA and DEA National. Precaution for the sensitive protected areas is in place and the SAMSA team is worked fervently to diffuse the potential disaster.