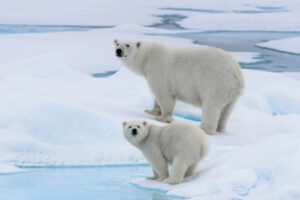 A polar bear and her cub. Image: Shutterstock

The Center For Biological Diversity has filed a formal notice of intent to sue the U.S. Department of the Interior and Bureau of Land Management for failing to protect imperilled polar bears from an oil exploration project in the Western Arctic.

“Every new oil well in the Arctic is another step toward the polar bear’s extinction,” said Kristen Monsell, a senior attorney at the Center For Biological Diversity.

“Biden should be phasing out oil and gas activity in the Arctic, not flouting key environmental laws to let oil companies search and drill for more oil in this beautiful, increasingly fragile ecosystem.”

The project — 88 Energy’s Peregrine Exploration Program — is a 5-year, nearly year-round oil and gas exploration program. It’s located in a portion of the National Petroleum Reserve-Alaska along the Colville River that’s currently free from oil and gas development. The Trump administration approved the project just before leaving office, but the company needs the Biden administration’s approval to drill any new wells.

The project involves building snow and ice roads and air strips, near constant air and vehicle traffic, and other drilling-related activity. Noise pollution from these activities can stop polar bears from feeding, disrupt their movements or scare mothers and cubs from their dens. The project will also increase the greenhouse gas emissions driving the species toward extinction.

The letter notes that the Endangered Species Act requires Interior to carefully analyse and mitigate these risks before allowing additional activity to proceed. It also argues that Interior is liable under the Endangered Species Act for any disturbance, harm or other impacts to polar bears that result from the project because the oil company has said it will not seek federal permission to disturb or harm polar bears.

With only about 900 bears remaining, the Southern Beaufort Sea population is the most imperilled polar bear population in the world. Scientists have determined that the population cannot sustain any injuries or deaths from oil and gas activities.

Recent studies project that polar bears in Alaska will go extinct within this century — and as early as mid-century — unless there are immediate, aggressive reductions in greenhouse gas pollution.

“Letting the oil industry ramp up drilling is also fundamentally inconsistent with addressing the climate crisis. Arctic drilling has got to go.”

The 60-day notice of intent to sue is required before the Center can file a lawsuit to compel the agencies to comply with the Endangered Species Act. The letter notes that the best way to remedy the agency’s violations is to suspend all activities under the exploration program and deny the company’s pending application to drill.