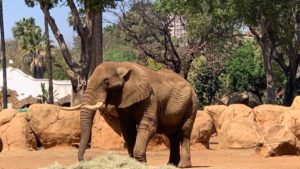 Charlie is a African bull elephant living at the National Zoological Garden of South Africa also known as the Pretoria zoo.

We have learnt much since zoos became fashionable forms of entertainment in late 1899 when this zoo was founded.

Zoos, like circuses, are becoming redundant all over the world.

Zoos are incapable of being able to offer elephants the space which they require in order to stay healthy.

Elephants need to walk great distances and forage for the correct diet. Too many elephants have died prematurely in zoos in South Africa and around the world.

The EMS Foundation has offered to relocate, rehabilitate and rewild Charlie in the wild.

The EMS Foundation, Ban Animal Trading and Rhinos In Africa are petitioning Department Environment, Forestry and Fisheries Minister Creecy and South African National Biodiversity Institute Chief Director Professor Joseph Sebola to allow Charlie to be moved as soon as possible before he becomes another dreadful statistic.