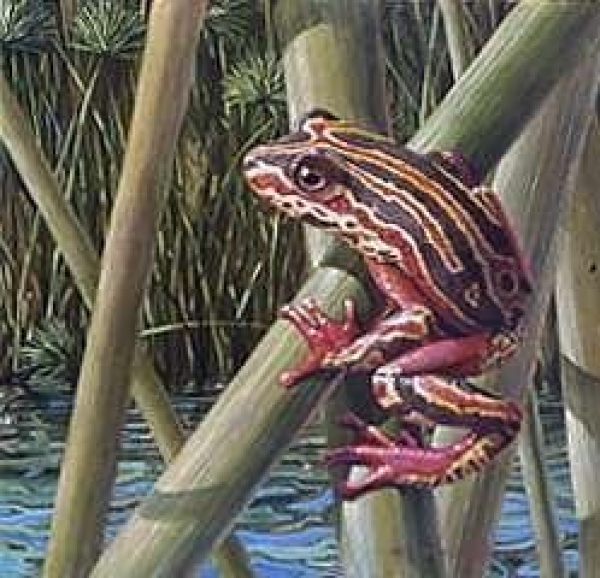 A frog researcher at Stellenbosch University (SU) is calling on nature lovers in the Western Cape to help her with research on the occurrence and distribution of the painted reed frog in the Province by reporting when they hear the call of this little frog in their region.

Ms Sarah Davies is studying the painted reed frog (Hyperolius marmoratus) for her doctoral studies in zoology at SU. She is trying to determine whether the increasing occurrence of this frog in the Western Cape may threaten species endemic to the Cape.

Painted reed frogs used to occur only in the eastern parts of South Africa, such as Limpopo, Mpumalanga, the KwaZulu-Natal coastal regions and the Eastern Cape as far as Mossel Bay.

‘In surveys for the Southern African Frog Atlas Project between 1997 and 2003, the first painted reed frogs were also, however, observed in the western parts of the Western Cape,’ Sarah says.

‘Since then, all three colour forms of this frog, each with its own body pattern, have been observed as far as the Cape.’

Hitching rides down to the Cape

Painted reed frogs live and breed near pans and dams in subtropical environments but they do sometimes find their way into houses and even into vehicles. Added to this, they are also good tree climbers! It may well be their tendency to climb into nursery plants and vehicles that has led to their increasing southward migration. Sarah speculates that increasing road transport could be another contributing factor to the frogs’ migration.

‘The occurrence of farm dams in the Western Cape also makes it attractive for these frogs to survive here – even to flourish.’

The painted reed frog does not necessarily pose a threat to the Western Cape’s endemic frog species. As any good invasion biologist will tell you, however, timely research on such a possibility is of extreme importance rather than, after the fact, at wits’ end, having to make a plan to eradicate undesirable invaders.

‘Because they do tend to congregate in large numbers, painted reed frogs could impact on certain ecosystems and could, among other things, place our indigenous arum-lily frogs under pressure,’ Sarah suggests.

At approximately 3 cm, these reed frogs are only about as long as your upper thumb joint. It therefore takes a practised eye to locate them. During mating time in the summer months, however, painted reed-frog males are very noisy and it becomes considerably easier for Sarah, with her ear finely attuned to frog sounds, to track them down in vleis and dams.

This species does not croak, as such.

‘The painted reed frog’s definitive whistle sounds almost like that of a finch,’ says Sarah – who, in addition to her part-time studies, is also research manager at the Centre for Invasion Biology at SU.

Sarah is inviting the public to help her to determine where in the Western Cape painted reed frogs have already spread to.

‘If you see or hear one, send me information on the day, time and place,’ she says. ‘A photo or sound recording to accompany this would be fantastic.’

Although GPS coordinates would be a bonus, a complete street address or farm name and the area in which the little frog was seen or heard would already be a great help.