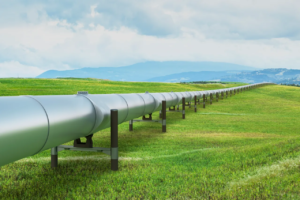 While heralded by the project proponents as a major breakthrough, the project is yet to secure all of the required financing. Now, four out of five of South Africa’s largest lenders have confirmed that they will not be involved.

FirstRand, ABSA, Nedbank and Investec have become the latest banks to publicly distance themselves from the EACOP, leaving Standard Bank as the only one of South Africa’s big five banks considering financing the project.

The project will have severe impacts on people, climate and wildlife, and has already infringed on the rights of the communities who lie in the pipeline’s 1,443km path.

A representative of FirstRand, South Africa’s second largest bank, has confirmed to BankTrack that the bank “is not participating in this project”, including under its Rand Merchant Bank and First National Bank divisions. ABSA and Nedbank, the third and fourth largest banks in the country, also confirmed that they are not involved in the project. Similarly, Investec, the Anglo-South African banking and wealth management group, confirmed that it “has no role in this transaction and as far as we are aware does not intend to be involved.” 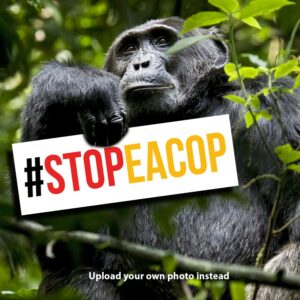 The global #StopEACOP campaign has gained significant momentum in recent months. The announcements from the four South African lenders bring the total number of commercial banks globally making public commitments not to finance the pipeline to 15 – including many of Total’s largest existing financiers. FirstRand, ABSA and Nedbank have all previously participated in finance for new fossil fuel projects led by Total in Africa, meaning their refusal to join the EACOP project is likely to add to Total’s difficulties in finding finance for the project.

South Africa’s Standard Bank, now the only South African bank still holding onto the option of financing the project, has been advising the governments of Uganda and Tanzania on the project since 2017. The bank has said that its support for the project is contingent on the results of an environmental audit, although it has not committed to make this audit public. Worryingly, CEO Sim Tshabalala said at Standard Bank’s AGM in May 2021 that a draft of that report had raised “no red flags.”

The EACOP, if completed, would pump enough oil to add up to 34.3 million tonnes of carbon dioxide – around seven times the current emissions of Uganda and Tanzania – into the earth’s atmosphere each year, at a time of acute climate crisis. Such emissions are in sharp contrast to the core message of the International Energy Agency Net Zero Roadmap published in May 2021, that if the world is to stay below the 1.5° Paris Agreement goal, there is no need for any new oil infrastructure. 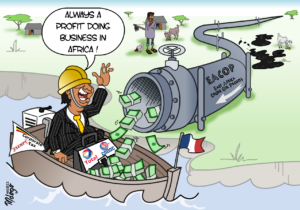 In addition, the project has been associated with a range of severe risks to communities, wildlife, forests and water resources, which BankTrack and partners have set out for financiers in a series of briefings. Recently the Ugandan government has cracked down on community and national organisations that oppose the oil developments or work peacefully to support project-affected communities, arresting human rights defenders, attempting to close down civil society organisations, with Uganda’s President Museveni even publicly insulting civil society groups at the signing of the FID.

“Despite the show of progress with last week’s Final Investment Decision, Total and CNOOC stayed quiet on the crucial question of where the money will come from. And it’s no wonder, given the huge risks posed by the project to communities, nature, water resources like Lake Victoria, the climate, and ultimately to investors. The reality is that this project is struggling to find financiers unscrupulous and reckless enough to back it.”

“It is worrisome that despite overwhelming evidence that communities’ livelihoods have been affected by the EACOP project, the consultant that Standard Bank is relying on to produce a report on which the bank will base its decision as to whether to finance the project says that no red flags had been identified by June 2021. We wonder which communities the consultant studied.” 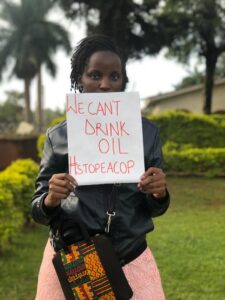 “It is clear that Uganda and Tanzania, and indeed the rest of the world, do not need banks like Standard Bank continuing to finance fossil fuels like the EACOP and associated projects. Continuing to be associated with this project would demonstrate that they are not serious about taking climate action.”

Ireen Twongirwe of the Women for a Green Economy Movement (WoGEM) says:

“Uganda’s green economic sectors such as tourism, clean energy and agriculture, the sector which employs the majority of women, have great potential. Estimates by the Ugandan government show that if invested in, these sectors can create nearly 4 million jobs. Standard Bank would do well to increase financial support to these sectors.”

“Standard Bank’s current fossil fuel financing policy does not include any ambitious financing exclusions. This year, following pressure from activists, it has committed to publish a climate strategy and short-, medium-, and long-term targets to reduce its exposure to fossil fuel assets. A credible assessment that is truly aligned with the Paris Goals, would exclude the provision of finance to this highly-destructive project.”