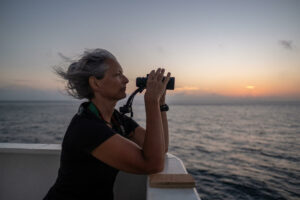 Scientists have discovered a previously unknown “impulsive sound” – dubbed the “gunshot” by researchers – that has never been recorded before. The study documented 600 whale calls over 11 days at the Vema Seamount in the Atlantic Ocean, 1,000km off the coast of South Africa.

The research was conducted during a Greenpeace International expedition to the region and led by the universities of Stellenbosch (South Africa) and Exeter (UK).

Dr Kirsten Thompson, of the University of Exeter and Greenpeace International Research Laboratories, one of the scientists who led the project, said:

“We still don’t fully understand what the ‘gunshot call’ means, and it is fantastic to record it in humpback whales for the first time, it really shows how much we still have to learn about these incredible animals. Our study confirms that the whales passing Vema during their long journey across the oceans are feeding. Seamounts can provide rich habitat for all sorts of migratory species and we urgently need widespread protection of the global oceans to ensure these habitats can persist.” 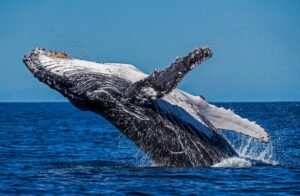 The expedition took place in November 2019 and used moored hydrophones to monitor humpbacks in the area. Most of the whale calls were detected during three consecutive nights, with low “whups” the most common sound. The “whup” is known to be used between mother-calf pairs as a contact call that helps them locate each other. Humpbacks also “whup” whilst feeding, confirming Vema as an important feeding ground.

The area around the Vema Seamount was heavily overfished after its discovery in 1959, and it is now partially closed to fishing and is recognised as a vulnerable marine ecosystem due to its unique biodiversity. However, due to the absence of a strong Global Ocean Treaty, it is still not possible to fully protect the area.

No legally binding international agreements exist to protect the network of seamounts in the High Seas, despite the fact that many are hotspots for biodiversity and are important for migrating species. 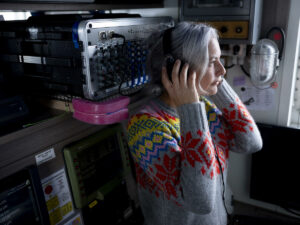 “Fifty years ago, governments came together to turn around the fate of humpback whales and seeing many populations thrive gives us a glimpse of their lives in the high seas. Only 3% of the global oceans are properly protected and that’s nowhere near good enough to safeguard habitats that whales rely on.”

Will McCallum, Head of Oceans at Greenpeace UK, said the UN treaty currently under negotiation would pave the way to creating protected areas in the global oceans:

“Once upon a time, the high seas were thought of as barren. Ground-breaking research like this shows not only that they are teeming with life, but that this wildlife migrates across the ocean, which is why we need to create a network of sanctuaries covering at least 30% of our oceans, including around areas like Mount Vema. The recovery of humpback whales is one of the most iconic success stories of global cooperation to protect nature: now they need a Global Ocean Treaty to help protect them for good.” 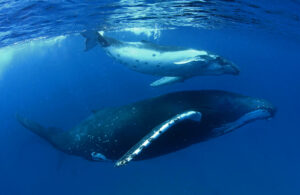