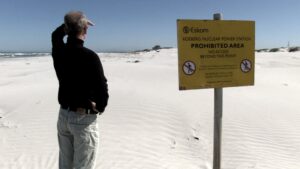 “Dr Tyobeka was in his post of CEO of the NNR for over eight years. His resignation comes at a time when there have been a number of high level concerns about decision making on nuclear energy, including Koeberg’s viability, errors in running of the plant, and the public’s safety regarding radioactive waste and the proposed life extension of Koeberg.

“Losing someone of Dr Tyobeka’s experience and skillset in South Africa and internationally, at this time raises questions about whether nuclear energy and Koeberg are being well regulated, whether safety is being put first,” said De Gasparis.

Organisation Undoing Tax Abuse (OUTA) Parliamentary Advisor, Liz McDaid, said: “For a skilled ambitious professional, it is not a surprising move. Dr Tyobeka was a person who stood up and demanded sufficient budget to ensure nuclear safety. But as we have seen, over the years, with the exposure and setting aside of the nuclear deal, and with only an ageing reactor at Koeberg to oversee, professionals need to make career choices.

“Eskom has admitted it has lost skilled personnel at Koeberg. Sadly, even with the decline of the nuclear industry, the legacy of nuclear waste remains. And South Africa needs a strong regulatory body to keep the public safe. Who will now head the NNR and will the government provide sufficient funds to ensure effective regulation?”

No reasons have been given for the CEO’s resignation apart from that he is leaving “to pursue his profession elsewhere.” The NNR is currently facing mounting calls from civil society for more transparency, an upcoming court case related to a complaint about the civil society representative and his subsequent dismissal by the Minister, and a looming court battle with OUTA regarding refusals for information requested under the Promotion of Access to Information Act.

There is also mounting controversy about the proposed life extension of Koeberg.

The steam generators and a tragic comedy of errors

This process has been controversial since a 2010 announcement from the Eskom Board that the steam generator replacement and life extension should go ahead. In 2014 Eskom signed a R4.3-billion contract with US firm Areva. This was followed by a series of problems with the manufacturing process which resulted in the partially manufactured new steam generators being air freighted to China, and then discarded as scrap metal. Finally, three new generators were shipped to South Africa in September 2020 and have been in storage ever since.

On the 3rd of January 2022, Eskom planned to take unit 2 offline in order to do major refurbishment work including the installation of the new steam generators despite the fact that the NNR has yet approved the life extension. Eskom then issued a media statement in mid-January that the outage was delayed as it was waiting for approval from the NNR.

Two weeks later, on the 17th of January, an anonymous source revealed that the building to contain the old radioactive steam generators safely was way behind schedule. There were also rumours that the steam generators were the wrong size and would need to be modified to fit Koeberg.

Then on the 18th of January, the NNR issued Eskom with a long awaited permission to replace the steam generators at Koeberg unit 2. On the same day unit 2 was taken offline for the refurbishment work.

This approval was done just after the community representative, Peter Becker, had been suspended from the NNR Board.

Shortly thereafter French contractors from Framatome arrived on site for the replacement work but then refused to start the job due to the building to house the radioactive old steam generators not being ready. The contractors left and the work has been rescheduled for September 2023.

Andrew Kenny, a long time proponent of nuclear power for South Africa, described the lack of preparation as ‘disgraceful’. Asking a question at the Nuclear Imbizo at the CTICC on 16 March, Kenny said: “Everyone knows you need a hot workshop for the old steam generators. Nothing fancy, a simple shed, probably airtight. Yet when Framatome arrived they were horrified … what happened?”

In response, Eskom’s Chief Nuclear Officer, Riedewaan Bakardien replied that he was “extremely disappointed” and that “We are currently conducting an investigation to get to the bottom of it…” but gave no indication of when that investigation would be concluded, nor if the results would be made public.

Eskom decided to continue with some of the work anyway, which will result in the unit being offline for six months now, as well as another six months when they try again to replace the steam generators in late 2023, resulting in additional electricity shortages.

But the slip-ups were not over. On 17 March it was reported in the Daily Maverick that a contractor had apparently wandered up to the incorrect valve and turned off one of the safety mechanisms on the running reactor of unit 1, thinking he was working on the offline reactor of unit 2. What is more, this was the second time such an error had been made and as a result the work had been suspended due to safety protocols not being followed.

De Gasparis said: “We again ask for Eskom and the NNR to be more transparent in their planning and for us to be included in the big decisions within these public entities. It’s extremely important that the public is not kept in the dark so that we are brought into the confidence and understand exactly the implications of the loss of highly skilled professionals like Dr. Tyobeka, as well as the ongoing safety issues at Koeberg and the big question mark over the life extension of Koeberg.”

Federation for a Sustainable Environment CEO, Mariette Liefferink, said: “The NNR experiences huge capacity restraints and does not possess the funding, nor the human resources, necessary to conduct proper planning, coordination and monitoring activities and remediation plans can only be implemented when finances are available.

“The Commission notes that stakeholders have voiced complaints regarding the lack of responsiveness and transparency in respect of data on radioactivity in certain areas. It is important for communities to have access to information that can be used to protect or realise their rights,” said Liefferink.

“It’s extremely strange and worrying that the CEO of such a body would resign at this time” said Project 90 by 2030’s Gabriel Klaasen.

“It leaves me and many other community members wondering why he would leave. Is there a reason that the captain has fled the ship? Should we be worried? Is there something he knows that we don’t?

“We need the NNR to be effective, but when someone in charge of safety leaves without explanation, it shows that the cracks may go far deeper than just the containment buildings. We need transparency and more importantly, accountability now” he said.

The NNR has said that public consultations regarding the controversial life extension of Koeberg will be taking place within the next three months. This is a very unfortunate time for our nuclear regulator to be without a leader, or with a new CEO who is still finding their feet and we can only hope that the organisation will still be able to effectively fulfil its mandate to protect the public and the environment.