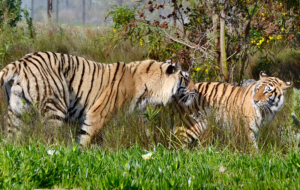 It sounds like a cliché but I am passionate about the big cats. Hence we are happy to share a story about the work of one sanctuary that has been a haven for rescued big cats.

With the tiger being synonymous with Slumberland, they recently supported Panthera Africa Big Cat Sanctuary‘s educational efforts with a donation of R10 000.

The sanctuary’s name was derived from the passion that the two founders, Lizaene Cornwall and Cathrin Nyquist, have for the 4 pantheras:

Their main purpose is to rescue captive born, exploited and neglected big cats and to be an educational platform on the plight of our big cats in captivity. It is important to understand how animal welfare and enrichment can play a vital role in granting the best possible life in captivity.

Big cats are under threat in the wild and exploited in captivity. Tourists and volunteers are often not aware of this and so this sanctuary speaks on behalf of the big cats. They even practice animal communication. 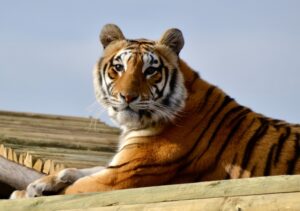 Threats to our big cats

The Campaign Against Canned Hunting (CACH) is a global campaign to outlaw lion farming in South Africa, which supplies canned lion hunting, animal petting, and the lion bone trade to the East. Farmed lions outnumber wild lions in SA by 3:1.

The tiger and lion bone trade

This is the Illegal poaching and/or legal breeding of big cats to be killed for body parts to be used in Asian medicines. A multi-billion dollar business, the buying and selling of fur and bones of protected wildlife is one of the largest sources of criminal earnings, second to arm smuggling and drug trafficking.

This is were the cub is removed from the mother so that she can breed again, then hand reared to be tame for the tourism and hunting industry. These adorable cubs are used as marketing tools across the world to attract tourists and volunteers to interact with them to be easily hunted as adults – either for a trophy or for its body parts. The price to shoot a tame lion and claim its head is up to R500 000. This is paid by many Americans, who contribute to over 50% of the lions killed. So too Europeans and Asians visiting South Africa. 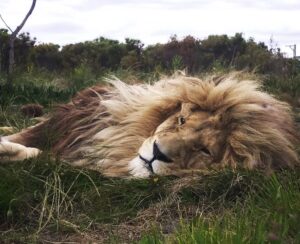 There is very little control over the numbers of captive lions in our country, as large numbers of lions are held and transported without permits. The estimated guess from industry experts is that there are on average 50 – 80 lions per project. And there are over 360 captive predator facilities. This means between 18,000 to 28,000 captive born lions in SA.

Many of these facilities argue that they are conserving wild lions by allowing hunters to shoot their lions rather than exploiting the threatened wild population. Yet the wild lions have decreased by over 80% over the last 50 years. Now there are less than 20,000 wild lions left across the whole of Africa.

South Africa has about 3000 wild lions across national parks and private reserves. The truth is that lions, tigers and many other species are bred for profit, and the money is made by playing on the heartstrings of thousands of volunteers and tourists believing they are contributing to conservation. 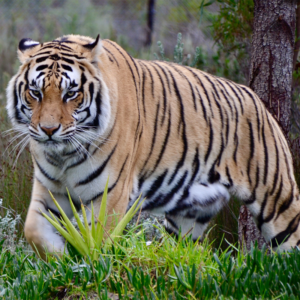 The world is becoming more aware of wildlife conservation and the dismal conditions under which animals are often held in small enclosures in zoos, without stimulation or hiding place from the public, bored and frustrated, often abused and starved. They can even get ‘zoochosis’ when they start pacing, twisting and rolling their necks.

They may then be given mood altering drugs such a Prozac to handle the problem and keep the complaints from visitors under control. Some zoos experience surplus problems and euthanise perfectly healthy lions and tigers. They breed to ensure constant cubs for visitors to pet and then run out of space for adults. 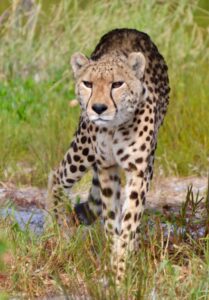 Cruel exploitation of animals in circuses

No wild animal jumps through burning hoops. Or sits on a chair, or gives a high-5! This comes from years of harsh punishment or beating. These animals have no choice to say no and act out of fear, not choice. The psychological agony of animals under training, transport and housing should be known and there is more and more awareness about the plight of circus animal.

Many organisations have worked hard to free wildlife from circuses. Many countries have implemented and banned this and more are coming. 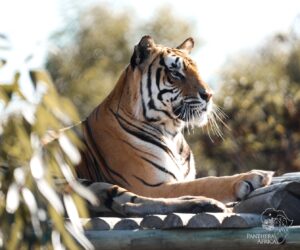 A surprising number of people try to keep wild animals as pets. In time they realise they cannot cope with them, then they are discarded or sent to sanctuaries. However there are not enough accredited places to look after all the discarded ‘pets,’ who then end up euthanized, abandoned or doomed to live in deplorable conditions.

The sanctuary believes these animals should be given a new chance in life and the best forever home possible with the highest ethical standards, where there is no hands-on interaction, no breeding or trading. This non-profit sanctuary is one of only 6 of the leading true sanctuaries in South Africa. 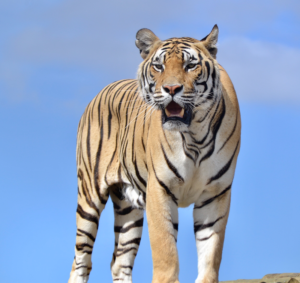 97% of tigers lost the past century

Wild tiger numbers are at an all-time low. We have lost 97% of wild tigers in just over a century. Tigers may be one of the most revered animals, but they are also vulnerable to extinction. As few as 3,900 exist in the wild today.

The sanctuary consists of a 40 hectare paradise with a beautiful home for the animals, the founders and the many volunteers visiting. The land is filled with lots of large trees, a natural spring and an 180 degrees mountain view.

Please read more about Panthera Africa’s work on their website or support their work by booking a tour or see more amazing photos on Facebook.

Kudos to Slumberland for supporting our big cats!