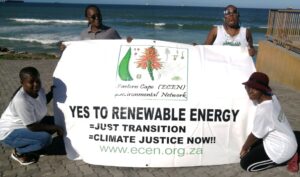 On Monday (25 April), The Green Connection launched an application in the Gauteng High Court in Pretoria seeking to review and set aside the National Energy Regulator of South Africa’s (Nersa) decision to grant three electricity generation licenses to the Karpowership SA companies to operate powerships in the ports of Saldanha, Ngqura (Coega) and Richards Bay.

Among other grounds of review included in the application, the NPO takes issue with Nersa having granted the generation licenses even though the Department of Forestry, Fisheries and the Environment (DFFE) had refused to grant environmental authorisations for the powerships, and without Nersa taking environmental considerations into account.

The Green Connection is also concerned over the negative climate change, environmental and economic impacts of the Karpowership companies being granted licenses to operate over a 20-year period to fill a short-term electricity supply gap.

Community Outreach Coordinator Neville van Rooy says, “The Green Connection believes that it does not make sense for Nersa to grant these electricity generation licenses to the Karpowership companies in these circumstances, and that in doing so Nersa has put the cart before the horse.” 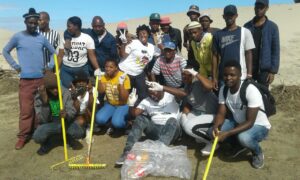 According to van Rooy, “Since it was first announced, the whole Karpowership debacle has gone against the spirit of fairness, and we believe that the granting of the licenses is not in the interest of the people, electricity users or small-scale fishing communities whose livelihoods could be adversely affected by the negative environmental impacts of the Karpowerships. Furthermore, Nersa has granted these licenses on the back of public participation processes where critical information was redacted from the documents made publicly available, including the terms of any Power Purchase Agreement (PPA) with Eskom. It is because of these critical discrepancies and blatant lack of transparency that we have turned to the courts for justice for the people.”

The Green Connection has also filed a supplementary affidavit by energy expert Hilton Trollip in support of its application. In his economic analysis – a critique of Nersa’s rationale and explanations regarding its decision to grant licenses to the Karpowerships projects –Trollip says that understanding and trying to assess the economic implications of the Karpowership deals was challenging, since final official agreements and tariff information have been redacted and are not publicly available.

To understand whether or not Karpowerships are a good economic investment, notwithstanding the environmental and potential subsequent social impacts, it is important to understand the country’s energy systems and how this relates to the calculation of end-user costs. In a nutshell, electricity generators’ costs are based on its technical and financial performance, thereby affecting the costs to users. Karpowerships seems to come in at the higher end of the cost spectrum. 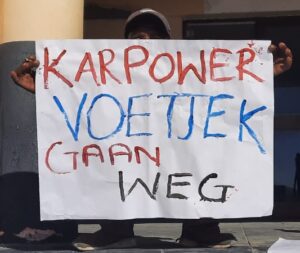 “Karpowerships are supposed to be an emergency electricity generation solution, which means that they should dispatch electricity only when there is a shortage – incidentally, this is the only time it makes any economic sense – unless obliged by specific PPA conditions. However, we do not know what these PPA conditions are since this information has been redacted. So, are the human, environmental and economic costs of the Karpowerships justifiable since it is only cost-effective to use them in an emergency? On the other hand, if South Africa were to rely on Karpowerships more frequently, there will be a net economic loss because ultimately the electricity they generate will cost consumers more in the long run. The Green Connection believes that the Karpowerships are utterly unsuitable to meet the country’s dire short-term electricity generation needs,” adds van Rooy.

The Green Connection is of the view that in granting these generation licenses, Nersa – as the custodian and enforcer of the electricity regulatory framework – is not safeguarding the needs and interests of present and future electricity users, as provided for in Electricity Regulation Act (ERA). The eco-justice organisation adds that it does not believe that Nersa is facilitating “a fair balance between the interests of customers and end users, licensees, investors in the electricity supply industry and the public.”

The Green Connection does not understand why these electricity generation licenses were rushed through when environmental authorisations had been refused, when there is already so much controversy around this project, and while there are still so many questions about the suitability and sustainability of the 20-year Karpowership projects as measures to fill the short-term electricity generation gap. The Green Connection has long wondered why government seems consistently willing to bend over backwards to progress these deals and hopes the court case will reveal its rationale. 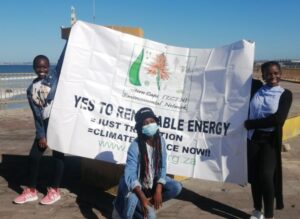 “In the long-term, we believe that Karpowerships are an unsustainable and inefficient solution to our energy problems. The reality is that after the company has bled South Africa dry for twenty (20) years, these floating kettles will not even belong to the country, but instead will remain the property of the Karpowership companies and will leave at the end of the contract period. Additionally, at a time when we should be taking steps to address the climate change crisis, why is the Department of Mineral Resources and Environment (DMRE) so keen to lock South Africa into a 20-year project that will emit significant emissions of methane (a greenhouse gas with more climate warming potential than carbon dioxide)?” asks van Rooy.

The Green Connection is also concerned about Parliament’s decision to abandon a probe – launched less than a year ago – into allegations about Karpowerships as part of the Risk Mitigation IPP programme. Among other discrepancies, the deal has been tangled up in a raft of controversies, including having initially been granted an emergency environmental authorisation (which was later withdrawn after a public outcry). Subsequently, after undertaking an environmental impact assessment process, the Karpowership companies were refused environmental authorisations for all three projects. While the Karpowership companies have appealed against these refusals, the appeals have not yet been decided.

For more information on these issues, follow The Green Connection on Facebook and Twitter. Also find educational, short videos on EIA processes and requirements (available in English, Afrikaans, and isiXhosa), on The Green Connection’s YouTube Channel. 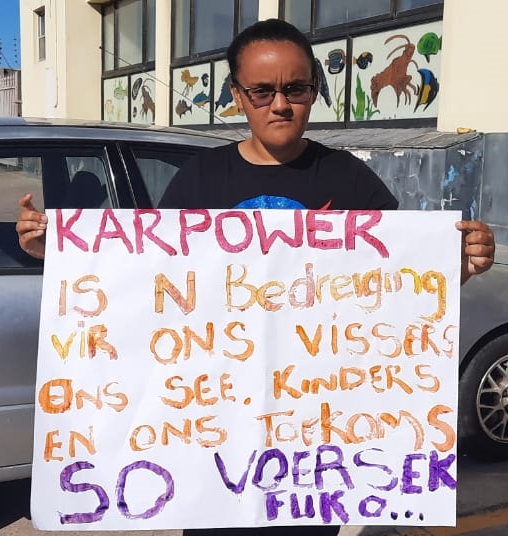 On Freedom Day, small-scale fishing communities in the West Coast and in Gqeberha held pickets to demonstrate their dissatisfaction with developments in the Karpowership saga, while fishers from Port St. John’s Eastern Cape demonstrated their love for the ocean with a clean-up.

Small-scale fishers in the West Coast say they are frustrated at seeing the powership vessel in Saldanha harbour because according to them, proper processes had not been followed. Many are dissatisfied with the “half-baked consultations” which did not include specialist studies about the potential consequences of the underwater noise that will be generated by the ships and the subsequent impacts on the environment and marine resources of Saldanha Bay.

Natalie-Jane van Wyk (a young fisher woman) from the West Coast says, “We feel that we do not have our freedom of choice. The karpowership has just docked in our harbour, even though we do not want them here. These ships will affect our fish and marine ecosystems, thereby affecting our livelihoods. We depend on a healthy ocean and marine environment for our livelihoods.“

Another West Coast fisher woman Carmelita Mostert says, “Small-scale fishers in the West Coast are angry that a Karpowership has recently docked in Saldanha harbour, especially since we have had no meetings with Karpowerships, nor have we participated in any related environmental impact assessments (EIA). Yet here they are. This is not right. We should get a say in this matter. This project is supposed to last for twenty (20) years. What will be the potential consequences for the bay and its people, over this period?”

In Port St. John’s Eastern Cape, small-scale fishers did a beach clean-up to send a clear message to decision-makers that they value the ocean because it sustains their livelihoods and those of their communities. According to small-scale fishers Ntsindiso Nongcavu and Nandipha Nogwina, while they may not be directly affected by Karpower, they opposed offshore oil and gas projects, which threatens the wellbeing of the ocean and also that of coastal communities. They say, “How can we celebrate Freedom Month when our own government is selling our ocean to foreign companies to drill for oil and gas? And they do so, without even consulting the people.”

In Gqeberha Eastern Cape, fishers No to Karpowership. No to Nuclear. And No to fossil fuels. YES TO RENEWABLE ENERGY

Vuyiseka Mani and Bulelwa Zikizela from Gqeberha say they will never enjoy Freedom Day until fisher communities are free, and their voices are being heard.

Mani, who works with the Eastern Cape Environmental Network (ECEN), says, “It is very disappointing that almost 30 years into our democracy, we are still fighting for our human rights and for our voices to be heard. We do not have the freedom of participation in decision-making we thought we would around environmental justice issues. We want government and the Karpowership companies to consult us on this issue because without meaningful consultation with those who will be affected, our rights will continue to be violated.”

Zikizela, who is with West Massa Movement (which is part of ECEN) in Joe Slovo in Gqeberha, says, “After 28 years into democracy, it is concerning that even though the masses have been opposing this Karpowership development, the government still pushes on to continue with this project, even going so far as to say that this is sustainable development. This is not true. We are saying “NO!” to Karpowerships and “NO!” to any form of fossil fuels as this remains harmful to the environment and the livelihoods of small-scale fishers. And furthermore, we are in a climate emergency.”