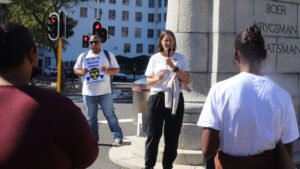 It has been five years since the High court ruling (on 26 April 2017) that exposed the severity of state corruption and halted government’s “illegal and unconstitutional” R1-trillion nuclear energy deal with Russia.

This collective action, which gave Freedom Month a whole new meaning to all those involved, was a national effort by many civil society organisations, academics and concerned citizens to stop then-President Zuma’s unlawful nuclear deal, thus sparing South Africans from the effects of the bankruptcy (according to economists, at the time) that would have ensued.

In Cape Town, a vigil – joined by about 170 people – was held outside Parliament, while in Johannesburg a picket formed outside the Constitutional Court.

According to the Southern African Faith Communities Environment Institute, SAFCEI, Executive Director Francesca de Gasparis, “We are still facing many challenges in government energy planning, which are a renewed threat to our very existence under the spectra of climate change. However, our vigil (on Tuesday) was about what happened in five years ago. Lest we forget the court judgement, for the sake of all South Africans, that came down on the eve of Freedom Day. If the nuclear deal had gone ahead, it would have affected all of our freedoms. The unlawful nuclear deal revealed the extent of the deep rot within government – which continues to be exposed through the Zondo Commission into State Capture. It also showed just how far members of State were willing to go to dupe the public, in the bid to push the deal through. For those who realised what this could have done to our economy, to our future and to our development, 26 April 2017 will be remembered as a pivotal moment.”

“Despite huge court rulings like the nuclear case, government decision-making continues to be a reflection of vested interests that seem to favour nuclear and fossil fuels. Nonetheless, as seen with the groundswell of actions against seismic surveys, around the country, it is clear that South Africans are increasingly standing up to demand that their right to be consulted is respected, especially in energy procurement and where projects may harm the environment or exacerbate the climate crises, and negatively affect livelihoods,” says de Gasparis.

According to the latest IPCC report, carbon emissions are still rising, and the Earth’s atmosphere continues to warm at a dangerously rapid rate. Unless more ambitious steps are taken, global warming will pass the 1.5 ̊C threshold by 2030, when catastrophic impacts – like the destructive KwaZulu-Natal floods – can be expected at devastating frequency and severity. These floods are more evidence that the escalating climate emergency is a reality.

“The government’s current approach to energy production, often coupled with a lack of transparency and public participation, is our country’s biggest barrier to a just transition. It is concerning, as it seems as though South Africa is deliberately choosing fossil fuels and nuclear, while implementing renewables at a snail’s pace. The country needs development that is pro-poor and affordable basic services must be available to all, which should include affordable and accessible electricity. This means that the country’s energy plans should work to reduce the gaps in inequality, as well as reduce the widespread energy poverty. As such, government must recognise that renewables create more jobs – with wider variety and in more flexible locations, which can be installed in a matter of months – when compared to nuclear,” adds de Gasparis.

“Ongoing issues at Koeberg nuclear power station have been a significant part of the reason that citizens continue to be plunged into darkness. We must recognise Koeberg’s deteriorating performance and continue to call out the ongoing governance issues at Eskom and the Department of Mineral Resources and Energy (DMRE).”

Earthlife Africa Johannesburg’s Nomalizo Xhoma joined the youth from the Climate Action Justice Group in a picket outside the Constitutional Court. Xhoma says, “We need our government to be far more climate-conscious and to proactively speed up the move toward the just transition. Successful energy planning can only be achieved if the people, particularly those vulnerable and marginalised communities, are meaningfully involved. Through meaningful public consultation, government will be in a better position to choose more suitable and realistic energy options, which have more chance of reducing inequality and energy poverty, but which will also adequately address the climate crises. Nuclear energy is not such an option.”

Xhoma continues, “If government was serious about the just transition, which requires greater stability, it would immediately begin to invest more diligently on a flexible and decentralised electricity supply. Meanwhile, nuclear power stations’ performance, both in South Africa and globally, have not proven to be particularly reliable. Then, the outdated argument that nuclear energy is necessary for baseload, coupled with the centralised nature of this type of energy, are further reasons to reject nuclear. It is not fit for purpose for our current and future energy needs and completely ignores the strides made in modern technology. And while it does not have as large a carbon footprint as coal, gas and oil, nuclear power operations are estimated to be at least two to four times more than that of renewables. Furthermore, this outdated and largely failed technology is very expensive and often takes many years to come online.”

SAFCEI Board Chair Braam Hanekom says, “At the moment there is a huge break in the trust between the population and the government. And whenever government takes decisions on its own, the distrust just grows. This leads people to ask several valid questions because we see decisions being taken and we see the corruption that is not in the public interest, and which is not in line with the sustainable future we want. That is why there must be more transparency and inclusivity because the people want to be part of the future.”

SAFCEI’s Faith Leader Liaison Reverend Berry Behr says, “It is so important that we celebrate this victory because it gives us hope for the future. It shows us that ordinary people can actually prevail and win when government does something that we do not agree with or do not stand for. We have a voice, that is what this victory reminds us of every single day. Also, the energy of celebration itself just lifts us and carries us through for the next steps, in our efforts to safeguard our Earth for future generations. South Africa has been blessed with an abundance of sun and wind energy. Electricity should not be viewed as a luxury for the fortunate few, and these resources are so accessible and should mean that every single person in this country has access to affordable energy.”

Koeberg Alert Alliance’s Peter Becker says, “A key lesson from this victory celebration is that government must understand that unlawful actions will be challenged in court and set aside. Chasing nuclear is a huge waste of money and time, and I would encourage government structures to work with civil society to avoid the necessity of court challenges. The right of the public to participate in government decision making is enshrined in the constitution, and that can only be meaningful if the public is informed. As such, the application by Eskom for a 20-year life extension of Koeberg must be subject to a rigorous public consultation process, and any attempt to keep any part of that process secret is unacceptable.

“Furthermore, Koeberg was built in the 1970s and clearly does not have the safety features of modern designs. The true cost of extending the life of this aging plant is unknown, as Eskom has not been transparent about it. The cost of spent fuel disposal is unknown, so no-one can say what the true cost is. Everyone agrees the future of energy is renewable and since utility-scale projects could be ready in less than half the time, we should be working towards that goal, rather than spending tens of billions of rands to try and get an old nuclear plant closer to modern safety standards, just so that it could last another 20 years,” adds Becker.

SAFCEI’s Lydia Petersen says, “Nuclear is not affordable nor is it a safe energy source. Incidentally, the anniversary of the Chernobyl disaster coincides with the day the nuclear court case was won. With this, as well as the Fukushima disaster in mind, a major concern for Western Cape communities is the growing levels of toxic high-level radioactive nuclear waste currently stored at Koeberg, for which there is no safe, permanent solution. If the plant’s lifespan is extended, what will happen to the increasing waste stored on-site? What about the increase in low-level waste that will be sent to Vaalputs, in the Northern Cape? This is something those communities did not ask for. This is why we do not agree with government’s plans for nuclear energy in our country. We want renewable energy. It is the people’s power.”