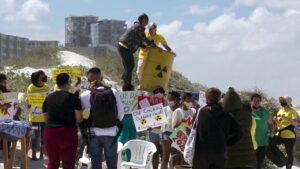 An anti-nuclear demonstration held on Bloubergstrand Beach on 16 December highlighted concerns of Capetonians about the implications of Eskom extending Koeberg’s lifespan next year.

The nuclear plant reaches the end of its 40-year lifespan in 2024 but Eskom is trying to extend its operating life by another 20 years before any public consultation.

“Quite a few residents who approached us did not know about the implications of Koeberg’s life extension.

“It was also a great opportunity for faith leaders to share their concerns about the ongoing secrecy surrounding Koeberg. Residents are not adequately informed about plans proposed for the plant and how it could affect them.” 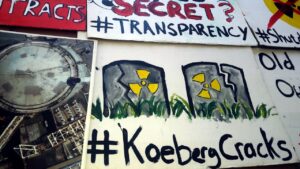 Has due process been followed?

“SAFCEI joined in the protest yesterday to highlight ongoing issues at Koeberg nuclear power plant, including the lack of transparency or consultation with the public, too little information on safety issues, and the reported loss of key staff,” says SAFCEI Executive Director, Francesca de Gasparis.

“A lot is happening in terms of decisions on energy provision by government at the moment including the seismic exploration and karpowerships which will not help us to reduce our dependence on fossil fuels. The plans for the Koeberg nuclear power plant are another example where due process does not seem to be being followed. Eskom’s intention to extend the life of the plant for another 20 years has not been shared with the public and the desirability of a nuclear power plant at this site needs to be questioned,” she says.

Loadshedding in 2022 will be made worse by this refurbishment

“There have been several responses to use along the lines of ‘We cannot shut down Koeberg because we need electricity!’” says KAA spokesperson, Peter Becker.

“This misses the point of what we are calling for. Everyone agrees that we need electricity, and so the question is what is the best way to spend money to achieve that.

“We are asking Eskom to keep the plant running in 2022, and to shut it down as planned in 2024. By that time other plants would have been repaired, and new renewable energy installations will have come online,” says Becker. 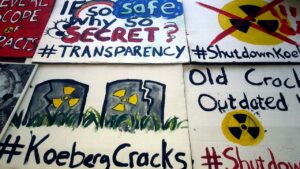 Eskom has announced that the first reactor will be offline from 3 January to 17 June 2022 in order to do the work needed to replace two steam generators, which is a necessary step towards extending the life of Koeberg.

Eskom spokesperson Deidre Herbst recently announced that in order to comply with emission standards, Eskom will need to take16,000MW offline, and threatened the country with continuous stage 8 load shedding. If both Koeberg reactors are running they provide enough power to reduce load shedding by about two stages, since it is 1,000 MW per stage.

“It does not make sense to shut down reactors during 2022 when we need every kW of electricity we can get, just so that the plant can run after 2024, by which time Eskom will have had time to improve the reserve margin.” says Becker.

On the same day as the protest (16 December 2021), the French company EDF found cracks caused by corrosion in the pipes of reactors at the Civaux plant, leading to the pre-emptive shut down of that plant, as well as the Chooz plant which uses a similar design. These plants use 1,400MW pressurised water reactors (PWRs), which are similar to the 900MW PWRs used at Koeberg. Overnight, France lost nearly 6,000 MW of generating capacity.

“The French story should lay to rest the myth that nuclear power is safe and reliable,” says Becker.

“And it also raises some serious questions about safety, such as does Koeberg suffer from the same problems?”

Eskom has been secretive in the past about the extent of the corrosion damage at Koeberg and SAFCEI are currently awaiting a response from them to a Promotion of Access to Information Act request about that damage submitted on 2 December 2021. When asked previously by the KAA for a copy of a report into corrosion damage, Eskom provided a document with half the content blacked out.

Given the huge pressure on Eskom to avert load shedding and keep the lights on, there is concern about whether Eskom staff would be as safety conscious as EDF if they encountered the same issues at Koeberg. This is fuelled by the fact that the corrosion damage found in 2018 is being kept secret. If it had been fixed since then, it would be reasonable to expect Eskom to happily share the information about the damage found and the subsequent repairs.

A recent Daily Maverick article reported that some work originally planned for the long term operation refurbishment will no longer be done and that this has allowed the budget to remain the same as it was in 2010 despite escalations for other reasons. One example was reported to be the replacement of the condenser tubes which is no longer considered necessary. “It is concerning that a component originally thought unfit for an extended life time, is now not being replaced after all, perhaps due to budgetary pressures,” says Becker.

In response to questions from the Daily Maverick Eskom CEO André de Ruyter said that the electricity from Koeberg cost 42c per kWh generated.

“There is a long history of claiming the cost of nuclear power is much lower than it really is” says Becker.

“This is another example, as the cost will obviously go up if the R20bn refurbishment is taken into account, but de Ruyter is quoting the pre-refurbishment cost.”

“With the two recent earthquakes approximately a year ago, a disaster could be in the making here. Along with expected sea level rises and increasingly unstable weather due to climate change, our view is we should not be investing in the extension of this nuclear power plant life,” says De Gasparis.

“One of the reasons why we came out of our homes for a gathering and demonstration, despite the Covid-19 situation, is because, once again, we want to be visible. We want our government to see that we exist, and we have a voice. They must listen to us.

“Koeberg plant is becoming more dangerous as it gets older and we need Eskom officials to appeal to their conscience and make a proper decision by not extending the life of Koeberg. We know that there are good people in Eskom and in our government, we urge them to not betray their conscience, and they must not betray their communities. We urge them to stop the life extension plans for the Koeberg plant,” says Magwaza.

It was only after the alarm was sounded by civil society organisations and concerned citizens about the apparent plans for Koeberg and the controversial contract with the US engineering firm, that Eskom disclosed that an application to operate Koeberg beyond 2024 had been submitted to the National Nuclear Regulator (NNR).

“SAFCEI’s view is that, before a license to extend the power plant should be approved, due processes should be followed,” says De Gasparis.

“This includes a public participation process that will allow locals and electricity users at large, to be part of the process. Right now, it seems as if the proverbial cart has been put in front of the horse.”

Esau says: “What was important was that a number of young people were there to stand up for their future. This event really brought together a broader community who are concerned about what extending the plant could mean for all of us. We hope to have further social justice initiatives that link to the demands from GreenFaith, which says that the desecration of the Earth must stop. We must show respect for the spaces and land that we occupy and we must also uphold indigenous rights.”

“The greater Cape Town population has grown in the last 40 years and dwellings are now situated far closer than when it was built. Koeberg is coming to the end of its life span and to extend its operations without looking into issues now and in the future in a transparent manner is not right.”