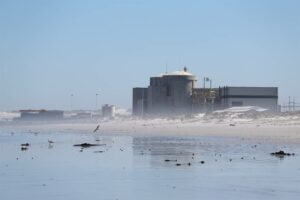 “It has been nearly two weeks since Minister Gwede Mantashe suspended the civil society representative on the board of the National Nuclear Regulator (NNR) and still the public is none the wiser as to why. Many in the energy justice space are questioning the timing of the suspension as Koeberg unit 2 is shut down. The aim of the NNR board is to ensure nuclear safety and to provide oversight of nuclear activities. The civil society representative is stated in the NNR Act as being “one person representing communities, which may be affected by nuclear activities”. We are concerned that our representative has been suspended without any information shared, while the Board continues to do its duty without a civil society representative for affected communities,” says the Southern African Faith Communities’ Environment Institute’s (SAFCEI) Executive Director, Francesca de Gasparis.

The multi-faith NGO says that it is particularly concerned that this has happened as replacement operations begin at the Koeberg Nuclear Power Station. The cost and extent of the planned maintenance that started on Unit 2 includes major replacements of three steam generators and the reactor pressure vessel head. The new steam generators and reactor pressure vessel head are costing tens of billions of rand and are not in keeping with the reality that the Koeberg nuclear power plant is at the end of its functional life and should be decommissioned in 2024. The extent of replacement activities indicate that life extension operations are being carried out without a proper approval process.

Eskom was quoted in the press in October 2021 as saying that “The steam generator replacement is a key part of the larger programme to extend Koeberg’s operating life, which was budgeted to cost an estimated R20-billion, and will be the best investment into sustainable and less carbon-intensive electricity generation infrastructure that Eskom can buy,” the power utility said.

“Once again, we see energy decision making being agreed outside the regulatory framework, and not in keeping with our constitutional rights. In essence, the NNR has allowed Eskom to proceed with plant life extension operations at the ageing and unreliable nuclear plant without formal approval. Without proper consultation and careful scrutiny, many unanswered questions regarding Koeberg’s safety remain, and now without public oversight in the form of the civil society representative,” says de Gasparis.

“Safety concerns at Koeberg range from reports of cracks in the containment buildings – which are the outer walls of the reactor buildings – to the removal of the plant’s Managing Director, to insufficient safety information available to the public. These are all issues that have not been adequately explained to the public. SAFCEI questions whether the recent unexpected earthquakes in the region have been factored into refurbishment plans, since the public has been excluded from this very crucial decision-making process,” she says.

“It is unacceptable that once again there is no civil society representative on the board of the NNR at this critical time. This public oversight position had been left vacant for many years, prior to Mr. Becker’s appointment. Affected communities such as people living near Vaalputs – a radioactive waste dump in the Northern Cape – as well as the communities surrounding Koeberg, have the right to be represented by someone who have their interests at heart. It took the DMRE nearly ten years to fill the position, and it is during this time that the government tried to push through the illegal R1-trillion nuclear deal.”

“At this critical time, when important and long impacting decisions need to be made for nuclear safety and the future of the Koeberg nuclear power plant, to remove the civil society representative seems to be a cynical move, further separating the general public from their rights to have safe, affordable and accessible energy provided,” adds de Gasparis.

Furthermore, at a time where secrecy and the deliberate exclusion of the public’s voice in energy decisions seem to be intensifying, the DMRE has also recently proposed a number of questionable changes to the National Nuclear Regulator (NNR) Bill. These changes will ultimately lead to an easing the Regulator’s scope of control, while at the same time giving the DMRE too many powers over regulations and requirements for transparency, seemingly to drive its nuclear energy agenda, unhindered. This will weaken nuclear safety governance because without adequate safeguards and separation of powers in place, risks to South Africans will increase, since there are fewer controls and less oversight over processes that were put in place to protect citizens.

“The amended Bill would mean that the Regulator can permit pre-construction activities to go ahead, in preparation for the construction of a nuclear facility, even if the relevant licensing are not in place. From what we are seeing, it seems that all efforts are being made to reduce the mechanisms in place to guide ethical energy governance in nuclear procurement to pave a smooth, unhindered way forward for the government’s aspirations for this failed technology,” adds de Gasparis.

Peter Becker – a well-known and vocal environmental justice activist from the Koeberg Alert Alliance – was nominated by several organisations in late 2020 and appointed to the Board in June 2021. However, since being informed of his suspension last week, according to Becker, he has not been allowed to attend Board meetings.

According to SAFCEI, the NNR seems to be largely failing to maintain its values when it does not act in a non-biased, fair, objective, honest, reliable, nor principled way. There is little transparency in the regulatory decision-making process and in the communication of regulatory decisions.