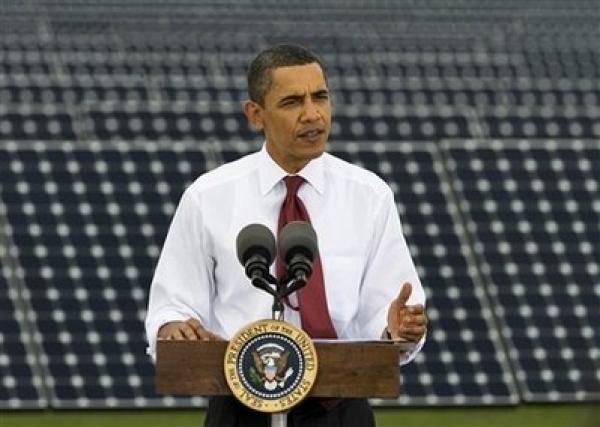 The most famous seat of power in the world, the White House, is going solar. This announcement precedes the world’s most widespread political demonstration ever, calling for leaders to act climate change.

Barack Obama’s Secretary of Energy, Steven Chu, today announced that by early 2011 solar panels on the presidential mansion will be generating hot water and electricity.

“President Obama has a strong commitment to American leadership in solar technologies and the jobs they will create.” he said.

On September 10th activists from 350.org, a global climate action campaign, travelled to the White House with a solar panel originally installed there in 1979 by President Jimmy Carter – later removed by President Ronald Reagan – to ask Obama to return solar power to the roof of his residence.

Although the activists were greeted with a non-committal response by White House staff, today’s announcement comes just before 350.org is to co-ordinate the world’s most widespread political demonstration in history in support of action on climate change.

On Sunday October 10th people all over the world will be joining the 10/10/10 Global Work Party to pressure their leaders to act on climate change. Over 7 000 communities in over 180 countries, including most countries in Africa, will taking action to reduce their climate impacts by planting trees, building cycle paths, and promoting renewable energy. This will make it the most widespread demonstration in history for any cause.

Tomorrow, October 6th, President Mohamed Nasheed of the Maldives will be installing solar electricity-generating panels on that country’s presidential residence to promote the Global Work Party. The low lying island nation is threatened by rising sea levels triggered by climate change, and President Nasheed has committed his nation to becoming 100% carbon neutral.

African events planned for 10/10/10 include a climate boxing tournament and tree planting in Nairobi, Kenya, solar hot water heaters for Nelson Mandela’s old prison island near Cape Town, South Africa, and an nationwide climate campaign on Mauritius in the Indian Ocean. There are about 200 Global Work Party events planned across Africa.

“Africa will be more affected by climate change than any other continent. We must encourage our political leaders to act by leading the way” said Landry Ninteretse, a 350.org activist in Burundi. “If we can get to work on October 10th to make our communities greener, they can get to work on a strong, enforceable plan to combat climate change. Anyone can visit our website to register a new event or find out about 10/10/10 events near them.”