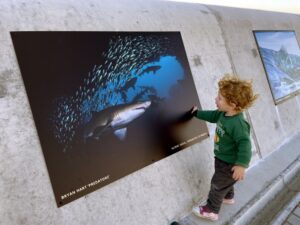 Two public art installations along the Sea Point promenade, 22 photographs and a 16 square metre mural, remain as a legacy of love and ocean awareness left by the Wavescape Surf & Ocean Festival.

As a gift to the thousands who walk the promenade, the finalists of a special photographic competition were placed along the sea wall opposite the Winchester Mansions Hotel.

The Ocean photographic contest, which ran in the leadup to the Wavescape festival in March, attracted almost 3,000 entries from photographers who submitted work taken in South African locations, including seascapes, underwater shots, as well as marine fauna and flora. 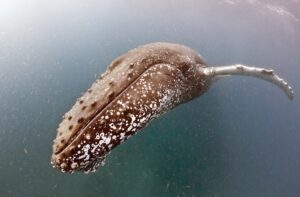 “Curious Leviathan” by Steve Benjamin, shot in Noordhoek on a Nikon D70.

The competition was brought together by Wavescape, Orms, Canon and SJ Artists. A panel of judges from the four chose 22 of the most poignant aesthetic representations of the joy and wonder of the ocean. The winning image, taken with a GoPro by Capetonian Chris Hitchcock, depicts Lewis Pugh as he swims across False Bay.

To amplify this message of love and ocean awareness, renowned Durban graffiti and mural artist, Kevin Ngwenya, known as Kev Seven represented by SJ Artists, created an artwork on the Milton Road ablutions further down the Sea Point promenade. 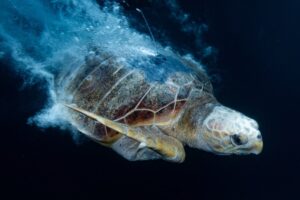 “Freedom at Last” by Cleeve Robertson, shot 70km off Cape Point in the warm Agulhas current on a Nikon 810.

Love Ulawandle, which is isiXhosa/ isiZulu for Love the Ocean, conveys a unified and inclusive voice for keeping our oceans clean. The installation was assisted by the South African PET Plastic Recycling Company (Petco), who support projects that keep plastics from entering the oceans.

Director of the Wavescape Surf & Ocean Festival Shani Judes was proud of the success of the two installations. She said the photo contest was a tough one to judge “with such a diverse array of beautiful and moving submissions. After many weeks of careful consideration and thoughtful deliberation, we are proud to present this spectacular selection of the 22 best images.” 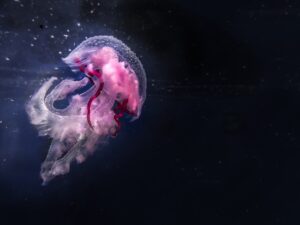 “Galaxy Drift” by Keri Muller, shot in Simonstown on an Olympus TG5.

Jason Ormrod from Orms said: “In this unprecedented time in human history, the works by our artist and photographers honours and encourages a symbiotic connection between humans and nature. As we are reminded of the powerful quote from Senegalese environmentalist Baba Dioum back in 1968, we truly believe that these images have the power to ignite a deeper passion for the wonders of the waters just off our coastline. We hope that revealing this glimpse of what lies beneath the waves will foster in all of us a sense of stewardship for the ocean and all those who call it home.” 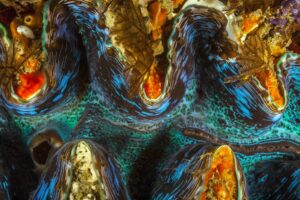 Dioum’s famous quote, later adapted by veteran environmentalist David Attenborough, is “In the end, we will conserve only what we love; we will only love what we understand and we will understand only what we have been taught.”

The photographic installation included a call to support the National Sea Rescue Institute (NSRI), who rely on public donations to continue their ocean safety work. To date, the NSRI has educated three million children about how to be safe around water. 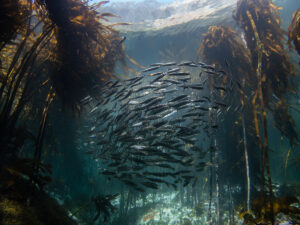 The festival was presented by Vans, with Save Our Seas Foundation, the PET Recycling Company (Petco), Jack Black Beer, Wesgro, Cefas, Wild Oceans and Gone Outdoor. 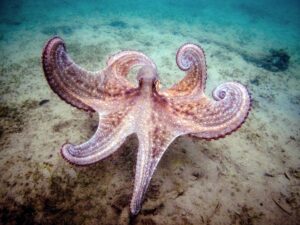 “Herbert” by Helen Walne, shot at Knysna Heads on an Olympus Touch TG6.