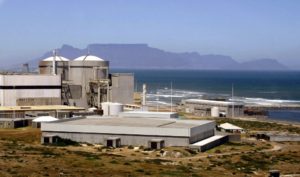 The Southern African Faith Communities’ Environment Institute (SAFCEI) says a combination of factors currently impacting the Koeberg Nuclear Power Station (Koeberg), on top of Eskom’s inability to keep the power on, could result in the perfect storm for the country.

SAFCEI’s Executive Director Francesca de Gasparis says, “It is disturbing that one of Koeberg’s two units has been offline since January, yet the government continues to insist that nuclear power is our most effective and reliable power source.”

“The latest announcement that investigations into the performance of Koeberg have been launched, after the suspension of its general manager Velaphi Ntuli, is just another indictment against Eskom. South Africans continue experiencing load shedding – which stood at Stage 4 on Wednesday 9 June – while in the grip of a rather harsh winter and the third COVID-19 wave, which means people are without heat, and unnecessarily so. Electricity is already unaffordable for many households,” says de Gasparis.

It was also recently reported that Energy Expert Ted Blom, uncovered a deliberate attempt, by Eskom, to mislead citizens when South Africans were told last week that it was implementing Stage 2 load shedding; parts of the country were actually on Stage 6.

SAFCEI – pivotal in the court case to stop the illegal R1-trillion deal, in 2017 – has long been calling out issues of mismanagement and poor ethical governance at Eskom, which has been a ‘star’ of the Zondo Commission of Inquiry, for all the wrong reasons. CEOs like Matshela Koko and Brian Molefe were all implicated in the Public Protector’s ‘State of Capture’ report, and now the General Manager of the high-risk Koeberg plant has been suspended.

de Gasparis adds, “This latest situation at Koeberg is just more proof that checks and balances that should be in place to protect the rights of South Africans to affordable electricity are not in place.

Nuclear energy is dangerous and even more so when not managed effectively as has clearly been the case for all of 2021. Why has the civil society representative appointed to the National Nuclear Regulator (NNR) Board, Peter Becker, not been allowed to attend Board meetings and what decisions are being taken on our behalf without fair representation at the table?”

“In addition, the Minister of Mineral Resources and Energy Gwede Mantashe, in Parliament just last month, insisted that Koeberg would remain a critical part of South Africa’s energy (and economic) future, while taking no responsibility for any of the safety and security risks to citizens, since Eskom falls under the Department of Public Enterprises.”

“The fact that half of Koeberg has been offline for such a long time, is not only proof that the nuclear power plant is not critical to SA’s energy supply, but that there must be more transparency and public participation on issues surrounding the plant, and in our energy decisions in general. It is not helpful for government to simply dismiss the valid concerns of its citizens. Why did Minister Mantashe not mention that half of Koeberg has been offline since January, when he responded to questions in Parliament? Instead, in his motivation to extend the failing plant, he claimed that Koeberg “does not give us problems in terms of capacity and power availability”,” says de Gasparis.

She says, “We emphatically disagree with the minister when he says that “Koeberg is no Chernobyl,” since it was the secrecy and misinformation that resulted in the disaster becoming as devastating as it was. To this day, thirty-five (35) years later, the ongoing nuclear activity remains a risk for the people of Ukraine. Rather than helping with the country’s energy supply, Koeberg is a massive liability. The Minister’s claim that the plant life extension “will improve chances of power availability” is extremely short-sighted and ignorant. Nuclear is not the silver bullet that will solve our energy issues.”

SAFCEI urges government to heed research, listen to civil society and learn from past mistakes and stop its nuclear aspirations. Instead, it needs to take the climate emergency more seriously, and to start preparing the country for the move toward the just transition to affordable and accessible renewable energy. In all the discussions about Koeberg – especially regarding the lifespan extension – no decisive plans are shared about permanent solutions for the growing amounts of high-level radioactive waste stored at the plant. These energy sources will leave an impossible burden of toxic waste and climate change on future generations. The reality is, no matter how the pro-nuclear lobby tries to spin it, nuclear energy is not renewable nor is it safe.

Makoma Lekalakala, Director of Earthlife Africa Johannesburg – SAFCEI’s partner in stopping the nuclear deal – adds, “The suspension of Ntuli, amid concerns of hidden radioactive leakage, should lead South Africans to start with high levels of disaster preparedness, which is long overdue. What is next? An accident? The whole country is at risk, devastating risk. We should be in panic mode.”