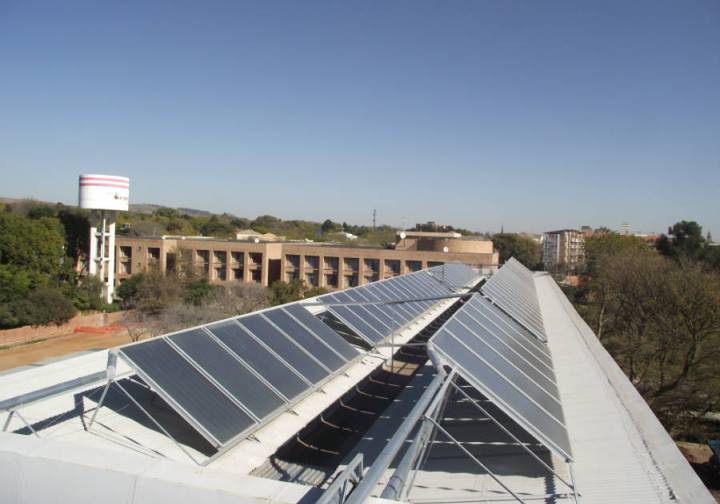 Sustainable Energy Society of Southern Africa (SESSA) member Holms and Friends has installed a solar water heating system at the University of Pretoria (UP) which – with a total 672m2 collector surface – is the biggest glazed installation in Southern Africa.

The installation at the university’s veterinary campus, Onderstepoort, meets the warm water demands of its new energy efficient residences housing 550 students. It also avoids the production of 450 tons CO2 and saves 600 980 litres of water each year.

“The savings are remarkable, the system is fully functional and a pleasure to watch in action,” said Alec Blackhall, manager residence affairs and accommodation, UP.

It also provides training in the renewable energy and energy efficiency sector as well as education for sustainable development.

Onderstepoort, or OP as it is commonly known, is situated in Pretoria North and houses South Africa´s only Veterinary Faculty.

This area falls within the Northern Middleveldt, a climatic region characterised by its distinct rainy and dry seasons. Temperatures show a large daily variation and strong solar radiation is prevalent.

This promoted Holms and Friends to specify SUNDA PG2.0-F/G flat plate collectors instead of the costlier but more efficient vacuum-tube collectors. Some 336 two-meter2 collectors were installed on top of the campus carport and rooftops. Three collectors were connected in parallel, and then two parallel ‘strings’ connected in series resulting in a thermal length of 12 meters. The total capacity of the installation – 430kWth – could produce 404 700 kWh electricity a year.

One central feeder tube transports the warm water to a building constructed next to the carport to house the heart of the system: two giant 20 000 litre water storage tanks, an expansion tank, membrane expansion vessels (totalling 5 400 litres) and seven external heat exchangers amongst other.

The water heated by the solar panels is stored in the buffer tanks. Through external heat exchangers (that is, exchangers not housed in the tanks themselves), a different continuous fresh-water supply is warmed and distributed to the individual residences.

This results in an indirect loop system, which automatically complies with health standards without having to manage a major maintenance programme, since it will never be used for human consumption. It is, simply, the ‘working fluid’ of the system.

The water is distributed through pump-circulation, via 40 mm diameter heavily insulated pipes. These are mounted on steel frame structures, reaching each residence on campus.

A safety measure has been put in place for those periods when the system is not in use; for instance, over the December holidays. During that time, the system could get extremely hot and the water can expand, sometimes even reaching a gaseous state.

Merely using open expansion vessels would result in having to continually top up the working fluid, leading to corrosion and contamination of the system. Holms and Friends therefore specified membrane expansion vessels for the project. These, and all other components for the system, are ‘Made in Germany’ quality and are directly imported or locally produced.

Normal grid-connected electric heating serves as a back-up for the system. However, in the six months since it went live, it has not been necessary.