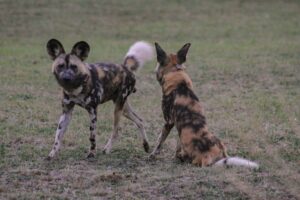 On Saturday 2nd April 2022, Hluhluwe-iMfolozi Park (HiP) in KwaZulu-Natal released it’s newest pack of African Wild Dogs, which is composed of four 3 year old males who were originally brought into the reserve from Tswalu Kalahari Reserve at the end of 2020, and two 2 year old females born in HiP.

African Wild Dogs are Southern Africa’s most endangered carnivore with an estimated 5000-6000 individuals left in the wild, of which 650 individuals are found in South Africa.

“Due to the highly fragmented conservation landscape across South Africa, the instinctive behaviour of young Wild Dogs to disperse in search of mates can cause individuals to come into direct conflict with adjacent land users as they try to leave in search of new mates,” explains Wildlife ACT’s Wild Dog Programme Manager Mike Staegemann.

“HiP, through informed decision making and proactive measures, have been able to reduce potential conflict through the early capture and relocation of dispersal groups, in so doing improving local perceptions about Wild Dogs and associated Human-Wildlife Coexistence.” 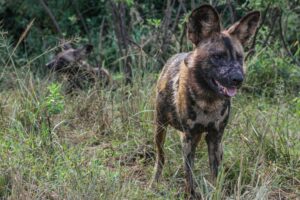 The stories behind both groups of Wild Dog are truly special. The male group lost their pack’s only female last year during the denning season and, remarkably, attempted to raise their puppies on their own. Unfortunately, when the puppies were around 5 months old, the natural drive of the males to find mates for the next breeding season caused them to start moving large distances and resting in more risky areas, which ultimately resulted in the death of the two puppies.

With growing fears of the males leaving the confines of the park as they broadened their search for females, HiP’s Management, alongside Wildlife ACT and the Endangered Wildlife Trust, worked quickly to capture the males in order to bond them with the two females which were already being housed in the Hluhluwe Boma.

The females’ story begins when they were tragically left to fend for themselves, at less than a year old, after losing both their parents to lions. Against all the odds, they survived and made their way south into the iMfolozi section of the park, covering large distances in their natural drive to find males and form their own pack. After repeatedly breaking out, there was an urgent need to intervene to mitigate potential conflict. 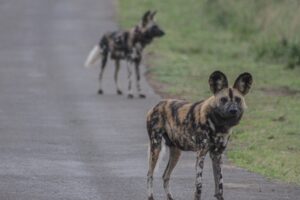 Initially, the males and females lived in two adjacent compartments of a predator holding facility, commonly referred to as a boma, in the Hluhluwe section of the park. This passive bonding method allowed the dogs to get to know each other through the separating fence. Over time they began to sleep on this central fence and were soon excitedly following one another up and down the fence line.

Once the monitoring team were comfortable with the interactions, a decision was made to dart all the individuals and use the rub bonding method in which every individual is rubbed on one another to get as much scent of the non-familiar dogs. This method uses the dog’s sense of smell to minimise aggression between each other, as the individuals can smell themselves on the unfamiliar dogs and are then more accepting of them in their space. Once the dogs were woken up, they were monitored closely to ensure success. The dogs then spent another few weeks in the boma being monitored daily by the Wildlife ACT Hluhluwe team to ensure the individuals had formed a cohesive and tightly bonded pack before they were released into the park. 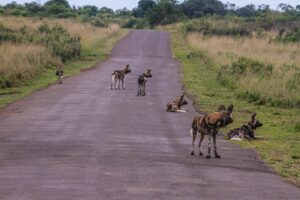 Before their release, all six pack members were fitted with tracking collars to enable daily monitoring of their movements, behavioural dynamics, ecological influences, diseases, snaring incidents, and to mitigate any human-wildlife conflict issues. The information gathered allows for informed decision making – both at the reserve and the species level.

“Now that they have been released from the boma, we are hopeful that this pack will thrive and that the new genetic line created will continue to contribute to the HiP wild dog population and the metapopulation around Southern Africa in years to come.” Hluhluwe iMfolozi Park Ecologist, Ezemvelo KZN Wildlife.

This project is a partnership between Ezemvelo KZN Wildlife, Wildlife ACT and the Endangered Wildlife Trust. It is supported by generous contributions from the Hans Hoheisen Charitable Trust, the Gabrielle Faickney Charitable Trust and a group of passionate individuals, the Jocks of the Bushveld.

Wildlife ACT is a team of experienced conservationists performing critical on-the-ground work in order to save endangered and threatened species from extinction.