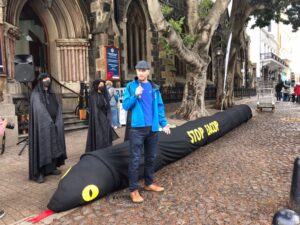 Yesterday, The Green Connection launched its public awareness and information sharing campaign – which is part of a bigger initiative, called Who Stole Our Oceans – in a bid to stop further government investment in fossil fuels, particularly offshore oil, and gas.

According to The Green Connection’s Strategic Lead Liziwe McDaid, the goal of the public campaign is to popularise the issues relating to these offshore projects, especially highlighting the potential impact on the ocean and on the small-scale fishers who depend on it.

She says, “Since the ocean is a natural resource that belongs to everyone and decisions taken now could impact South Africans for generations, it makes sense that civil society must have a say. In addition, we believe that government should deal more decisively with the climate crises and should be moving the country toward a just transition.” 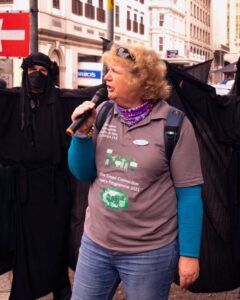 Joined by small-scale fishers and various other civil society organisations (Coastal Links, Masifundise, Extinction Rebellion, 350.org, Africa Climate Alliance), the eco-justice organisation is calling on government to end the country’s dependence on fossil fuels – particularly to stop all offshore oil and gas projects – and instead to focus on the just transition to renewable energy.

“Our campaign’s core focus has always been to protect the ocean everyone, with special consideration for the livelihoods of coastal communities, since they are the ones who bear the brunt of the impacts from oil and gas exploration. There is the risk of oil spills, which comes with oil production and operations – which form part of oil exploration, such as seismic surveys – stress marine animals and fish, which coastal families depend on. We must also recognise that coastal communities are already hit particularly hard by the escalating climate crises and increase in extreme weather events (floods, heatwaves, and droughts). Yet, these already-marginalised communities must often fight to have their concerns and livelihoods recognised. Far too often, affected communities are forced to give up time from their work (losing income in the process) to come out to protest or go to court, because there was no meaningful consultation with them, as affected parties.”

This is primarily why The Green Connection supports those opposing offshore oil and gas projects. McDaid will be in Gqeberha to support those communities opposing Shell in court, next week. 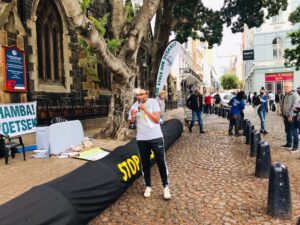 The eco-justice organisation’s Community Outreach Coordinator Neville van Rooy adds, “Any project that harms people, their livelihoods, or their way of life, is not justifiable nor sustainable development but exploitation. On this Africa Day, we want to remind South Africans that under the climate crisis, food security is a critical part of building resilient communities, and those on the coast need a functioning marine ecosystem to ensure future food security. In addition, cultural practices that depend on the ocean could also be compromised, and generations of coast-based livelihoods, along with the heritage of indigenous Africans, could be undermined with offshore oil and gas exploration. And yet, most benefits go to the large oil companies, with a few trickle-down benefits locally.” 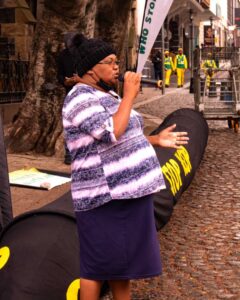 Small-scale fisher Carmelita Mostert from Coastal Links Saldanha Bay says, “To those companies interested in oil and gas drilling on our coast, we have a strong message for you, stay out of our ocean! We cannot eat oil and gas, and it will damage our main source of food. We live and eat from the ocean and therefore we need our oceans to be “clean and safe” for healthy fishing for a sustainable living. We say “No!” to oil and gas drilling.”

Small-scale fisher Solene Smith from Coastal Links Langebaan says, “Our communities face a lot of challenges, and with the threat of Karpowerships and the persistent attempts to conduct seismic surveys (which are related to oil and gas extraction), we face even more (unnecessary) obstacles. We are traditional fishers who love our oceans, and we will not allow anyone to come here to put our oceans in danger. We do not want oil and gas drilling in our oceans. This is not only our heritage to protect for our future generations – our ancestors have been here for centuries – but this is also how we make our living. The ocean is our livelihood, and we want a say in what happens to it. At least our local municipality has indicated that they are eager to help us protect the oceans. Even though we know that there are many mountains to climb, we will never give up.”

Glen Tyler Davies from 350 Africa says, “We have joined The Green Connection’s event to protest the exploration for oil and gas in the sea, off South Africa’s shores. We particularly want to say to financial institutions, especially the Development Bank of Southern Africa (DBSA), that it should not be financing these sorts of exploration activities. Fossil fuels are not the future, and they certainly are not leading to development in Africa and in South Africa. So, we are saying to the Development Bank of Southern Africa needs to immediately commit to not funding any fossil fuel projects and in particular the Karpowership project, to burn gas in South African ports to create electricity.”

Program Coordinator at the youth-led movement African Climate Alliance, Michelle Mhaka says, “It is critical that we capacitate our youth in the current climate. It is important that they, the leaders of tomorrow, know the best practices as well us understanding what are harmful. The youth must be part of the discussion of how we collectively move toward a common liberated Africa, on all fronts.” 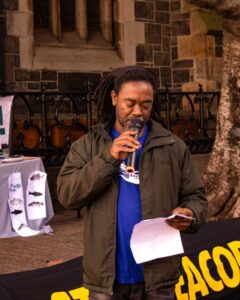 Masifundise Development Trust is another organization that works towards the empowerment and capacity building of small-scale fishing communities across South Africa.

According to Jonathan Julius, “In our work with small-scale fishing communities on the coast, over the past 20 years, our goal – much like The Green Connection’s – is to empower coastal communities, so that they can advocate for their own rights. The connection small-scale fishers have with the oceans must be recognised, along with their right to be able to craft a sustainable livelihood from the oceans they depend on. This is why we oppose offshore oil and gas, because it infringes on the rights of the country’s small-scale fishing communities, especially their right to food security.”

Extinction Rebellion called for support to stop the oil companies from building the East African Crude Oil Pipeline (EACOP), which is likely to displace communities and lead to endangered wildlife. The group’s call was on the need to stop such projects from happening, as it brings the world closer to a full-blown climate catastrophe. Extinction Rebellion says, “The future of Africa relies on building sustainable, diversified and inclusive economies – not by letting huge multinational corporations extract resources and keep the profit.”