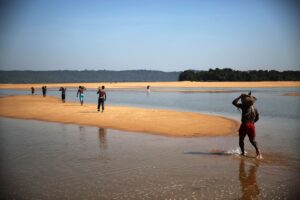 Members of the Munduruku indigenous tribe carry rocks on the banks of the Tapajos River as they prepare prepare to protest against plans to construct a hydroelectric dam on the river in the Amazon rainforest in 2014. Image: Mario Tama / Getty

We cannot talk about the Amazon without recognizing the importance of the Tapajós basin. With continental dimensions, this freshwater ecosystem is rich in scenic beauty, socio-environmental attributes and biodiversity. This territory has been inhabited for thousands of years by traditional communities that protect it. Today the basin and its most famous river, the Tapajós, are under threat from infrastructure projects such as hydroelectric dams, illegal mining and deforestation.

To increase society’s knowledge of the region, international NGO International Rivers has launched the study Tapajós Under The Sun.

“We want to bring light to one of the main hydrographic basins in the Amazon region, which, despite its importance for global biodiversity, is constantly the target of the new wave of expansion of agribusiness, mining and infrastructure, such as large and small hydroelectric plants that are being aggressively installed in the area: today the region has more than 40 hydroelectric plants planned, in addition to the small hydropower dams (PCHs) that are being studied, and other infrastructure works such as waterways and railways (a strategy known as ‘Arco Norte’). The study began to be developed in early 2020 and is part of our work in the Andes-Amazon region, supported by the Betty & Moore Foundation,” explains Flávio Montiel, director of International Rivers in Brazil.

“The Tapajós region still has important features of preservation, but if not defended in time, it will have serious environmental and social consequences, as we have already seen in the Xingu and Amazon region. We need to put our eyes and commitment on the Tapajós River and its tributaries to ensure the safety of the populations that live there.”

“For us, the Tapajós River is a sacred river. It was created by Karosakaybu (an ancestor revered by the Munduruku). Some Munduruku turned into fish, others into birds, others into trees, others into local pigs. We know how this river was built, and it is related to our history and that of the forest”, says the indigenous leader Cacique Juarez Saw Munduruku from the village of Sawré Muybu.

“The Tapajós River is a precious river. It is a road, a source of drinking and bathing. It is also a storeroom: There are tracajá, fish, all these animals that are very important to us,” explains Father Edilberto Sena, leader of the Tapajós Vivo Movement.

“Tapajós Sob o Sol” is composed of five chapters prepared by researchers linked to different institutions in Brazil and abroad.

The study presents aspects of the region’s biodiversity and geomorphology, the sociocultural importance of the area, including sacred places and the vast presence of archaeological items dating back more than 10 thousand years, an in-depth analysis of the socioeconomic aspects of free and healthy rivers, a reinforcement to the ecological economy, ending with updated data on threats and conflicts in the basin involving illegal logging, large mining, mining, palm trees, deforestation, large estates, and more recently, large infrastructure works, such as hydroelectric dams, waterways and highways.

Among the highlights, the study points out the importance of preserving the region as a heritage of human history, revealing that artifacts such as projectile points made of chipped stone have been found in different places of the Tapajós and its tributaries.

“Such objects suggest that the first humans roamed the region millennia ago, possibly still in the transition between the Pleistocene and Holocene, that is, about ten thousand years ago”, says the publication.

The study also reinforces the unique biodiversity that occupies the region and its fundamental role in the balance of the Amazon ecosystem: the site serves as a habitat for 840 species of ichthyofauna (a set of fish from a region or environment), many of which are endemic (only found in this region).

In addition, the publication reveals the increase in requests for construction of infrastructure projects, such as hydroelectric dams, and reinforces with historical data from similar areas that such projects are not economically positive over the long-term, and not genuine actors for employment and progress generators or financial gain in the long run.

The publication also warns about the contamination of mercury in the region, a heavy metal used in mining throughout the Tapajós basin, especially in the Itaituba region and in the tributaries of the Teles Pires River. According to the study, it is estimated that during the 1980s, more than 120 tons of mercury per year were dumped into the basin, and currently high concentrations of mercury have been found in indigenous and riverine populations of the Tapajós River, well above the levels recommended by the World Health Organization (WHO).

The study was developed by researchers Bruna Cigaran da Rocha, Ricard Scoles, Bruno Peregrina Puga and Ana Blaser. The study was supported by the Moore Foundation.

International Rivers is a global organization with more than 35 years of work and regional offices in Africa, Asia and Latin America. The group works so that riverside communities and people affected by dams have their voices heard and their rights respected. The organization helps create active and well-instrumented networks of civil society groups and conducts independent, investigative research to protect rivers and defend the rights of communities that depend on them.