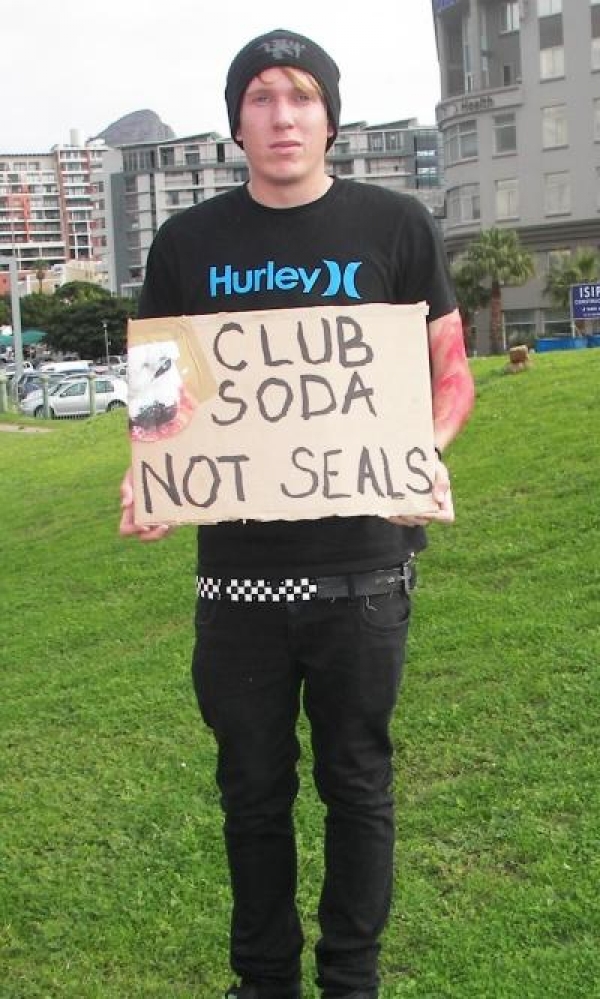 ‘The quota this year has been set for 85 000 baby seals that are still nursing from their mothers’ teats. These are beaten to death with pick handles so that their fur pelts may be sold for US $7.00 A further 6 000 adult bull seals will be shot at point blank range so that their penises can be used to make an ineffective aphrodisiac,’ said Pat Dickens, co-ordinator of Sea Shepherd South Africa, at a protest against seal clubbing in Namibia held at the V&A Waterfront recently.

Another protest was held two days before in Bryanston, Johannesburg. Big notices with witty slogans like ‘Club Soda, not Seals’ and ‘Babies killed for fur’ were waved around. Others simply asking people to ‘Hoot’, attracting lots of attention. The protesters handed out flyers with more details about their concerns.

‘Namibia is now responsible for the largest slaughter of wildlife on earth,’ Dickens says. The Namibian Government claims that they’re doing this to protect their fisheries.

‘They omit to mention that since independence they increased their annual fishing harvest from 300 000 tons to 600 000 tons without doing any sustainability studies. This has resulted in several mass die offs of the seals due to starvation, the most recent being in 2006 where some 350 000 seals died,’ Dickens says.

‘This is the largest mass die off of any marine mammal in recorded history.’ 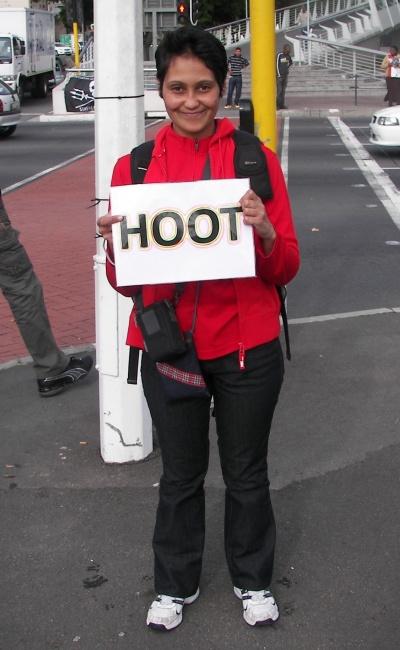 Dickens says The Ministry of Fisheries of Namibia have grossly mismanaged their resources.

‘When South Africa ended its own seal culling policy in 1990, there were similar concerns from our own fishing industry. However, with good management, our fishing industry has seen nothing but positive growth over the years. Independent research done by Norwegians in the Benguela current has laid the blame of the decline in Hake stocks on overfishing and shows no correlation to the seals.’

‘If one looks back in history, when Namibia was still under South African administration, the annual quota for seals was as little as 9 000 and the colony stood at over two million (more than double what it is today). Fish stocks were abundant. If the seals are to blame, why then are the pups being targeted? They are not even eating solids and are still dependent on their mothers’ teats. Is it simply coincidence their soft pelts are more valuable?’

With regards to revenue, Dickens says the culling generates about N$500, while seal viewing generates N$1 million.’They also claim that the slaughter provides much needed employment, yet the number of workers (who are only seasonally employed) has dropped from 160 to 81, while the quota has increased from 30 000 to 91 000.’

Dr Debbie Gibson of the Namibian SPCA was asked to comment on the slaughter, and saw 260 pups killed on one day (only about 0.1% of the total). ‘In her opinion, and from what she observed, she made a rash statement that the slaughter was being done in accordance with the rules governing the practice. She concluded the massacre was humane,’ said Dickens.

The Namibian Animal Protection Act of 1962 expressly forbids beating an animal to death. The act gives mandate to the SPCA to arrest and detain anyone found guilty of contravening the law.

‘What is really bizarre here is that according to the semantics of Namibian law, a seal is not classified as an animal. Gibson and lawyers representing the Namibian SPCA are using this excuse to justify their ineptitude and consequently have refused to get involved.’

You can view the Namibian SPCA statement regarding their position here.

The Seals of Nam are encouraging the world to boycott Namibia, with the help of Beauty without Cruelty and Sea Shepherd to name but a few.

‘Implementing a boycott on any country is used as a final resort. Our decision to do so was not taken lightly as we are very aware of the negative economic impact it will have on people on the ground. We have exhausted all possible avenues.’

‘The Namibian Government is adamant that they will not be prescribed to by former colonialists and that the matter is an internal one. Our boycott campaign is aimed at the country’s tourism as well as a multitude of businesses that contribute towards their GDP.’

An e-mail campaign targeting the international tourism industry is underway.

‘Our letters have been translated into French, German, Italian and Russian and we are requesting that travel agencies do no promote Namibia as a destination. The effects of the boycott are already felt; a South African travel company recently wrote an open letter to the Namibian Government urging them to end the slaughter due to the negative impact.’

The Seals of Nam will continue to stage an increasing number of demonstrations both locally as well as abroad until the slaughter is permanently ended. They have the support and backing of a growing number of South African celebrities and are broadcasting their statements via You-tube and other social media to generate further awareness. 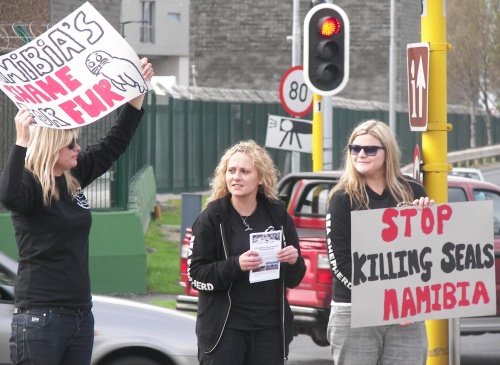 The Seals of Nam are planning to prevent the Namibian rugby team from participating in the 2011 World Cup.

‘There has been very little media focus on the Namibian seal slaughter. The vast majority of the developed world hardly knows what is happening. By implementing the boycott, we have had numerous articles published both locally as well as abroad and the world is waking up to the barbaric practice. People are outraged and this is adding additional pressure on the Namibian government to end the practice.’

The Welsh Rugby Union, The Fiji Rugby Board, The South African Rugby and Football Union have been contacted on this matter, as well as the International Rugby Board and the rugby boards for Australia and New Zealand.

‘The Namibian Rugby Board says they don’t think we are a threat and will proceed with their preparations. Our international partners are planning on staging protests outside the stadiums should they play and we will be asking teams forced to play to show solidarity by wearing armbands to voice their disapproval of the massacre.’

At the moment, HatemYavuz, a Turkish national, has the rights to the seals until 2019.

‘It is time that the people of Namibia began to benefit from this marvelous resource instead of having their economy destroyed and being exploited by a foreign businessman who sucks the revenue out of the country so he can live the high life by not providing any form of profit sharing for the peasants who live in tin shacks and are unable to support their families,’ Dickens says.

The Cape Fur Seal is listed on Appendix II of United Nations Convention on International Trade in Endangered Species (CITES) as well as on the Red List of the International Union for the Conservation of Nature (IUCN), indicating that their numbers are vulnerable and they can’t afford to be clubbed.

‘The solution would be for Namibia to immediately end its slaughter policy and protect these animals. We would like to see Namibia promote the colony as a major tourist attraction and market the seals in much the same way that South Africa does with its Big Five. Niche markets for seal guano can be developed. This would lead to skills development, tourism and conservation management, public relations, investment, ecotourism opportunities and provide many jobs.’