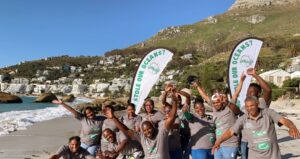 Earlier in this month dedicated to remembering Madiba and the principles he held dear, The Green Connection handed over the verdict statement – as deliberated by an esteemed jury, at its Oceans Tribunal in September 2021 – to the Presidential Climate Change Commission.

In the spirit of Ubuntu, civil society (coastal communities especially) want to ensure that they have a say in the just transition to renewable energy, which should include meaningful public participation on any proposed offshore oil and gas developments that could affect them and their environment, or which could exacerbate climate change and harm the ocean.

The Green Connection’s Community Outreach Coordinator Neville van Rooy says, “After nearly three decades of democracy, this month is supposed to be dedicated to celebrating the memory of Nelson Mandela and thinking about how far we have come since the days of oppression. However, in this month of Moral Regeneration, South Africans instead remain preoccupied with persistent loadshedding, which is happening at the same time that electricity prices continue to rise to unaffordable rates, while also having to deal with an unacceptable increase in violent crime and nearly daily revelations of government corruption. The need for socially driven solutions, which will require more transparency from government, has never been more urgent.” 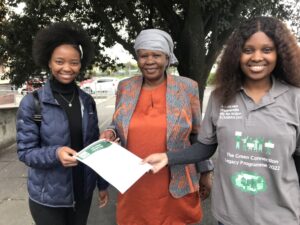 The Green Connection’s Oceans Tribunal was attended by more than two hundred (200) community representatives and eco-justice activists from various coastal regions (both in SA and abroad), the Tribunal aimed to provide a platform for coastal communities to speak about the challenges that offshore oil and gas projects could pose to their livelihoods. One of the key issues that stood out, across the board, was the lack of meaningful consultation and engagement with affected communities, despite it being a legal right.

“Many coastal communities are facing the threat of offshore oil and gas, driven by national agendas and international corporations. As these are the people who could potentially lose their livelihoods, as a result, they should have meaningful spaces to deliberate on the alternatives and to identify suitable local development initiatives that would benefit them,” adds van Rooy.

The jury panel – which included Nnimmo Bassey (Nigeria), Professor Loretta Feris (South Africa), Allison Tilley (South Africa) and Jesu Rethinam Christy (India) – listened to testimonials from coastal communities and other experts and made several recommendations for a sustainable and inclusive way forward. This includes a call to government to revisit the plans for Operation Phakisa, which has an entire economy planned around the ocean, but which was formulated without consultation with fishers and fishing communities.

The Green Connection’s Legacy programme has been instrumental in mobilising young activists and small-scale fishers to protect South Africa’s oceans:

Small-scale fisher from Steenberg Cove West Coast Christian Adams says, “We are the ones who depend on the oceans and coast for our livelihoods, and we are the ones who have a deep historical and cultural connection with the ocean and our coast. It only makes sense that any policy that governs the ocean should be created in consultation with coastal communities, to ensure that our rights are recognised and respected. Government and the oil and gas companies should not make any plans for the ocean without drawing on our historical and traditional knowledge, and we expect them to respect our customary way of life, which ultimately seeks to preserve the oceans and coast as a shared resource for the benefit of current and future generations.”

Adams says, “As such, we do not agree with the campaign to commodify our oceans, for exploitation by a corporate and political elite. Instead, we want a just transition to renewable energy. This transition should be inclusive and should include opportunities for community ownership of the renewable energy industry in their local regions.” 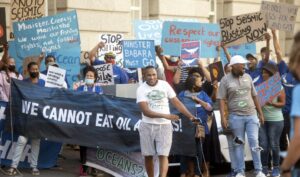 Small-scale fisher from Port St John’s Ntsindiso Nongcavu says, “South Africa’s small-scale fishers call on government to declare a moratorium on further oil and gas exploration, and instead to embrace the new economic opportunities that will be created by an emerging renewable energy sector. This would much better serve the public interest, while also being better for our environment and oceans. However, in the past months, fishers on the west, east and south coast have been forced to fight for the right to be properly consulted. We grow increasingly frustrated that the people are unable to access the rights promised to us in the Constitution. With our voices, we will make it clear that we no longer want an economic system that depends on exploitation or extraction of polluting and climate change-causing fossil fuels. We want an economy that respects our natural resources and recognises that the people need a healthy environment to live.”

Nelson Mandela stood for justice and equality. After spending 27 years in jail, Madiba spearheaded the development of a constitution which sought to ensure that all South Africans have rights, which till then, had been denied to the majority. However, one has to wonder what Madiba would have thought of the current situation where civil society is regularly forced to fight its government to ensure that their rights are respected and to protect the environment they depend on.

The Green Connection has a petition to stop offshore oil and gas, as part of its Who Stole Our Oceans campaign.