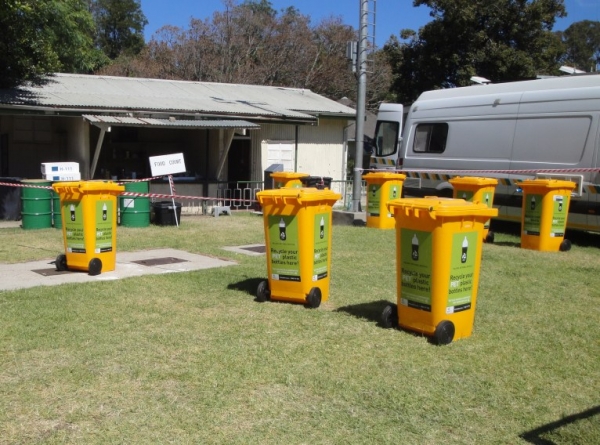 Scores of firefighters, volunteers and Working on Fire crew were deployed to temper the fires in the Franschhoek Mountains. Friends rose to the occasion with the generous donation of bottled water, beverages and food.

The fires broke out on Sunday the 27 Jan 2013 on Franschhoek’s northern mountains, burnt up the mountain valley, along the top of the northern range of the Franschhoek Mountains, heading towards the Wemmershoek Dam.

The rest of the week they spread, fuelled by South Easterly winds, through the Wemmershoek valley over the mountains and into Paarl. Unconfirmed reports note farm damage, damage to the Freedom Hill Estate as well as residents of Pearl Valley Golf Estate being evacuated as a result of the fires that raged well into the week.

PETCO, at the request of volunteers from the area, put a call to their members and the South African National Bottled Water Association, shortly after news hit, calling for the donation of bottled water to quench the thirst of the firefighters. Feedback received from members saw Oasis, Durr Bottling, Nestle Waters, Penbev, Pick ‘n Pay, Ceres Spring Water and La Vie de Luc Mineral Water donating in excess of some 5320 litres of water.

This arrived during the course of the week, and was eagerly consumed by the thirsty crew who only had access to refreshments they could carry on foot. PlasticsISA’s John Kieser assisted with the delivery of bins for the collection of the empty bottles which will be taken to Wasteplan, and recycled.

“PETCO lauds the generosity of its members, and as the industry body for recycling of PET, we see this as an ideal opportunity to not only meet a need, but to encourage responsible consumption and raise awareness about recycling” said CEO Cheri Scholtz, “it would be irresponsible of us to see all this water being sent to help the efforts, but to ignore the waste generated as a result, hence PETCO ensured the bottles were recycled”.

As a result of PETCO’s efforts, 2011 saw tonnages of post –consumer PET bottle recycling rising from 9 840 to 42,562 tonnes or from 328 million bottles collected in the first year to over 1.4 billion bottles recycled in 2011, that is close to some 4 million bottles recycled each and every day! We have grown from 16% to 42% of beverage PET recycled, from 87 000 to 145 000 tonnes of PET resin produced, and from small to large amounts of recycling levies collected. PETCO, along with other industry players helped to establish over 430 plastic recovery stations throughout South Africa generating almost 26 000 indirect income opportunities, reducing poverty.

Similarly, our members have contributed to job creation and skills development as well as the development of infrastructure estimated at R 300 million in replacement value. We continue to provide millions of Rands worth of financial support to PET recycling companies in order to ensure that post-consumer bottles are collected and that there is an assured market for them – all part of the PETCO raison d’etre.