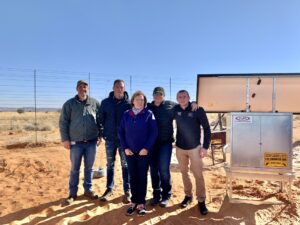 The project team at one of the installation sites in the Northern Cape. From left to right: Darren Pietersen (Tikki Hywood Foundation), Francois Marais (Stafix), Machel van Niekerk (Kalahari Wildlife Project), Helena Atkinson (Pangolin.Africa) and Nico van Wyk (Stafix). The energizer box can be seen on the right.

Pangolin.Africa, the Tikki Hywood Foundation and the Kalahari Wildlife Project, in collaboration with Stafix electric fence and security company, are currently working on a ground-breaking new project in an effort to drastically reduce the accidental electrocution of pangolins on electrified fences.

These electrical installations – prevalent on game reserves, private game farms, nature reserves and commercial livestock farms across southern Africa – are one of the biggest threats facing the Temminck’s Pangolin.

Studies have found that as many as 1,000 of these pangolins are killed on electrified fences every year in South Africa alone, probably overshadowing the illegal wildlife trade as a threat to pangolins in the region. 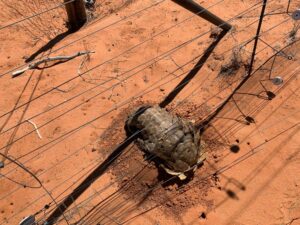 A pangolin caught in an electric fence. Image: Helena Atkinson

This project aims to assess the effectiveness of new technology to significantly reduce – if not entirely prevent – vertebrate mortalities related to electrified fencing while still maintaining the integrity and primary function of the electrified fences.

The Temminck’s Pangolin is bipedal, walking on its hind legs with its front legs and tail held off the ground. When encountering an electrified fence its head or unprotected underbelly usually receives the initial shock. The result is that the pangolin will adopt its natural defensive position of rolling into a ball and, in doing so, often inadvertently wrapping itself around the electric wire. Each consecutive shock causes the animal to curl even tighter around the wire until the successive electrical pulses – or exposure – ultimately result in death.

Pangolins are not the only wildlife species adversely affected by electrified fences. More than 35 vertebrate species have been recorded being killed on these security installations in South Africa to date, including tortoises, snakes, chameleons, and small antelope. 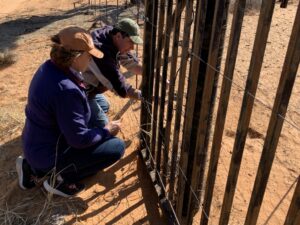 The pilot phase of the project involves developing and field testing the proposed solution by fitting a limited number of existing electrified fences with the new energizer design. Field trials are already well advanced on the various project study sites, which include Timbavati Private Nature Reserve in Limpopo Province, and Glen Lyon Kalahari Nature Reserve and several livestock farms in the Northern Cape Province of South Africa. These sites represent the various habitats and land uses present in South Africa and are thus ideal for testing the new system.

If proven to be effective, the next phase of the project will entail the team supporting landowners across southern Africa with retrofitting their electrified fences with the new system.

The development and roll-out of this project has been made possible through funding and support from Save Pangolins, Stafix Electric Fence and Security Centre, JVA Technologies (Australia), and the Oppenheimer foundation. The project team is also grateful to installation partners Maclin Power Fencing, Stafix Kimberley and Stafix Polokwane for funding installation costs and generally providing support and advice to the project. Security engineering company Protoclea is also recognised for initially conceptualising this potential solution.